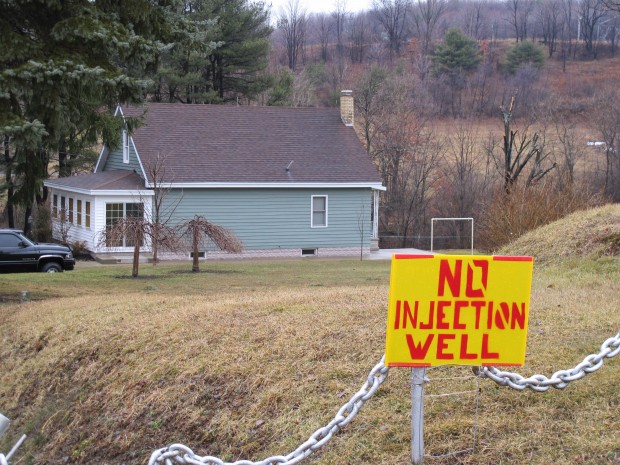 A sign protesting a proposed deep injection well sits on the lawn of a home in Brady Township, Clearfield County. Community opposition to deep injection wells is strong because of links with earthquakes and fears of drinking water contamination.

Pennsylvania officials approved the latest underground injection well to hold wastewater from oil and gas drilling operations.  The move renews concerns about whether nearby residents will have their drinking water contaminated or if it will increase seismic activity.

The Department of Environmental Protection said last week that it had approved a plan by Sammy-Mar, the operator of the Povlik #1 well, in Huston Township, Clearfield County. The well, which is licensed to contain produced fluids from the oil and gas industry, is the 11th to be permitted in Pennsylvania, according to Lauren Fraley, a community relations coordinator for the DEP.

Scott Perry, the DEP’s Deputy Secretary for Oil and Gas Management, said the new well would be safe. “DEP’s review process included a thorough evaluation of the application, plans, and public feedback,” he said. “The department ultimately concluded that the well would comply with all regulations and include adequate safeguards.”

Critics say underground injection wells risk causing earthquakes because of the large volumes of water being pumped into them. Earlier this year, Pennsylvania DEP confirmed the first gas drilling-related earthquakes in the Commonwealth.

To address those concerns, DEP officials attached conditions to the latest permit, requiring the operator to install seismic-detection equipment, and ensure that data gathered is reported in a timely manner. The conditions were also attached to two other injection wells, in Elk and Indiana Counties, approved by DEP in March.

Evidence of links between injection wells and seismic activity is high in Oklahoma, a state with intense oil and gas activity, which has more than 3,000 of the wells, and experienced some 7,000 earthquakes in 2015 or three times that number in California. Nearly two-dozen peer-reviewed, published papers have concluded disposal wells and quakes are likely connected, the New Yorker reported in April 2015. In November 2011, a 5.7-magnitude temblor injured residents and damaged 200 buildings.

Some environmentalists warn that the risks of seismic activity will only increase as Pennsylvania’s natural gas industry grows.

“Between unforeseen geological issues with the well itself (seismic or not) and the possibility of spills and leakage while transporting the waste, there is always a potential to impact ground water,” said Rob Altenburg, head of the energy program at the environmental group PennFuture. “Dealing with the waste products of unconventional gas drilling is a significant issue, and it’s only going to get larger as production increases.”

The new DEP permit is in addition to one issued by the U.S. Environmental Protection Agency in March 2016.

The oil and gas industry uses injection wells to dispose of waste water, which has a high salt content, as well as chemicals, heavy metals, and radioactive material.