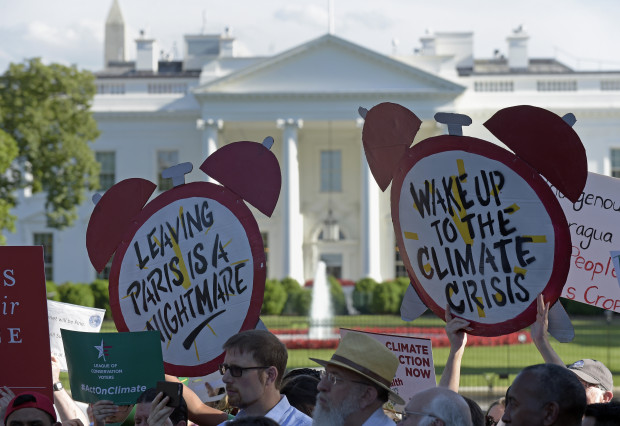 Protesters gather outside the White House in Washington, Thursday, June 1, 2017, to protest President Donald Trump's decision to withdraw the Unites States from the Paris climate change accord. Three suburban Philadelphia congressmen had urged Trump to remain in the agreement.

President Trump’s decision to pull the U.S. out of the landmark global climate agreement is for the most part supported by Republican lawmakers. But a look at the Philadelphia suburbs, where Democratic presidential candidate Hillary Clinton beat President Trump in the four surrounding counties, shows GOP congressmen not in lock step with the President over climate.

The three Republicans who represent the 6th, 7th and 8th congressional districts – Ryan Costello, Pat Meehan and Brian Fitzpatrick – are all members of the Climate Solutions Caucus, a group trying to create bipartisan support for climate legislation. Twenty-one members of the caucus, led by Florida congressmen Carlos Curbelo (R-26) and Ted Deutch (D-22), signed a letter urging President Trump to stay with the Paris Agreement.

“Remaining in the UNFCCC will strengthen American leadership on environmental stewardship and help transform today’s low-carbon investments into trillions of dollars of clean energy prosperity,” wrote the Congressmen. “Withdrawing would mean squandering a unique opportunity to promote American research, ingenuity, and innovation.”

Ryan Costello represents the 6th district, which meanders through Montgomery, Chester, Berks and Lebanon counties. Costello says he’s disappointed by Trump’s decision. With the U.S leaving the accord, he says that puts China in position to emerge as the technological leader on challenges like renewable energy storage.

“I think from a capital investment perspective, as well as an environmental outcomes perspective, we’re very much aligned to be able to do both at once and to be the leader, and not allow China to have a more outsize role in this as a result of us withdrawing from the accord.”

Costello says he and his climate caucus colleagues are still trying to push Congress to act on things like carbon capture. But there’s little support for climate legislation in the Republican controlled House.

Seventh district Congressman Pat Meehan, who represents most of Delaware County, along with parts of Lancaster, Chester, Montgomery and Berks counties, did not return a request for comment but released a statement saying he would continue to push for climate legislation.

“Climate change is a serious issue, and it’s prudent that Congress takes steps to mitigate the risk it poses,” said Meehan. “There are bipartisan, market-based solutions that will spur investment and innovation in clean energy sources. By pursuing them, we can reduce emissions, alleviate the damage caused by climate change and create good-paying jobs.”

Congressman Brian Fitzpatrick, who represents Bucks and parts of Montgomery County, also signed on to the letter and released a statement.

“Last month, I joined members of both parties in urging the President to remain in the agreement and to keep our seat at the table, and our words are worth repeating: ‘The world’s leading nations must work together… It is imperative that we maintain our seat at the table in global discussions of how to address the threats posed by climate change.'”

“The Obama administration went about signing on to the Paris Agreement in ways that didn’t involve congress in any way shape or form,” he said. “From a process perspective and some of the constitutional considerations associated with how the Obama Administration went about carrying out its policies domestically is probably a larger and more significant point that is raised by my colleagues.”

The Obama Administration did not seek Senate approval for the Paris Agreement because it said it didn’t have the votes. Previous efforts to address climate change in Congress failed because it lacked Republican support.

While Democrats are eager to take back seats in the 2018 mid-term elections, it’s not clear how environmental issues will play out. Political pollster Terry Madonna says in the past climate and environment are low on the list of priorities for voters.

“But I think this is going to be more important in 2018 and I think the Democrats in particular are going to make a big deal of it,” said Madonna.

It will take several years for the U.S. to officially pull out of the Paris climate agreement. In the meantime, Madonna says a lot could happen between now and November, 2018.

Corrections: A previous version of this story contained an editing mistake and misquoted Congressman Ryan Costello as saying “constant considerations,” while the correct quote is “constitutional considerations.” It also mistakenly referred to Pennsylvania’s 8th district congressman as Mike Fitzpatrick, who formerly represented the 8th district. The current congressman is Brian Fitzpatrick, and the story has been updated with his statement.

PA, Philadelphia will press on with climate policies despite Trump withdrawal from Paris pact