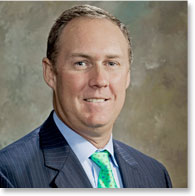 One of Pennsylvania’s top utility regulators is walking back controversial remarks he made about pipeline opponents at a gas industry conference this week.

He now says using the word was inappropriate.

“I used the word “jihad” while characterizing the actions of individuals who have engaged in threatening or disruptive behavior: interrupting public meetings, preventing officials from speaking, harassing federal and state regulators along with their families, and otherwise attempting to halt the public discussion about important infrastructure projects,” Powelson writes in an emailed statement. “In retrospect, that was an inappropriate choice of words.”

Powelson is reportedly being considered by President Donald Trump for an appointment to the Federal Energy Regulatory Commission, which has oversight of interstate energy projects. Last year activists showed up at FERC commissioners homes to protest their approvals of pipelines.

“Mr. Powelson used a racially charged term, ‘jihad,’ to not only appeal to the natural gas representatives in the audience, but also to the Trump administration which he is hoping to work for as a commissioner on the Federal Energy Regulatory Commission,” Clean Air Council executive director Joe Minott said in a statement.

“It is just unacceptable that a regulator would have such disregard for public concern,” says Minott.

Others echoed similar concerns and accused Powelson of bias.

“Bringing Islam in as a boogeyman may fit well into an agenda that helps [Powelson] cozy up with Trump and his racist, Islamophobic, greedy cronies,” Tammy Murphy of the Southwest Pennsylvania Environmental Health Project writes in an email. “But it is utterly illogical and wreaks of ignorance.”

The word “jihad” has multiple meanings. It can mean a holy war waged on behalf of Islam, a personal struggle in devotion to Islam, or a crusade for a principle or belief. In current American political discourse, the word is often equated with violent extremism.

“Considering the fact that he’s a candidate for a position as a commissioner at FERC, I think that’s a very biased and troubling statement,” says Lynda Farrell of the Chester County-based Pipeline Safety Coalition.  “Powelson has been very much a supporter of the industry, and we’ve seen–for the most part– the PUC has been very supportive of the gas industry.”

Ralph Blume, a Cumberland County farmer challenging the same gas liquids line, believes Powelson is out of touch with regular people. He cites the industry’s use of eminent domain for pipelines largely carrying products for export.

“He’s gotta be biased,” Blume says of Powelson. “He needs to have one of these pipelines go through his yard and see what he thinks of it then. We need the energy, but we need to keep it here. We need to do it right.”

In his statement Thursday, Powelson said as a regulator, he is a strong proponent of infrastructure development and committed to environmental stewardship and conservation.

Powelson was also accused of bias in 2014 for his participation on the Greater Philadelphia Energy Action Team–  a group of business leaders, politicians, and academics working on ways to expand energy industry in southeastern Pennsylvania. He stepped down from the group after critics said it posed a conflict of interest.