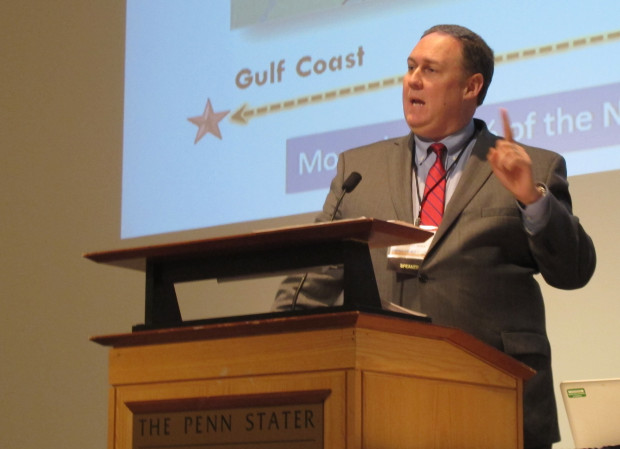 “The jihad has begun,” he told the audience. “At the Federal Energy Regulatory Commission groups actually show up at commissioners homes to make sure we don’t get this gas to market. How irresponsible is that?”

Powelson, a Republican, has served on the PUC since 2008. He’s reportedly being considered by the Trump administration for an appointment to the Federal Energy Regulatory Commission (FERC). The independent agency oversees the interstate transmission of electricity, natural gas and oil. It’s supposed to have five commissioners, but following a resignation last month, it only has two — not enough for the required quorum to make decisions.

Powelson told the industry representatives they have friends in the federal government who want to provide regulatory certainty to businesses. He said he met with President Donald Trump’s staff and would be honored serve as a FERC commissioner if asked.

“I think it would be an honor for Pennsylvania,” he said. “I certainly have the pedigree and resume to do the job.”

He went on to praise the CEO of Dominion– the company building a multi-billion dollar gas export terminal along the Chesapeake Bay in Lusby, Maryland. It’s expected to come online at the end of this year.

He then sharply criticized Maryland Gov. Larry Hogan (R), who called for a ban on fracking last week.

“I find it a little shocking he would come out against fracking because when you look at the pipeline flows into Cove Point, it’s a play on Marcellus Shale gas,” said Powelson. “There are lots of uneducated people around this industry.”

Powelson cited the numerous benefits the shale gas boom has brought the country, including falling carbon dioxide emissions and lower consumer energy prices. He outlined his support for streamlining the pipeline permitting process, by making changes to the National Environmental Policy Act and removing obstacles to eminent domain.

“Over the next decade we have a very unique opportunity as an industry and as government leaders,” Powelson said. “And we’re gonna do it in a way that we’re not cutting corners on the environmental piece and pipeline safety.”

A growing number of environmental and citizen groups are opposing the expansion of fossil fuel infrastructure, citing climate change and other concerns. In recent years, protesters have repeatedly disrupted FERC’s public meetings. But the pipeline industry also faces pressure from some conservatives, who feel the use of eminent domain tramples private property rights.

Powelson sidestepped questions about the use eminent domain, saying only that he believes FERC should do a better job making sure people’s voices are heard.

“I think there are lot of areas for conversation around pipeline siting,” he said. “And I’m keeping an open mind to it.”

Philadelphia schools announce plan to cut energy bills in half