Philadelphia schools announce plan to cut energy bills in half 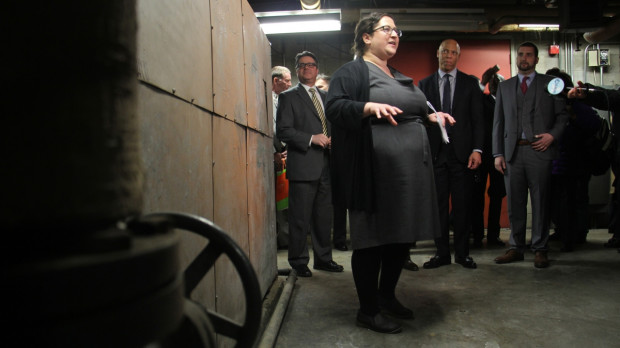 Emily Schapira, executive director of the Philadelphia Energy Authority, talks to reporters in front of an old boiler in the basement of Lankenau High School, an example of the kinds of improvements that could be made under the Energy Pilot Project.

Philadelphia school officials have come up with a plan to use energy efficiency projects to chip away at $4.5 billion in outstanding repairs.

By replacing old boilers, roofs, lighting and other systems with new, more efficient ones, the district said it could save $600 million over the next 20 years and cut its energy bills in half.

This project is part of a larger plan announced by City Council President Darrell Clarke last year to invest $1 billion in public and private dollars in energy efficiency upgrades in all city-owned buildings and public schools, as well as 25,000 low- to-moderate-income homes and 2,500 small businesses.

In January, a report commissioned by the school district of Philadelphia identified more than 12,000 deferred maintenance projects it cannot afford to complete, leaving about 150,000 students, teachers and staff to learn and work in deteriorating conditions.

Lankenau High School in Roxborough is in better shape than many other Philadelphia schools. The roof and windows don’t leak, but the boiler runs on expensive heating oil, rather than cheaper natural gas. Also, the cinder block building isn’t well-insulated and the old pneumatic thermostats don’t always send heat where it needs to go.

“The teacher here also mentioned there are times when the classroom is so cold, they’re actually moving the class to another part of the building,” said Emily Schapira, executive director of the Philadelphia Energy Authority, who led district and city officials on a tour of the school’s problem areas Monday morning.

The city’s more than 300 public school buildings are riddled with problems like these — and worse.

To fix some of them, the district plans to enter into an energy savings performance contract with a company that will guarantee it can save the district money by making upgrades to boiler and HVAC systems, windows, lighting and insulation, for example.

Over time, the district will pay for these projects with lower energy bills, Schapira said. The school district currently pays $45 million annually to power, heat and cool more than 300 buildings. Schapira said the Philadelphia Energy Campaign can bring those costs down to $23 million a year.

“This brings new capital to the forefront… that costs the district nothing more than they pay now,” she said.

Starting this fall, the district will pilot the plan in three schools.

Superintendent William Hite said the schools will be chosen based on certain criteria, including high enrollment, long operating hours, and major building systems in need of repair or replacement.

“And we hope that it provides a significant return on investment,” he added.

Hite said the energy savings will not only help pay for the energy efficiency upgrades, but there will be enough to spare to help pay for other repairs, such as new doors and electrical wiring systems.

The school district has put out a request for proposals for an engineering firm to manage the project and help select the three schools for the pilot. That firm will eventually help select an energy services company to make the upgrades.