Pipeline opponents target FERC in a week of actions 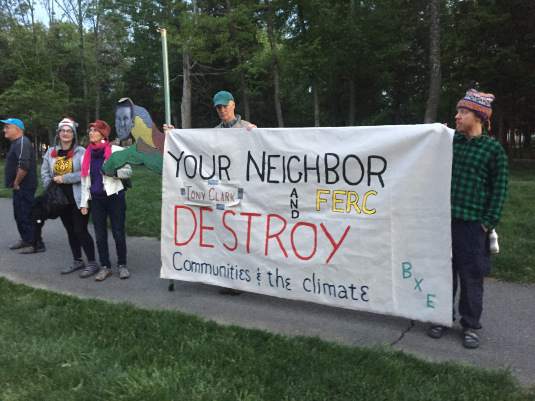 courtesy of Beyond Extreme Energy

The Federal Energy Regulatory Commission is the target of a week-long series of protests by pipeline opponents who say the agency is a “rubber stamp” for industry. Seven people were arrested blocking the driveway entrance to the agency on Monday, while others plan to picket the homes of FERC commissioners, and disrupt the agency’s monthly meeting on Thursday. But the disruption will have to take place outside of FERC headquarters. On Wednesday, FERC decided the public will only be able to view the agency’s proceedings via webcast.
Melinda Tuhus is a spokeswoman for the group Beyond Extreme Energy and was one of those arrested on Monday as part of what the group is calling the “Rubber Stamp Rebellion.”
“The reason we’re going to the commissioner’s homes is, they don’t listen and they need to be held accountable,” said Tuhus.
Tuhus says the agency approves natural gas infrastructure over the objections of local communities and ignores pleas for greater public input. Activists have been protesting FERC’s role in the pipeline building boom for several years now, disrupting meetings and staging civil disobedience outside FERC headquarters in Washington, D.C. Tuhus, a 68-year-old grandmother, says the activists plan to sleep out overnight on the sidewalk in front of the home of FERC chairman Norman Bay Tuesday night, and try to talk to him in the morning when he leaves for work.
“We’re not going away,” said Tuhus. “We’re persistent and we need to keep making noise.”
Tuhus considers herself a climate activist, and says stopping pipelines is the key to stopping the production of more fossil fuels.
FERC has defended its actions in the past, saying the agency does a thorough review of all projects and considers public input registered during the public comment periods for each project. The agency issued this statement about the week of protests:

“The Commission continues to work to assist consumers in obtaining reliable, efficient and sustainable energy. We welcome hearing from the public, we would urge them to make use of the many processes FERC has in place to allow comment on matters pending before the Commission.”

Activists like Tuhus say the protests are starting to pay off. She points to New York state, which recently halted the Constitution Pipeline project by withholding water crossing permits and the FERC’s recent rejection of the Jordan Cove LNG proposal in Oregon.
Pipeline builders and operators say the critiques are unfair. Cathy Landry is a spokeswoman for the Interstate Natural Gas Association of America, or INGAA.
“FERC’s job is to look at these projects, and find out if there’s a public need for the project,” Landry said.  “And frankly, if customers are siging up for these projects it’s because they use natural gas. There’s every indication that we’re going to need more natural gas and pipelines are the safest means of transporting it.”
Landry says natural gas is key to creating an energy supply that includes renewables.
“The need for pipelines is real,” she said. “Everyone wants renewables, but what happens when the sun doesn’t shine and the wind doesn’t blow? Cheap natural gas is what will help offer additional renewables without increasing the price to consumers.”
*This story has been updated to reflect FERC’s decision to close the meeting to the public, which will be able to view the proceedings via webcast only.