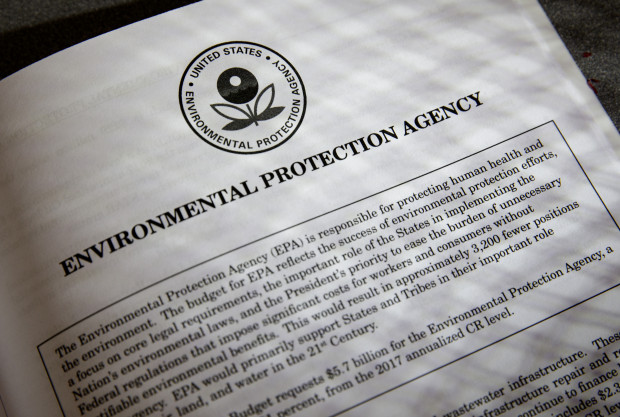 The Trump administration wants to drastically reduce the size of the Environmental Protection Agency. Scott Applewhite

The state’s top environmental regulator is warning his federal counterpart that proposed cuts to the Environmental Protection Agency would have an “immediate and devastating effect” in Pennsylvania.

On Thursday the Trump administration released a budget blueprint which seeks to cut roughly a third of the Environmental Protection Agency’s budget – some $2.6 billion.

In a sharply-worded letter to EPA Administrator Scott Pruitt, Acting Department of Environmental Protection Secretary Patrick McDonnell describes the cuts as showing, “the Trump administration’s disregard for its responsibility to protect the health and safety of American citizens.”

The DEP relies on the federal government for about a third of its funding. Much of the state’s work involves enforcing federal environmental laws, like the Safe Drinking Water Act. The department is already strained by significant staffing shortages, and has seen its state funding decline by 40 percent over the past decade.

In an address to EPA staff last month, Pruitt said “federalism matters” and expressed a hope to have a positive relationship with state environmental agencies.

It doesn’t seem like that relationship is off to a great start, at least in Pennsylvania. McDonnell went on to attack Pruitt’s recent comments about climate science. In an interview last week, Pruitt said he disagrees that “human activity,” or carbon dioxide emissions, is a “primary contributor.”

“It is beyond disappointing that the nation’s top environmental official would call into question the overwhelming scientific consensus and undermine progress on this critical subject,” McDonnell writes. “I urge you to take seriously your responsibility to provide leadership in the effort to reduce greenhouse gas emissions– not to spread doubt and falsehoods.”

DRBC says it's still weighing gas drilling rules, but no decision on the horizon