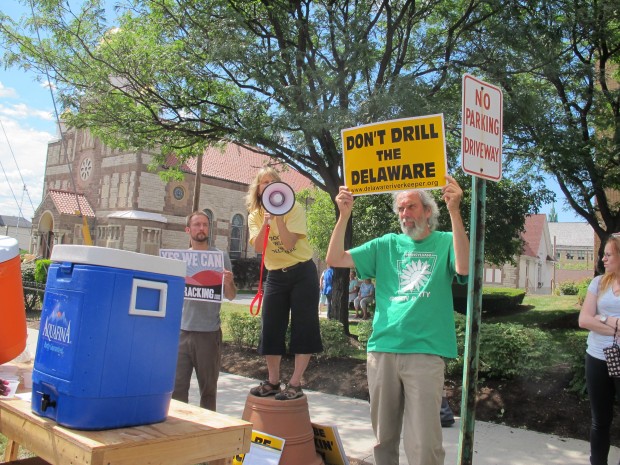 The Delaware River Basin Commission is continuing to examine rules that might allow natural gas drilling in the basin but it isn’t close to a decision, and would submit any plans for a new rule on the issue to public comment, the federal government’s representative on the commission said Wednesday.

Lt. Col. Michael Bliss of the U.S. Army Corps of Engineers read a statement to the commission’s quarterly business meeting, saying that commission staff have devoted “extensive time and effort” to evaluating rules that might allow the commission to lift a de-facto moratorium on shale development in the four-state watershed.

He noted that revised draft regulations on natural gas development were issued in November 2011 but have not been adopted by the commission.

Since the commission put off a decision on the fiercely contested issue in 2011, there have been no proposals for gas development in the DRBC’s jurisdiction, and the commission has processed no development applications, Bliss told the public meeting that was attended by about 250 opponents of gas drilling and pipelines.

“Meetings and discussions are expected to continue in future,” he said.

Bliss said the commissioners and staff will not comment publicly on the deliberations but that “any new rulemaking initiated by the commission will be subject to public notice and comment.”

In a comment that may have been designed to calm the fears of critics who fear an early go-ahead for gas drilling, Bliss said any such move is unlikely soon.

“There are no current plans to take a vote on the draft rules that were published in 2011,” he said. “Any new or continued rulemaking initiated by the commission would be subject to further public notice and comment.

“The commissioners recognize that there is a desire for more information and updates on these matters, and we encourage the public and the media to reference the DRBC website for the most accurate and up to date public information,” Bliss said.

The statement followed a recent upsurge of speculation among critics of the shale industry that there is a renewed effort by state and federal officials to open up the basin to shale drilling.

Opponents of the gas industry point to ongoing discussions between DRBC and state officials; a current lawsuit challenging DRBC’s right to regulate shale drilling, and possible pro-drilling pressure from the Trump administration as potential reasons why the seven-year de-facto moratorium might be lifted.

Tracy Carluccio of the Delaware Riverkeeper Network called Bliss’s words a “non-statement” that may have been intended as a response to resurgent public concern on the issue.

“It adds more opaque-ness to what’s actually going on,” she said. “We as the public don’t really know what’s happening except when information is leaked out.

“The commissioners should make a public statement that they are not going to continue with developing these regulations,” Carluccio said. “To say that they are continuing to develop them was really an effort on their part to address the public comments. They did that in a minimal way without really saying what’s going on, without shedding any more light on what’s going on within the commission.”

At the meeting, a capacity audience of about 250 people gave a series of two-minute speeches calling on the commission to place a permanent ban on unconventional natural gas development in the basin, and to reject PennEast Pipeline Co.’s controversial plan for a natural gas pipeline from Luzerne County, Pa. to Mercer County, NJ.