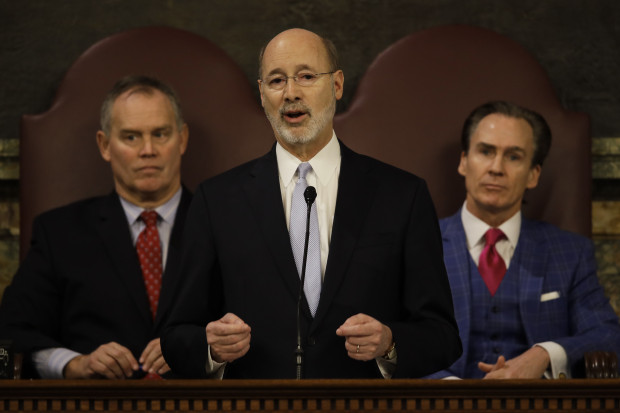 Gov. Tom Wolf delivers his budget address for the 2017-18 fiscal year to a joint session of the Pennsylvania House and Senate in Harrisburg, Pa., Tuesday, Feb. 7, 2017. Speaker of the House of Representatives, Rep. Mike Turzai, R-Allegheny, is at left, and Lt. Gov. Michael Stack, is at right.

Governor Tom Wolf is renewing his call for a severance tax on Pennsylvania’s natural gas industry. It was among his central campaign pledges three years ago, but so far he’s been unsuccessful getting it through the Republican-led legislature.

In his annual budget address Tuesday, Wolf didn’t mention the tax at all– instead focusing on efforts to streamline government.

“By identifying specific programs that could be working more efficiently – and others that are no longer working at all – this budget proposes reforms that, altogether, will save taxpayers more than $2 billion,” says Wolf.

The 6.5 percent tax rate is the same level he sought last year. The administration predicts it will bring in an additional $293.8 million, which would help plug a $3 billion projected budget deficit. It’s a far cry from two years ago, when Wolf projected a gas severance tax could raise $1 billion and help fund public education.

Under this year’s proposal, drillers would pay a 6.5 rate on gas production. The current impact fee would be left in place, and gas companies could get a tax credit for the amount they pay in fees.

Pennsylvania is the only major energy-producing state that doesn’t tax gas production. Instead, an impact fee is levied on each well drilled. The fees are highest in the first year of a well’s life and can range from $40,000 to $60,000. This year, amid low natural gas prices, the revenue from the fees is expected to hit a record low— bringing in around $174.6 million– a 23 percent decline since peaking in 2013.

“We understand the tough budget challenges ahead,” Spigelmyer said in a statement. “But Pennsylvania’s unique natural gas tax — called the impact fee — has already generated more than $1 billion in new revenue for communities, environmental and conservation programs and state agency budgets that oversee natural gas development.”

Republican legislative leaders repeated their past criticisms of the idea, echoing the industry’s argument that the current impact fee is in fact a tax, and that it works well.

“[The impact fee] invests in our local communities that are actually impacted by drilling,” says House Majority Leader Dave Reed (R-Indiana). “We’ve always been suspect of the numbers the budget secretary has put on a severance tax, given the state of the gas industry and market price. I think it’d take a lot of convincing for us to even believe almost $300 million for a severance tax, while still having the impact fee associate with it.”

Senate Majority Leader Jake Corman (R- Centre) notes the natural industry has reduced its investment in Pennsylvania over the years because of the market forces.

“How adding a tax on top of that will incentivize them to create more jobs and investment is beyond my comprehension,” he says. “We are not going to consider taxes on job creators.”

Wolf’s chances of getting a severance tax this year don’t look great, according to Franklin and Marshall College pollster Terry Madonna.

“The legislature is now more conservative,” he says. “There are more Republicans than in 60 years, and many of them were elected to negate any new takes hikes at all. I think the governor faces a huge uphill battle. Prospects for its passage? Dismal.”