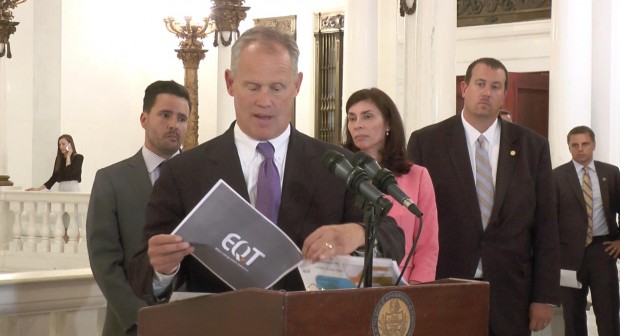 At a June 2015 press conference, GOP House Speaker Mike Turzai voiced his opposition to a severance tax while reading directly from a booklet of talking points prepared by EQT, a major drilling company near his home district in southwestern Pa. Roxburynews.com

Over the years, both Republicans and Democrats in Harrisburg have wanted to raise revenue by passing a severance tax on Marcellus Shale drillers. Polls have consistently shown a majority of Pennsylvania voters support it. Last year, the idea helped propel Democrat Tom Wolf into the governor’s mansion.

But now, as Wolf and the Republican-led legislature struggle to reach a budget deal after a nearly five-month long standoff, the severance tax is once again off the table.

The tax has been debated since the shale boom took off, so why hasn’t it happened?

There are two main reasons: lawmakers who loathe raising taxes– and lobbyists.

It was obvious over the summer, right before the July 1st budget deadline. Republican House Speaker Mike Turzai called a press conference and railed against the tax.

As Turzai stood in front of a group of reporters and TV cameras at the Capitol, there was another crowd off to his left. More than half a dozen oil and gas lobbyists watched as Turzai read directly from a booklet of talking points emblazoned with the logo of EQT—one of the biggest drillers near his home district in Southwestern Pennsylvania.

“Our elected officials know where their bread is being buttered,” says Kauffman. “Pennsylvania’s one of only 11 states that has no limits on campaign contributions. That is just completely absurd.”

Wolf made taxing the industry a key part of his gubernatorial campaign last year. He saturated the airwaves with TV ads, saying he’d use the money from drilling to fund public education.

“We’ll make the gas companies pay up to fund our schools,” Wolf said in one commercial. “It’s time to get Pennsylvania moving again.”

But these days—nearly five months into a state budget stalemate—things don’t seem to be moving anywhere. Until recently, the severance tax was a major sticking point.

Wolf has given up pushing for it this year.

He acknowledges his earlier statements, that the tax could raise a billion dollars, proved to be unrealistic.

“Yeah, I know the mathematics are very different, but I can’t tell you what’s motivating people who are against [the tax],” he told reporters Monday. “This is something the overwhelming majority of Pennsylvanians want.”

The tax debate stretches back to the beginning of the shale boom itself.

Back in 2009, when Democrats controlled the House, they passed a severance tax. But it was opposed by the Republican senate. During his last year in office, Republican Governor Tom Corbett—who opposed the idea—signaled he was open to it.  Last fall, at the state’s biggest gas industry trade conference, former Republican Governor Tom Ridge told executives he expected the tax was coming after the elections.

Over time, the arguments against the tax have changed. Sometimes, the industry is described as taking its first uncertain steps.

David Spigelmyer, who heads the industry trade group, the Marcellus Shale Coalition, has depicted it that way to state legislators.

“We are very much in the infancy and the early development of this play,” he said at a hearing earlier this year.

At other times, he’s said drillers could get up, and walk away if the tax burden is too heavy.

“It makes us uncompetitive with Ohio, Texas, and Louisiana–China. Capital can move like water in Pennsylvania. It can move from Pennsylvania pretty quickly.”

Lately lobbyists have been telling legislators that the industry is on its knees. Drillers are cutting costs, and laying people off, because the glut of gas and subsequent low prices have hurt the drillers badly.

With the state continuing to face large deficits, the need to find additional revenue grows. So, a natural gas severance tax will most likely be part of the discussion. Whether it becomes a reality remains to be seen.