Oil and gas jobs down sharply in Pennsylvania 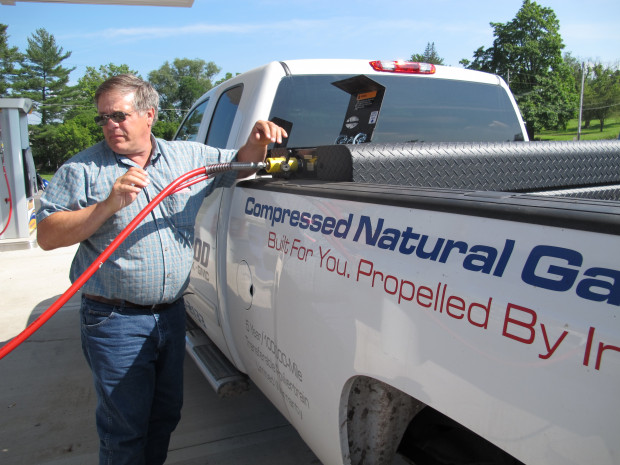 A man fills up a pickup truck that runs on compressed natural gas (CNG) at a gas station in Towanda, Bradford County.

Jobs in Pennsylvania’s oil and gas industry dropped sharply in the first quarter of 2016, compared to the same time period last year, according to new data from the state Department of Labor and Industry.
Overall, the industry shed about a third of its workforce, dropping to 20,524 jobs in 2016 compared to 30,313 the previous year. Those figures are not seasonally adjusted and reflect employment in six core areas of oil and gas operations:

As StateImpact Pennsylvania has previously reported, the Marcellus Shale industry has been going through a particularly rough patch recently amid low commodity prices.
“If there is a turnaround in the price levels, or a change in demand for natural gas, it is possible these trends could reverse,” says James Martini an economist with the state Department of Labor.
Despite the recent decline, there are currently about twice as many oil and gas workers in Pennsylvania as there were in 2008, when the Marcellus Shale drilling boom was just taking off. Martini adds it’s important to remember the industry represents a small fraction of the state’s workforce of more than 6 million people.
“It is a decrease of about 10,000 jobs within [the oil and gas] sector,” he says, “While it is obviously an important number of jobs, Pennsylvania’s fortunate to have a very diverse economy.”
Last year the state Department of Labor changed the way it presented jobs data related to the Marcellus Shale industry, amid criticism its broader economic impact was being exaggerated.
The department now uses an economic modeling software program called IMPLAN (Impact Analysis for Planning) to calculate the indirect jobs effects of the gas industry. In its most recent estimate, the agency counts 54,547 people in Pennsylvania employed either in natural gas extraction, by suppliers to the industry, or at companies that provide goods and services to the industry’s employees.