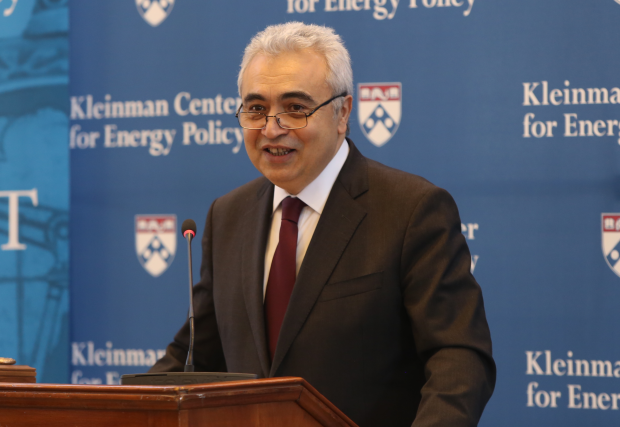 The head of the International Energy Agency said Thursday that Pennsylvania will be among the states that will continue to benefit from strong global demand for natural gas. He also said renewable fuels will see big increases in coming years as countries try to cut their carbon emissions to hit the goals of the Paris agreement.
Fatih Birol said natural gas from major reserves like the Marcellus Shale will meet an increasing share of world energy demand regardless of the policy decisions taken by world governments. The rosy outlook is driven by the low gas price that is undercutting coal, and the environmental risks associated with coal.
“Given the economics natural gas can provide for the energy system, whatever policy we have, natural gas always comes out one of the big winners,” Birol said in an interview with StateImpact during a visit to the University of Pennsylvania.
Birol, based in Paris, was in Philadelphia to receive the Carnot Prize for distinguished contributions to energy policy from the University of Pennsylvania’s Kleinman Center for Energy Policy.
His remarks follow the Wednesday release of the IEA’s annual World Energy Outlook, which projects higher demand for natural gas and renewable fuels over the next 25 years, but says carbon emissions are not falling fast enough to meet the goals of the Paris agreement on climate change that aims to keep the global temperature rise below 2 degrees Celsius.
Asked whether the Paris agreement would survive if the incoming U.S. President Donald Trump follows through on a campaign promise to withdraw from the Paris agreement, Birol declined to speculate until Trump’s policies are known.
“If a country, especially a country which has a strong share in the global energy markets and significant responsibility in terms of emissions, changes its policy, it will have implications,” he said. “It is in my view too early to speculate what the policies might be.”
But Birol said the IEA would have to change its forecasts if the U.S. does pull out of the Paris accord, in the same way that it would if any other country changed its energy policy.
“We will look at the implications of those policies for investment, for energy security, for climate change,” he said. “The story is renewables as champion for the next 25 years.”
While the Paris agreement was an important step toward cutting carbon emissions, its success will depend on the ability of governments to implement the agreement.
“Policies will determine where we go from here,” he said. “There is huge room for renewables to grow but there are not the policies there.”
The Paris agreement is at its heart an agreement on energy use, he said, noting that more than two-thirds of the emissions causing climate change come from the energy sector. National emissions cuts pledged in the Paris agreement will limit the rise in global temperatures to an average of 2.7 degrees Celsius which would miss the goal of 2 degrees above pre-industrial levels by 2100, Birol said.
Hitting the 2-degree goal would require, among other things, the share of renewable fuels in the total energy mix to almost double from 37 percent by 2040 under current projections to 60 percent, he said.
While analysts look for signs that world demand for oil has peaked, Birol argued that demand is still rising. But he said the transportation sector is getting more efficient, and predicted that the world’s private car fleet will use less oil by 2040 than it currently does, even though its total size will surge to some 2 billion vehicles.
Within the transportation sector, growth in oil demand will come mainly from trucks and jets, he said.