Congressional candidates weigh in on pipeline 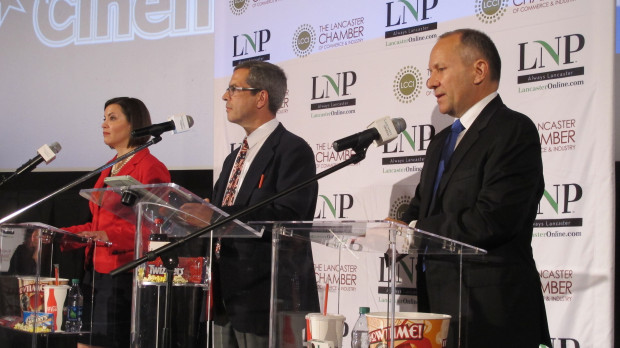 The expansion of natural gas pipelines has been a hot topic in Pennsylvania over the past few years, and not surprisingly, it’s surfaced as an issue on the campaign trail.
At a debate in Lancaster County Monday night, the three candidates vying for the 16th Congressional District were asked about their views on the proposed Atlantic Sunrise pipeline— a large transmission line designed to connect gas production in northeastern Pennsylvania to markets in the southern U.S. and to an export terminal.
Shawn House, a businessman running as a Libertarian, says he’s against the project because it could lead to private property being seized through the use of eminent domain. The company behind the project, Williams, has said that is a last resort.
“I have real problems with companies colluding with government and then saying, ‘We’re going to taking your land whether you like it or not,” says House. “I think we have to look at a lot of other options.”
Christina Hartman, a nonprofit consultant running on the Democratic ticket, says she supports a diversified energy portfolio, but isn’t backing the pipeline, citing the same reason.
“I agree with Mr. House at this time,” says Hartman. “The way things are being handled, particularly with regard to eminent domain. I’m against it.”
State Senator Lloyd Smucker (R- Lancaster) was the lone supporter of the pipeline, although he dodged directly answering the question several times. He pointed out it is the Federal Energy Regulatory Commission (FERC), not Congress, that will decide the fate of the project.
“If the process has been followed, if landowners have been adequately compensated, then I would support that project,” says Smucker.
Retiring congressman Joe Pitts (R) who held the 16th district seat for two decades irked some by refusing to take a position on the pipeline.
The district covers much of Lancaster County and parts of Berks and Chester counties. If approved, the Atlantic Sunrise would go through portions of 10 counties. The most vocal opposition to the project has come from groups in Lancaster. A decision is expected from FERC early next year.

Energy pops up as a surprise topic in Sunday's presidential debate