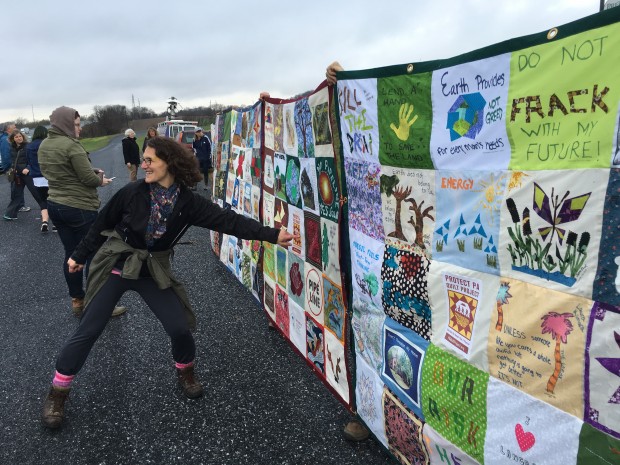 Anti-pipeline activist Malinda Clatterbuck points to one of the quilt panels.

Lancaster County is well known for its hand made quilts. It’s also becoming known as one of the most vocal places of opposition for the Atlantic Sunrise natural gas pipeline project.
Activists held a rally Monday to show off their latest act of protest— a 50-foot-long quilt, which represents the width of the permanent right-of-way for the pipeline. They held it up in front of a preserved farm in western Lancaster County, along a proposed path of the project.
“Our family has preserved these farms,” says Dwight Forry, who’s family has owned the land for 160 years. “We did not preserve them for any other purpose other than agriculture. If the pipeline’s constructed, that could hurt the yield as well as the environment.” 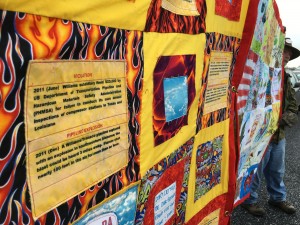 A section of the quilt lists Williams' violations.

The Atlantic Sunrise project is spearheaded by Oklahoma-based pipeline company, Williams. It would move Marcellus Shale gas from Susquehanna County in northeastern Pennsylvania as far south as Alabama. If approved by federal regulators, the pipeline would cut through portions of 10 central Pennsylvania counties and carry the gas to markets along the eastern seaboard, including the Cove Point liquefied natural gas export terminal on the Chesapeake Bay.
The quilt panels are filled with phrases like “Keep it clean” and “Do not frack with my future.” There is a large section dedicated exclusively to Williams’ various violations, set against fabric decorated with images of flames.
“We understand there are people in the community with concerns about the project, and we’ve been working to address those concerns as best we can” says Williams spokesman Chris Stockton. “At the end of the day, this project is about helping Pennsylvania and the energy industry that is so prevalent in Pennsylvania today.”
Federal regulators are expected to make a decision on the project by late 2016 or early 2017.