Energy pops up as a surprise topic in Sunday's presidential debate 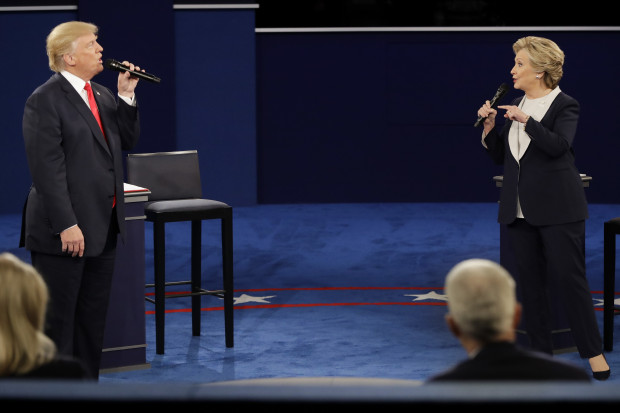 Questions over the country’s energy future surfaced in the Presidential debate Sunday night. It was a surprising five minutes of policy discussion in a tense debate that focused on character attacks.
Undecided voter Ken Bone, who found unexpected popularity on social media and later said the debate felt like watching his parents fight, posed this question:
“What steps will your energy policy take to meet our energy needs, while at the same time remaining environmentally friendly, and minimizing job loss for fossil [fuel] power plant workers?”

This really is the perfect question for anyone running for office right now – how do we combat climate change, maintain clean air, keep the lights burning, and not fire people who have no college education, and few prospects for good paying jobs. According to the Bureau of Labor Statistics, coal miners make an average fifty-thousand dollars a year. Compare that to trying to get a comparable job in the wind or solar industry. Although the BLS doesn’t track earnings for those jobs, it does track manufacturing in general. And the average wage for someone making semi-conductors for solar installations is about thirty-two thousand dollars a year.
Republican nominee Donald Trump responded first, saying energy is “under siege” from the Environmental Protection Agency. Much of what Trump passed off as facts don’t really hold up to scrutiny.
“The EPA, the Environmental Protection Agency is killing these energy companies and foreign companies are now coming in and buying so many of our plants and re-jiggering the plants so they can take care of their oil,” Trump said.
We’re not sure what the Republican nominee meant when he talked about “re-jiggering the plants so they can take care of their oil.” But it’s clear that Trump supports fossil fuels. There’s nothing in his energy policy proposal to boost renewables.
As for the EPA killing energy companies, if he’s talking about coal, economics plays as much, if not more, of a part than environmental regulation. One of the largest drivers for utilities to switch their plants from coal to natural gas is money, natural gas is so much cheaper right now. That’s simple supply and demand, natural gas drillers have boosted production in the last several years, driving down the price.
“There is a thing called clean coal,” he said. “Coal will last for a thousand years in this country.”
Yes, there is a thing called clean coal – it involves technology used to capture the carbon dioxide that results from burning coal, and then burying it underground. So far, no one has figured out how to make it economical.
And U.S. coal won’t last for a thousand years at our current rate of consumption and ability to mine it. The Energy Information Administration projects the U.S. has about 250 years worth of coal.
As we have reported here at StateImpact, coal companies are declaring bankruptcies while power plants switch to natural gas. Coal production has dropped by 36 percent since President Obama took office. And although Obama’s Clean Power Plan would force even more coal plants to shut down, economics has had more to do with coal’s recent decline than environmental regulations.
Coal just can’t compete with cheaper natural gas. Trump wants to ramp up both coal and natural gas, but it’s not clear there’s a demand for increased production from domestic power plants.
“I will bring our energy companies back, they will be able to compete, they will pay off our national debt, they’ll pay off our tremendous budget deficits.”
It’s unclear how increased coal, oil and gas production, even from federal lands, will be able to make a dent in the country’s $19 trillion dollar debt.
“The EPA is so restrictive that they are putting our energy companies out of business. And all you have to do go to….places like Pennsylvania and you see what they’re doing to miners and others in the energy business. It’s a disgrace.”
Oil and gas producers in places like Pennsylvania saw enormous success during the Obama administration. A recent slow-down in production is a result of the typical boom and bust cycles in the oil and gas business. The companies produced so much natural gas in Pennsylvania that prices dropped to record lows, forcing slow-downs in drilling and lay-offs.
Democratic nominee Hillary Clinton’s energy policy is a stark contrast to Trump. She wants to increase solar energy production by 700 percent in four years, and unlike Trump, she’s wants to tackle climate change. Despite her plans to revitalize coal country through other industries, she’s unpopular with coal miners who are backing Trump in large numbers.
Her debate comments about using natural gas as a bridge fuel to more renewables also raised the hackles of environmentalists who say all fossil fuels should now be left in the ground in order to stave off global warming. During the debate Clinton’s comments did not raise any red flags for fact-checkers, except this one:
“We are now for the first time energy independent,” she said.
That’s not true. The U.S. may have become less energy dependent than in years past, but it continues to import more oil than it exports, primarily from Canada, but also Saudi Arabia, Venezuala, Mexico, and Columbia.