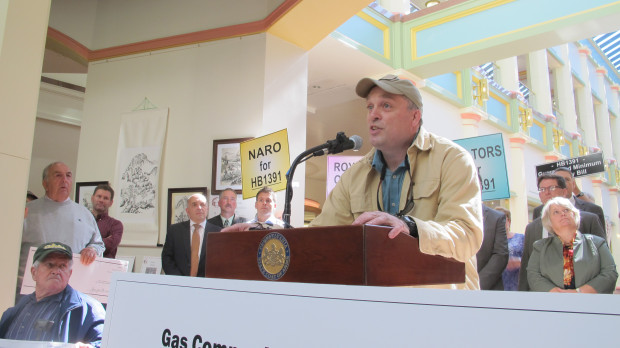 Joe Moore of Wyalusing, spoke on behalf of his mother, who he says is being cheated out of gas royalty money, "I'd like to think there is such a thing as right and wrong," he says. "This is wrong. It's criminal."

Anger over gas royalties has reached a fever pitch in Pennsylvania, as the House considers a bill aimed at protecting landowners accusing drilling companies of predatory payment practices.
About 150 royalty advocates rallied at the State Capitol Tuesday, accusing lawmakers of turning a deaf ear to their concerns, and allowing themselves to be manipulated by industry lobbyists.
“I’m here today for my mom,” says Joe Moore, of Bradford County. “She’s a 75-year-old widow, and what the gas companies are doing to her is very, very wrong. It’s criminal. Those pumps are taking gas from her land 24/7, and at the end of the month, she gets nothing.”
Following years of complaints, the House is scheduled to consider HB 1391, which is aimed at ensuring landowners are paid the legal 12.5 minimum royalty rate.
Depending on the language of a lease contract, drillers and landowners may share post-production costs. These are expenses incurred when gas is processed and transported to market through pipelines. But people allege some companies charge exorbitant, and possibly fraudulent post-production costs, leaving them with little to no royalty money in some instances.
“People are being taken advantage of,” says state Attorney General candidate Sen. John Rafferty (R- Berks). “This violates everything in this building we stand for.”
The gas industry strongly opposes the measure, arguing it would unconstitutionally change the terms of existing lease contracts. More than 20 amendments have been tacked onto the bill, which include efforts to weaken pending environmental regulations for drilling.
George Stark of Cabot Oil and Gas was among the industry lobbyists working the halls of the Capitol. While there have been many complaints about the royalty practices of some drillers, Stark says his company pays people fairly, and these issues should be worked out in court, through pending lawsuits— not new legislation.
“I don’t think the entire industry needs to be painted with the same brush,” he says. “It’s frustrating on my end to have a regional issue become a statewide issue.”
Rep. Garth Everett (R- Lycoming) is the prime sponsor of HB 1391. He says he’s secured a commitment from GOP House leaders to caucus the bill Tuesday afternoon. Governor Tom Wolf is supportive of the measure and met with some of the landowners following the rally.
Update: Everett says the royalties bill will not be considered Wednesday because the governor was addressing a joint legislative session on the opioid crisis.
“I am hoping to get a commitment for it to be top of the list when we come back in October,” Everett wrote in an email.
The House will be back in session October 17th, with 8 scheduled voting days left in its calendar.
For more background on the royalties fight, read more coverage here, and listen to StateImpact Pennsylvania’s latest radio story: