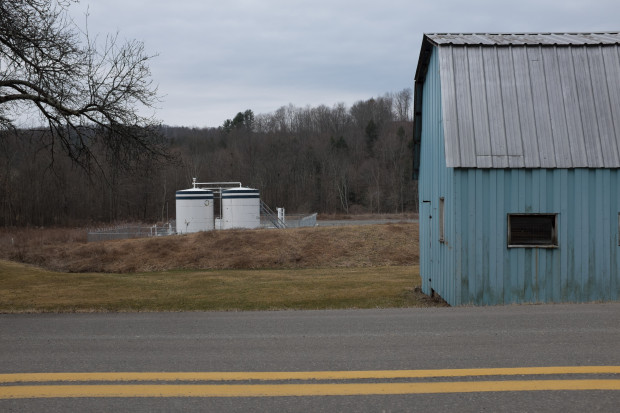 When the Marcellus Shale gas boom was taking off, Bradford County welcomed it with open arms. With more than 1,000 active wells, this region in north-central Pennsylvania became one of the most heavily drilled places in the state.
But the enthusiasm turned to anger, and many people now allege they’re being cheated out of royalty money by drilling companies.
“We’ve had enough,” says Bradford County Commissioner Doug McLinko (R). “This has been going on for years.”
McLinko says he remains a big supporter of the shale gas. He’s feeling pretty awkward as the county prepares a public relations campaign against the state’s main gas trade group, the Marcellus Shale Coalition, which he accuses of blocking legislative attempts to address the problem.
“We feel their lobbying efforts have cost our county probably $100 million.” says McLinko.
The commissioners are planning to vote Thursday to hire a PR firm. McLinko declined to say how much they’re planning to spend or who they may hire. They intend to create a short video documentary and buy local and national media ads.
“It’s just such an unfortunate set of circumstances,” says McLinko. “To have such a blessing under our feet, yet have the abuse of one company.”
He’s referring to Chesapeake Energy, an Oklahoma City-based company that’s a member of the Marcells Shale Coalition. Chesapeake drilled most of its Pennsylvania wells in Bradford County and was once the biggest operator in the state. Amid financial woes, it’s faced mounting legal problems, including lawsuits over royalty payments. A spokesman for the company declined to comment.
McLinko’s beef with the Marcellus Shale Coalition has gotten personal. At a public meeting last month he called its president, Dave Spigelmyer, a former Chesapeake executive, a “reverse Robinhood.”
“He’s taking from the poor and giving to the rich,” McLinko said.
Spigelmyer and the Marcellus Shale Coalition declined to comment.
Over the years some members of the state House who represent the region have sought to address the royalty issue, but the bills were met with opposition from the gas industry, and Republican leaders have never allowed them to come up for a vote.
“These people need to come up here,” says McLinko, referring to legislative leaders. “Instead of staying in Harrisburg and listening to the Marcellus Shale Coalition.”
The most recent royalties bill was approved by a House committee in June. House GOP spokesman Steve Miskin says lawmakers are still trying to reach a consensus about it.
“There are still concerns among many members because leases are binding contracts, which we are constitutionally prohibited from impairing,” Miskin writes in an email. “This issue becomes extremely complicated for any legislative solution. I am also a bit surprised [Bradford County is] suggesting the use of taxpayer dollars to fund a PR campaign to lobby the legislature.”
McLinko says the county plans to follow the law, citing a section of the county code, which provides an exemption from the competitive bidding process for “professional expertise.”
Bradford county’s move comes on the heels of a resolution passed Tuesday by Wilmot Township which seeks to halt gas production due to the royalty issues.