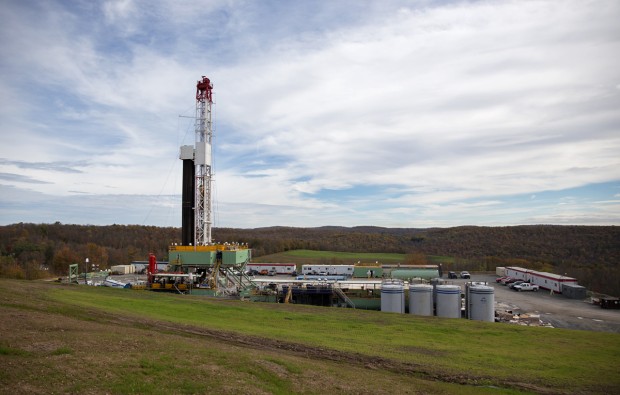 Residents in one of the most drilled-on parts of Pennsylvania want to block companies from producing natural gas, citing anger over royalty payments.
The supervisors in Wilmot Township, Bradford County plan to pass a resolution Tuesday demanding, “production be discontinued from wells where landowners are having their royalty checks diminished to nothing or nearly nothing.” Wilmot supervisor Mark Dietz is particularly worried about some residents’ threats to engage in violence or possibly tamper with gas infrastructure to disrupt production.
“People are getting really angry,” says Dietz.
The rural township is about 50 miles northwest of Scranton and is home to about 70 producing gas wells, according to state records.
A 1979 state law requires oil and gas companies to give mineral owners at least a 12.5 percent royalty. Depending on the language of a lease contract, drillers and landowners may share post-production costs. These are expenses incurred when gas is transported to market through pipelines. For years people have complained some companies charge exorbitant, and possibly fraudulent, post-production costs, which leave landowners with little to no royalty money.
Deitz says Wilmot Township is having problems with both the companies operating there: Oklahoma City-based Chesapeake Energy and Dallas, Texas-based Chief Oil and Gas. Neither company would comment on the resolution. Chesapeake referred questions to the Marcellus Shale Coalition, an industry trade group.
“A lease is a contract between a mineral owner and an energy producer,” says coalition spokeswoman Erica Clayton Wright.  “Any disputes that may arise between these two parties over the terms of the contact have and will always be most effectively resolved by the courts.”
The resolution is aimed at getting the attention of state legislators, rather than having the legal force to halt production, says Deitz. But the township is also considering seeking a court injunction to block the gas from being removed.
“It’s not that we’re against the gas companies. They’ve done a lot for our area,” says Deitz. “But we’ve got to stop the thievery. What’s the sense of letting them take a natural resource that can never be replaced for basically nothing?”
Over the years some members of the state House who represent the region have sought to address the royalty problems, but their bills were often met with opposition from the gas industry and Republican leaders have never allowed them to come up for a vote.