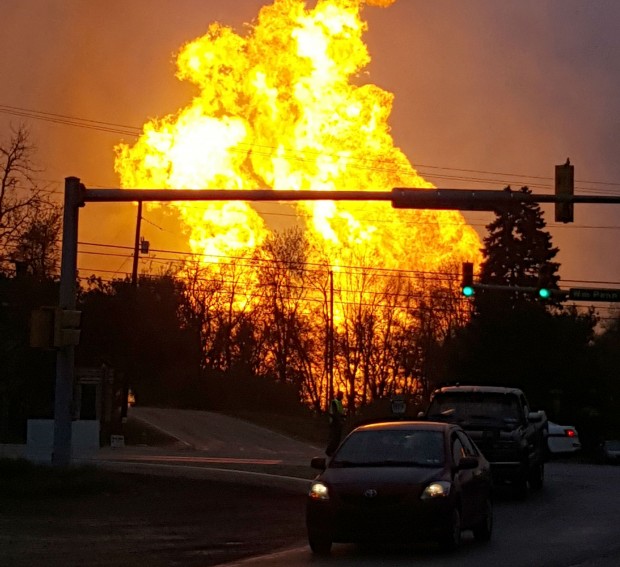 The April 29 explosion, which burned one person, caused flames to shoot above nearby treetops in the largely rural Salem Township, about 30 miles east of Pittsburgh, and prompted authorities to evacuate homes and businesses nearby.

Federal regulators are requiring a natural gas pipeline company to conduct more testing and take corrective actions on three nearby lines, following an April 29 explosion in Westmoreland County that sent a man to the hospital with severe burns.
In May the Pipeline and Hazardous Materials Safety Administration (PHMSA) found evidence of corrosion on the 30-inch gas pipeline, indicating a potential flaw in the coating material used in weld joints at the time of construction in 1981.
In the July 19 order, PHMSA now says three nearby lines buried underground “could potentially have been damaged or adversely affected by the explosion …  and pose a serious risk to life, property, or the environment if returned to normal operation” unless Spectra Energy Corporation conducts more testing and takes further corrective actions.
Creighton Welch, a spokesman for Spectra, says the company is fully supportive of PHMSA’s ongoing investigation.
“We have begun or completed many of the action items [in the order],” he writes in an email. “We expect the root cause analysis will likely be complete by late summer or early fall.”
The explosion occurred about 30 miles east of Pittsburgh on part of the Texas Eastern interstate transmission system, which runs 9,096 miles carrying natural gas from the Gulf Coast to the northeastern U.S.
The blast created a 12 foot deep, 1500 square foot hole and scorched 40 acres. A  24.5 foot section of 30-inch diameter pipe landed 100 feet away. Twenty-six year old James Baker was taken to the hospital with third degree burns over 75 percent of his body.