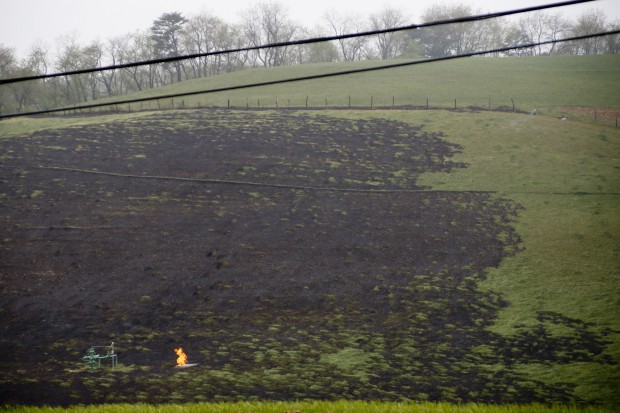 A flame flickers near a protrusion of pipes at the area where a natural gas explosion at a pipeline complex burned one person and damaged houses on Friday, April 29, 2016, in Salem Township, Pa. The explosion caused flames to shoot above nearby treetops in the largely rural area, about 30 miles east of Pittsburgh, and prompted authorities to evacuate businesses nearby.

A 15-mile long section of Spectra Energy’s Texas Eastern Transmission line, which exploded last week in Salem Township, Westmoreland County, will remain shut down until the company takes a number of corrective actions. Federal regulators issued a corrective action order to the company on Wednesday.

The Pipeline Hazardous Materials Safety Administration (PHMSA), a division of the U.S. Department of Transportation, says the cause of the explosion is unknown and an investigation is continuing.

But the order also says the preliminary investigation shows evidence of corrosion on the pipeline, which “indicates a possible flaw in the coating material” used in weld joints at the time of construction in 1981. A statement by Spectra Energy says the pipe will be examined by an independent metallurgist.

“The preliminary investigation has identified evidence of corrosion along two of the circumferential welds: one at the point of failure and another excavated after PHMSA’s response to the Failure Site,” PHMSA said. “The pattern of corrosion indicates a possible flaw in the coating material applied to girth weld joints following construction welding procedures in the field at that time.”

The company says the 2012 inspection “revealed no areas requiring repair or remediation before the next inspection.”

PA One Call, the organization that coordinates the state’s “call before you dig” pipeline safety rules reported seismic activities in the area within the past year, all east of route 819 towards Delmont, PA.

One Call executive director Bill Kiger says he has passed on the information to Spectra Energy, which included details that contractors drilled 3-inch diameter holes 30 feet deep and indicated the charges would not be set off less than “375 feet from a structure.”

A spokesman for Spectra Energy could not comment on whether the seismic activity could have been related to the explosion.

Pipeline workers at the Delmont compressor station first heard the explosion at 8:13 AM Friday, and began shutting down the line, according to the order issued by PHMSA. Spectra workers reported the explosion about an hour later to the National Response Center. The incident occurred in a right-of-way that includes four pipelines, one of which was out of service at the time. All four lines remain shut down as part of the order.

The explosion blew a 12 foot deep, 1500 square foot hole and scorched 40 acres. A  24.5 foot section of 30-inch diameter pipe landed 100 feet away. Twenty-six year old James Baker is in the hospital with third degree burns over 75 percent of his body. PHMSA says an unknown amount of natural gas was released into the atmosphere. The agency also says a nearby waterway, Beaver Run Creek, was not impacted by the explosion. 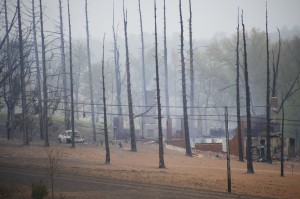 A burned out house is surrounded by charred ground and trees following a natural gas explosion at a pipeline complex on Friday, April 29, 2016, in Salem Township, Pa. The explosion caused flames to shoot above nearby treetops in the largely rural area, about 30 miles east of Pittsburgh, and prompted authorities to evacuate businesses nearby.

The lines carry natural gas from Delmont, Pennsylvania to Lambertville, New Jersey, and are part of the 9096 mile Texas Eastern system that ships natural gas from the Gulf Coast to the Northeast. Line 27, the section that exploded in Westmoreland County, was inspected in 2005 and 2012.

PHMSA’s corrective action order, written by the agency’s acting associate administrator for pipeline safety Alan Mayberry, seems to raise questions about the integrity of the pipeline’s inspections. The agency has ordered Spectra Energy to produce chain of custody documents on the pipeline and do detailed evaluations of its response plans and inspections. PHMSA is also requiring Spectra produce invoices related to all the required corrective actions.

Thomas Miller, a first responder and national expert on hazardous material handling and pipeline safety, says PHMSA’s corrective action order for the Texas Eastern line is “pretty serious” compared to what he’s seen in the past.

“As a first responder, when operators are held accountable we think it makes the entire industry better,” said Miller. “It’s gotta be a partnership, everyone has to be working together.”

Miller says the PHMSA order requires the company to do monthly reporting, instead of the typical quarterly reports.