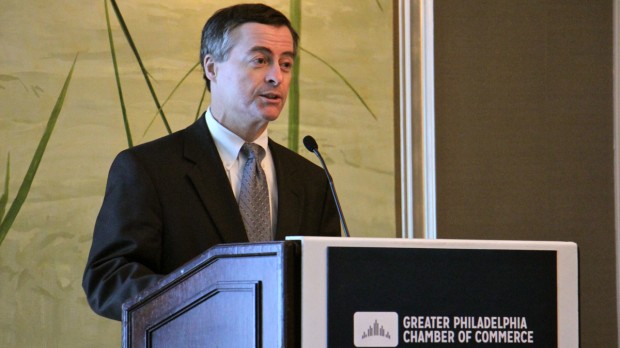 Former DEP Secretary John Quigley was hired by the Kleinman Center for Energy Policy at the University of Pennsylvania.

A month after his controversial departure from the state Department of Environmental Protection, former Secretary John Quigley has landed a new job as a Senior Fellow at the Kleinman Center for Energy Policy at the University of Pennsylvania’s School of Design.
“It’s exciting. I am very happy to be at Kleinman,” Quigley tells StateImpact Pennsylvania. “There are a lot of really talented, smart people.”
Quigley left DEP in May, following controversy over a profanity-tinged email he sent to environmental groups, criticizing them for not doing enough to support tougher environmental regulations for the oil and gas industry.
He declined to discuss his departure from state government, and says he’s still working out the specifics of his new role at Kleinman. Currently, he’s scheduled to give a public lecture in the fall and teach a course next spring.
“I’ll be working on carbon management, all things Clean Power Plan, alternative energy, and energy policy broadly,” says Quigley. “I’m interested in exploring the connection between good energy policy and the protection of public health.”
In a press release, the school says Quigley will also write blog posts and policy digests to frame energy policy issues for regional and national audiences.
“PennDesign has a long tradition of bringing together the worlds of research and practice around matters of crucial public interest, especially those centered on the environment and natural resources,” Frederick Steiner, PhD, incoming Dean and Paley Professor at PennDesign said in a statement. “In the tradition of Ian McHarg, the Kleinman Center extends that leadership role with the exciting appointment of Secretary Quigley.”