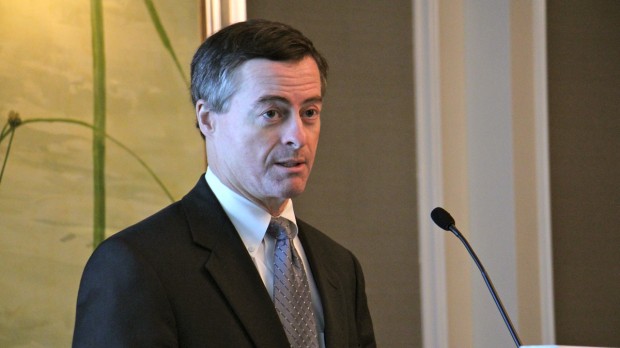 Former Pennsylvania DEP Secretary John Quigley resigned last week following controversy over an email he sent to environmental advocacy groups, criticizing them for not pushing back against legislative efforts to stall or block environmental regulations.

StateImpact Pennsylvania has obtained a copy of the email sent by Governor Tom Wolf’s environmental secretary, John Quigley, that led to his resignation Friday.
“I’ve slept on this but can no longer hold back,” Quigley wrote. “Where the f*ck were you people yesterday? The House and Senate hold Russian show trials on vital environmental issues and there’s no pushback at all from the environmental community? Nobody bothering to insert themselves in the news cycle?”
Quigley sent the profanity-laced note to several environmental groups the day after state House and Senate panels voted to reject oil and gas regulations, which he had championed in his job at the helm of the state Department of Environmental Protection. The same day, a Senate committee had also approved a bill to give lawmakers more oversight in efforts to curb greenhouse gas emissions.
Joe Minott, executive director of the Clean Air Counsel, was among the people who received the message. He calls Quigley a “good guy” who always put the priorities of the administration first.
“It would be absurd if his departure was the result of this email. I assume there were other things happening,” says Minott. “The only question for me is– does this mean a change in [the Wolf administration’s] priorities?”
A source close to the administration tells StateImpact Pennsylvania the email was merely the “straw that broke the camel’s back” and that Quigley’s style had angered people within the administration and the legislature.
“I know a number of members have complained about [Quigley’s] attitude,” says GOP House spokesman Steve Miskin. “Obviously his regulatory positions had supporters, but in the end the governor wants to get something everyone can agree to. The governor wants a consensus.”
Wolf’s chief of staff, Mary Isenhour, personally dislikes Quigley, according to Rep. Greg Vitali (D- Delaware), who is a vocal supporter of green causes.
“Isenhour has never been a fan of Quigley and she has never prioritized the environment,” says Vitali. “Wolf is getting bad advice from others in the administration. [In the email] Quigley was urging interest groups to hold up the governor’s agenda. You shouldn’t be neutral about your own policies.”
Wolf spokesman Jeff Sheridan says he’s not aware of any bad blood between Isenhour and Quigley.
“I don’t know anything about any relationship between Mary and the former Secretary,” says Sheridan. “We thanked him for his service. Given everything bubbling up, he decided to resign.”
Vitali says environmentalists are out-numbered in Harrisburg.
“Just look at any environmental committee meeting and it’s chock full of well-heeled, well-dressed men and women who represent the Marcellus Shale industry,” he said.
Vitali is worried that the lack of a strong environmental advocate leading DEP will mean the administration back-tracking on key issues. He’s specifically concerned that the updated oil and gas regulations will no longer apply to conventional drillers, who have long-complained they were unfairly lumped in with the newer, Marcellus Shale industry. He says conventional drilling regulations will be used as a bargaining chip in broader, ongoing state budget negotiations with the Republican-led legislature.
Sheridan says that’s not the case.
Stephanie Catarino Wissman, who heads the Pennsylvania division of the industry group, the American Petroleum Institute, declined to comment on what Quigley was like to work with saying only, “We will continue to work with the administration.”
News of the email first surfaced Thursday. Several articles linked it to attack ads run by environmental groups that surfaced against Democratic senators who voted against Quigley’s wishes. However, in the email he does not mention anyone by name.
Quigley instead poses a series of questions to the environmental groups, urging them to act.
“Is there no penalty for D apostasy, at least, or shaming of the gas-shilling Rs?” Quigley asks, referring to the political party labels. “The environmental community is without influence in Harrisburg. What will you do about it?”
Quigley did not respond to a request to comment Monday.