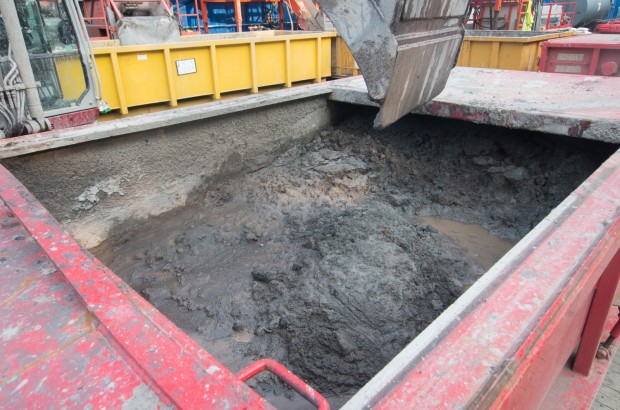 Drill cuttings are the waste dirt and rock that come up from deep underground when drilling wells. Over the past few years, DEP has allowed a handful of companies to reuse the waste as construction fill.

State environmental regulators say they won’t renew a set of controversial research and development permits that allows gas drilling waste to be reused on construction sites.
Proponents say it’s a way to recycle the waste and keep it out of landfills. Critics argue the permits have been used to avoid regulations.
In 2014 Pennsylvania’s Marcellus Shale industry generated more than 2 million tons of waste, known as drill cuttings. It comes from deep underground and can contain naturally occurring radiation, heavy metals, and industrial chemicals. Most of it goes to landfills. However, under these permits, tens of thousands of tons have been placed on already-polluted former industrial sites known as brownfields.
“It’s taking a place that’s bad and making it worse,” says attorney Jordan Yeager, who has represented the environmental group Delaware Riverkeeper in two lawsuits over the matter.
Three companies currently have the permits: driller Range Resources, waste handling company Clean Earth, and a Palmerton industrial site, NJ Zinc LLC. All of them expire March 1, 2017 and will not be renewed.
“They’re misusing a permit that was designed for research and development,” says Yeager, who is currently challenging the NJ Zinc permit. “They’re simply using it for a massive industrial site.”
Delaware Riverkeeper also challenged a Range Resources project that used drill cuttings to build a wellpad in western Pennsylvania. Range touts it as a best management practice and spokesman Matt Pitzarella says the company was pleased with the results.
“The cuttings performed as designed and provided excellent structural stability,” Pitzarella wrote in an email. “However, given the slowdown in industry activity we really couldn’t move forward with additional demonstrations.”

“A science project”
Richard Parrish is president of Impact Environmental Consulting, a New York firm that filed for the NJ Zinc permit. Last summer DEP gave approval for 240,000 tons of drill cuttings to be placed on the site annually. It’s intended to be used as a cap on the property, which is the home of a former zinc smelting plant.
The site had already received more than 45,000 tons of drill cuttings from Clean Earth, which processed them by mixing in cement as a drying agent. The developer behind the project hopes to use the property for warehousing or industrial buildings.
“It’s not something suitable for building a factory on,” Parrish says of Clean Earth’s product. “We needed better-performing materials. That’s why we stopped accepting it.”
The NJ Zinc site hasn’t received any drill cuttings since it cut ties with Clean Earth, due to the overall slowdown in drilling. Parrish also believes the R&D permit has been misused by others.
“People are not using the permit for what it was made for,” he says. “We are genuinely looking to do a science project. I could literally put a college kid in charge of running this for his thesis.”
Parrish says he may file for an extension if he can’t make use of his permit before it expires next year. Clean Earth did not respond to requests to comment.
Lack of transparency
Last year Clean Earth wanted to use nearly 400,000 tons of drill cuttings to expand the runway at the Wellsboro Johnston airport in Tioga County. The site is next to a tributary of the Pine Creek Gorge– one of Pennsylvania’s most pristine waterways. The project sparked a major backlash from locals who raised environmental concerns, and the company later backed out.
Since 2011 Clean Earth has put more than 172,000 tons of drill cuttings on four brownfields around the state: NJ Zinc, Canal Road in Fairless Hills, the former Knight Celotex site in Sunbury, and Hazelton Creek Properties in Hazelton.
DEP officials disagree with the criticism that the permits have been used as a way around waste regulations.
“It’s not an avoidance,” says Ken Reisinger, who heads the department’s Waste, Air, Radiation, and Remediation office. “DEP has always encouraged industries to come up with ways to beneficially reuse waste rather than dispose of it.”
The department requires monitoring and testing of the drill cuttings. Over the past five years, Reisinger says DEP has not seen any “red flags,” aside from one radiation alarm at Clean Earth’s Williamsport facility several years ago.
But he says the permits were not issued in the most transparent way.
“There is a public process, but it’s not very descriptive and it doesn’t really tell the public much of what’s going on,” says Reisinger. “To really comment effectively, they would need to come into the office and dig through an application that is sometimes hundreds of pages thick.”
He says drill cuttings aren’t dangerous, but the department has not yet determined whether these projects are indeed beneficial.
“After we look at the final reports, then we’ll make a determination like, ‘Yeah, this is good idea. Or no, it’s not.”