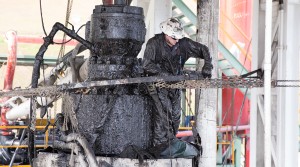 A waste disposal company has backed off its controversial plan to use 400,000 tons of natural gas drill cuttings to help expand an airport in Tioga County. The proposal would have put the waste, which includes dirt and rock displaced by shale gas well-drilling, on a steep embankment near a tributary to the Pine Creek Gorge, a pristine watershed also known as the “Grand Canyon of Pennsylvania.”

The Department of Environmental Protection says the Montgomery County company, Clean Earth, did not respond to the agency’s questions on a number of issues with the permit application, which the DEP calls “technical deficiencies.” So Clean Earth decided to withdraw an erosion and sediment control permit application for the first stage of the project. StateImpact Pennsylvania first reported on the project back in July.

The DEP sent a letter to the company in February, detailing the agency’s concerns and seeking answers from Clean Earth. Drill cuttings, which can originate hundreds or thousands of feet below the surface, often contain naturally occurring radiation, heavy metals, and industrial chemicals. But instead of responding to the requested information, Clean Earth agreed to abandon the project.

In the February 24 letter, DEP Chief of the Waterways and Wetlands Program James Kuncelman outlines concerns about the company’s proposal to stockpile the waste without protecting it from the elements, which would have posed a risk to the watershed. Rain and snow falling on top of the drilling waste could have created contaminated run-off, leaching into ground water or making its way into the nearby Pine Creek Gorge. The letter, which is copied below, lists ten separate points of concern.

Thanks to an exemption in federal law, none of the waste generated by the oil and gas industry is considered hazardous, no matter the contents. Instead, it is labeled “residual.” 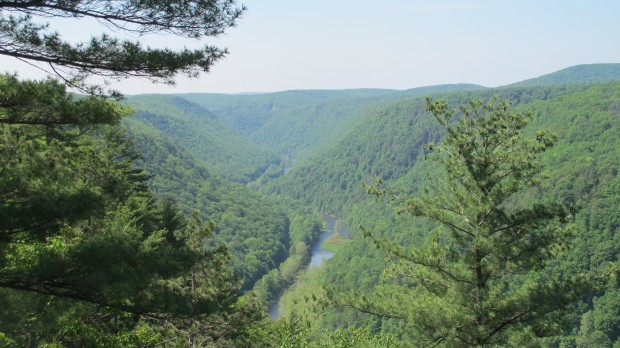 The Pine Creek Gorge in Tioga County. The gorge is often called the Grand Canyon of Pennsylvania.

Clean Earth declined multiple interview requests for StateImpact’s original story and did not respond to a request to comment for this story. But the company says in a statement it’s been handling the waste “with the highest integrity.” Clean Earth has already disposed of 172,000 tons of drilling waste in recent years thanks to a special permit from the state Department of Environmental Protection (DEP). But those sites were brown fields, and the Tioga County site had never been contaminated by industrial activity.

That kind of political opposition, along with the downturn in drilling, may have doomed the project.

“When Clean Earth started [planning] this, there was a pretty good flow of drill cuttings coming from Marcellus drill pads,” said Weaver. “It has slowed down dramatically.”

And Weaver says the company may not have anticipated the amount of community opposition.

“[Pine Creek Gorge] is one of the most intact ecosystems in the commonwealth, so when you start talking about messing around with potential polluting technology, everyone’s hackels go up,” he said.

Bryn Hammarstrom, a Tioga County resident active with the Pine Creek Headwaters Protection Group, which opposed the plan, says they’re happy the company withdrew its permit. But the group worries that when drilling returns in force, Clean Earth may try to revive the project.

“Right now they’re not doing much drilling, so they’re not getting the volume [of drill cuttings] that was here a couple of years ago,” said Hammarstrom. “Maybe it’s in the company’s interest to lay this down for a little while, hoping it will blow over.”

A spokesman for DEP says he does not expect Clean Earth to re-apply for the permit.