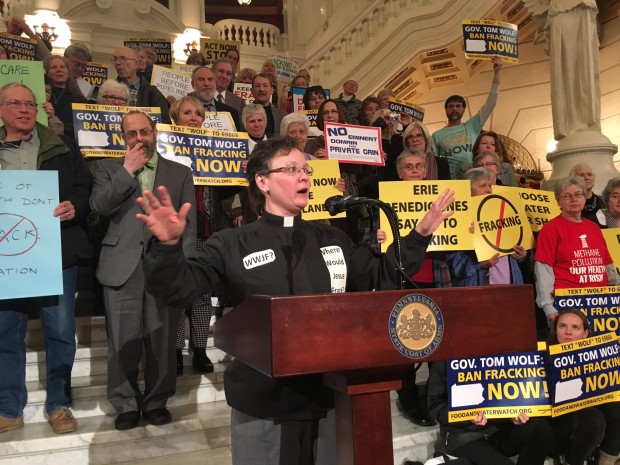 Rev. Dr. Leah Schade is with the United in Christ Lutheran Church in Lewisburg. She wore a shirt that read, "Where would Jesus frack?"

An interfaith group of religious organizations held a rally at the state Capitol Monday, calling on Governor Tom Wolf to halt natural gas development. About 50 people attended the event and asked the governor for what they called a “moral-torium” on unconventional gas development and related infrastructure, such as pipelines.
“We are calling on our legislators to listen to science and protect public health,” says Rev. Dr. Leah Schade of the United in Christ Lutheran Church in Lewisburg. “This is one area where science and religion are actually in agreement.”
She pointed to climate-damaging methane emissions and water contamination from the drilling boom.
At the same time, the House Democratic Policy Committee was meeting in another part of the Capitol to discuss whether the state should be incentivizing the use of natural gas.
“There’s a difference between whether natural gas production is good and whether it should be incentivized by the state,” says Rep. Greg Vitali (D- Delaware), who hosted the hearing.
The hearing’s panelists included members of the Wolf administration in the Department of Environmental Protection (DEP) and Department of Community and Economic Development (DCED), as well as climate scientists and representatives from environmental groups. Vitali invited UGI and the gas trade group, the Marcellus Shale Coalition to testify, but he says both declined.
Professor Don Brown of Widener University told the committee the world faces catastrophic warming if governments fail to quickly curb greenhouse gas emissions.
“Most mainstream scientists are screaming ‘We have an emergency here.’” says Brown. “The harms from Pennsylvania emissions are not simply to Pennsylvanians, they are to the rest of the world. Pennsylvania should be carbon neutral no later than 2040. That means we’ve got to substitute non-fossil fuels for all fossil fuels, including natural gas.”
Professor Robert Howarth of Cornell called gas “disastrous.”
“Yes, natural gas is a clean-burning fuel,” he told the committee. “But natural gas is overwhelmingly composed of methane, which is an incredibly potent greenhouse gas.”
Howarth sparked controversy several years ago when he published a paper which found– from a climate perspective– natural gas is worse than coal. He was criticized by fellow academics and the oil and gas industry. The Pennsylvania DEP attempted to keep his research out of its 2013 report on climate change.
Howarth told the committee he’d stepped into a hornet’s nest with the paper but that, “We did what we wanted, which was to spur additional research.”
Since then Colorado, Pennsylvania, and the U.S. Environmental Protection Agency have all taken steps to tighten methane emissions from oil and gas development.
Wolf often says he wants Pennsylvania’s gas industry to succeed. At the same time, he has ratcheted up environmental regulations for drillers and called for a new tax on production.
“DCED wants to maximize opportunities for natural gas projects,” agency spokeswoman Denise Brinley told the committee. “Pennsylvania needs to become more than a producer of natural gas. The commonwealth also needs our businesses and residents to become consumers.”
The state’s 2012 oil and gas law, known as Act 13, provides $20 million in grants for natural gas vehicle conversions, and the Alternative Fuels Incentive Grant program promotes the use of natural gas in transportation. Wolf has also proposed what’s known as a “last-mile” initiative, to connect gas pipelines to manufacturers who could make use of the fuel.