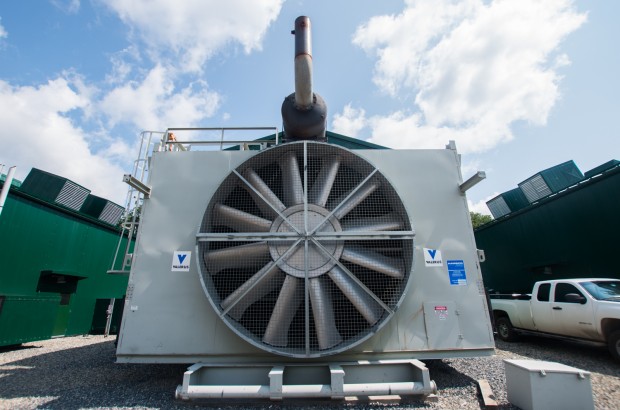 State environmental regulators want to curb climate-damaging methane leaks from natural gas infrastructure, like this compressor station, which is used to push gas from wells through pipelines.

State environmental regulators offered more details Thursday about the Wolf administration’s efforts to cut methane emissions from Pennsylvania’s oil and gas industry.
Methane is the main component of natural gas, and it’s a potent greenhouse gas that contributes to global climate change. Speaking at a meeting of the Department of Environmental Protection’s Air Quality Technical Advisory Committee, Secretary John Quigley called climate change an existential threat to the state.
“We need to take decisive action,” he said. “It is very plain that if the climate benefits of generating electricity from natural gas are to be realized, we have to minimize methane emissions.”
The DEP is creating a new general permit for unconventional (or Marcellus Shale) wellpads, which it hopes to complete this year. The agency is also drafting new regulations to curb leaks from existing sources such as compressor stations and wellpads, which Quigley expects will be finalized by the end of 2017.
The permit changes under consideration include things like a five-day timeline for companies to attempt to repair leaks after they are detected, tighter controls of volatile organic compounds, and dust reduction measures. DEP is also seeking to establish a list of best management practices for leak detection and repair along production, gathering, transmission, and distribution lines.
During the public comment period, representatives from environmental groups and concerned citizens who live near gas infrastructure praised the DEP’s efforts. Michelle Obid of Valencia, Butler County spoke on behalf of the Mars Parent Group, which has fought efforts by a gas company to place a wellpad near her children’s school.
“There is no excuse not to do everything possible to reduce the dangerous pollution from unconventional natural gas extraction,” Obid told the committee. “Please make these new methane regulations strong and meaningful.”
Aaron Jacobs-Smith is an attorney with the Clean Air Council. He also praised the methane strategy but remains concerned the new rules don’t address the older, conventional industry, nor the methane leaking from Pennsylvania’s thousands of orphaned and abandoned wells.
“It is something we’ve talked about a lot in the environmental community,” he said. “There are some studies that have looked at rates of emissions from abandoned wells and found that’s a pretty significant source of emissions. It’s definitely something we hope DEP will address.”
Krishnan Ramamurthy heads DEP’s Division of Permits. He says the agency is aware of those issues and hopes to tackle them in the future
“We are resource-constrained,” he said. “There are only so many things we can do.”
Drillers and pipeline companies have pushed back against DEP’s methane proposals. Stephanie Catarino-Wissman heads the Pennsylvania chapter of the American Petroleum Institute, a trade group representing the oil and gas industry. She believes the new rules could stifle the shale revolution.
“Onerous and unnecessary new regulations could have a chilling effect on the American energy renaissance, our economy, and our incredible progress reducing greenhouse gas emissions,” she said in a recent statement.