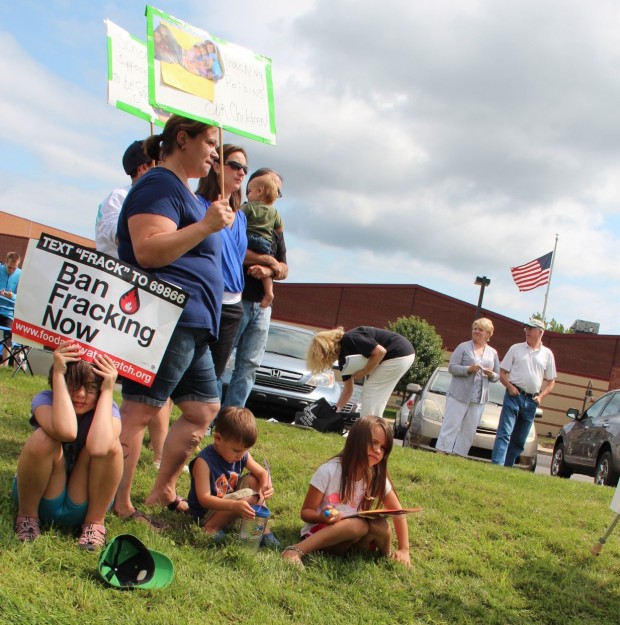 Nichole Mazurek, of Middlesex Township, at an anti-fracking protest with her three children, Samantha, 8, Ian, 3, and Alyson 6.

Environmentalists attacked a county court ruling that backs one township’s change of zoning rules to promote natural gas development, saying the decision is likely to encourage other municipalities in Pennsylvania to open up more of their land to the gas industry.

Opponents of a Middlesex Township measure to increase the amount of land that can be zoned for industrial uses such as natural gas development said that the decision by the Butler County Court of Common Pleas last week could set a precedent among some other townships that are planning similar changes.

The ruling, by Judge S. Michael Yeager, represents a setback for advocates of local control over gas drilling after the landmark Robinson Township ruling in December 2013 in which the Pennsylvania Supreme Court ruled that townships have a constitutional responsibility to establish zoning to protect the health and safety of their residents.

Some other municipalities are passing ordinances that allow gas drilling to take place in the majority of the township’s land, including areas that are zoned residential, said Maya van Rossum, who heads Delaware Riverkeeper Network, a plaintiff in the Butler County case.

“The outcome for our case should have implications for all of those other municipalities, including how they consider property rights issues, and how they must consider environmental rights in their decision-making,” van Rossum said. She said DRN will appeal the ruling. The other plaintiffs were the Clean Air Council and three residents of Middlesex Township.

Van Rossum argued that township officials paid little attention to either environmental rights or property rights and failed to consider science and expert opinion that the Delaware Riverkeeper Network and Clean Air Council presented in arguing their case.

DRN and other environmental advocates had hoped the Middlesex case would build on the Robinson ruling, which struck down parts of the wide-ranging Act 13 oil and gas law that allowed state law to pre-empt local ordinances on gas development, and gave gas companies the right to obtain waivers of state rules designed to keep wells and rigs a certain distance from natural water sources.

Industry advocates welcomed the latest ruling and said it would allow the resumption of operations at the Geyer well pad where gas-development plans have sparked local opposition because the site is less than a mile from a school.

“We are pleased with the outcome of this process and look forward to recommencing operations at the well site in the near future,” said Patrick Creighton, a spokesman for Rex Energy, the operator. “Rex Energy remains steadfast in our commitment to maintain an open dialogue with the Mars Area School Board and local stakeholders as we restart operations at this well site.”

In his ruling, Judge Yeager rejected the plaintiffs’ arguments that the Township’s change to its zoning under Ordinance 127 in August 2014, increasing the amount of township land available for gas drilling, was unconstitutional.

“The suggestion that a zoning ordinance is unconstitutional and/or does not protect the health, safety and welfare of the people because it is not restrictive enough is contrary to the concepts and principles of zoning,” the judge wrote in a 20-page opinion issued on Nov. 19.

Judge Yeager firmly sided with the Middlesex Township Board of Supervisors and its Zoning Hearing Board, saying that they “clearly and thoroughly” balanced the considerations of various zoned districts and found they were consistent with the township’s comprehensive plan to allow gas drilling in seven of the districts, including those zoned as residential/agricultural.

He said the plaintiffs failed to show that the ordinance in question does not promote the health, safety and welfare of the people, as required under the Environmental Rights Amendment of the state constitution.

The judge also rejected as “disingenuous” the plaintiffs’ argument that the Robinson decision has determined that unconventional natural gas drilling was a heavily industrial use.

If a landowner is unhappy with the lack of regulation over a neighboring property, that concern should be addressed at the ballot box rather than through changes to zoning, the judge said.

“This court has found no basis to upset the Zoning Hearing Board’s findings with respect to the compatibility of natural gas drilling in the residential-agricultural districts of Middlesex Township,” the judge wrote.

Joseph Minott, executive director of the Clean Air Council, said the Middlesex ordinance conflicts with the Robinson ruling that neither the state nor local authorities can allow gas drilling everywhere.

“Zoning powers cannot be used to industrialize a township,” Minott said in a statement. “The Middlesex Township ordinance tries to do on a township level what Act 13 failed to do statewide. It would be illogical to allow townships to perform an end-run around constitutional protections by industrializing Pennsylvania township by township.”

Middlesex resident David Denk, one of the plaintiffs, declined to comment on the judge’s ruling.