In a Wednesday press conference, Republican Sen. Adam Pugh — who also chairs the Education Committee — unveiled his plan for education reform during the upcoming legislative session. 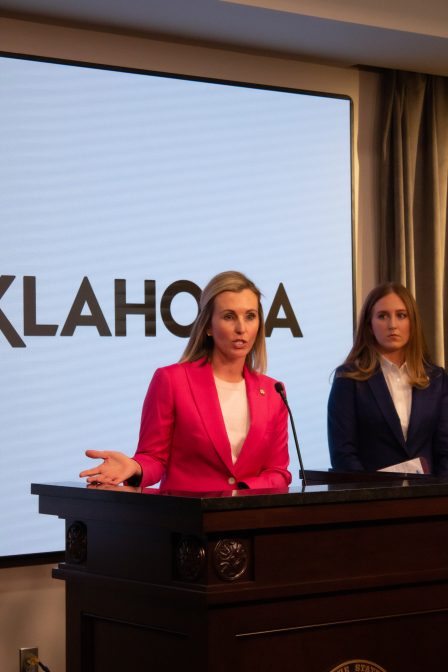 Sen. Kristen Thompson speaks at a January press conference about the upcoming legislative session’s educational priorities. Thompson said she learned just the day before that teachers don’t get maternity leave.

Notably absent from the priorities list is any mention of school vouchers — an issue persistently championed by Secretary of Education and newly elected State Superintendent Ryan Walters, as well as Governor Kevin Stitt. Last session’s voucher bill was narrowly defeated.

Pugh said the priority list was crafted after he spent the summer in conversations with stakeholders.

“I met with over 200 public school superintendents. I met with every college president in the state of Oklahoma. I met with hundreds, if not thousands, of teachers and parents and advocacy groups,” Pugh said. “And the goal there was just to listen and take notes and hear their concerns, and find areas where we can work together to advance education and outcomes for our kids and for the state of Oklahoma.”

SB529: would create a scholarship program similar to the state’s Inspired to Teach program, but this program (dubbed Oklahoma Teacher Corps) would provide full scholarships — as opposed to Inspired to Teach’s cap of $25,500 — and would require teachers to work at least four years in an Oklahoma Title I school.

SB522: would change the state’s teacher mentoring program so that any teacher, regardless of how long they’ve been certified, would be eligible to be a mentor to teachers during their first year. The existing $500-per-year stipend for mentoring would not be affected. This differs from a similar bill that would pay $2,000 per year to highly qualified master teachers to mentor new teachers for their first three years in the classroom.

SB361: would create a coalition of member states that recognize certification reciprocity by out-of-state teachers.

SB364: would mandate 12 weeks of paid maternity leave for public school teachers who have worked at least one year at their district.

SB525: would reimburse teachers who obtained an additional teaching certification at the request of their district for the cost of the certification exam.

For schools and students

SB523: would add $50 million to the Oklahoma School Security Grant Program. Public or private schools would be able to use the funds for salaries of school security officers, conducting threat assessments and implementing modifications, updating security technology and building security and developing emergency response plans with local law enforcement and emergency medical providers.

SB531: would remove the attendance metric from the state’s A-F report card and replace it with “climate surveys” administered to students, staff, and parents and guardians of students. Districts could also be rewarded for reporting progress in certain metrics with $500 or $1,500 per graduate, depending on the economic status of the graduate.

SB527: would increase the funding weights for several areas, including special education and gifted/talented students.

SB359: would add $60 million to the funding formula for education by moving ad valorem dollars to account for previous year actuals and not projected amounts. This comes on the heels of ad valorem protests last year that left rural schools in a lurch.

For the college prep path:

For the work ready path:

For the core curriculum path:

Funding request: would update the State Department of Education’s accounting system by $11 million and would provide all districts the technology to update to a common Student Information System.