Arshad Lasi is the 23-year-old CEO of The Nirvana Group.

It started with a smoke shop.

It’s now a multi-level, vertically integrated company making a name for itself in the brave new frontier of Oklahoma’s cannabis industry.

Arshad Lasi is the 23-year-old CEO of The Nirvana Group, a cannabis company that employs about 150 people and features five dispensaries, two distribution facilities, three manufacturing facilities and a farm with 7,000 square feet of cultivation.

Lasi, a marketing and management senior at the University of Houston, was interning for a private equity firm when his father, who owned and ran a smoke shop, got a cold email about getting into Michigan’s cannabis industry. The Michigan opportunity fell through, but about a month later, the Lasis started hearing about SQ 788 — the state question that would legalize medical cannabis in Oklahoma. Once the question was passed, the Lasis went all in.

“I’m like, at first, it’s Oklahoma. It’s not going to happen. They’re not going to get enough signatures,” Lasi said. “The next month, 788 passed, and we were astonished. And we immediately started applying for licenses. And here we are, three and a half years later.” 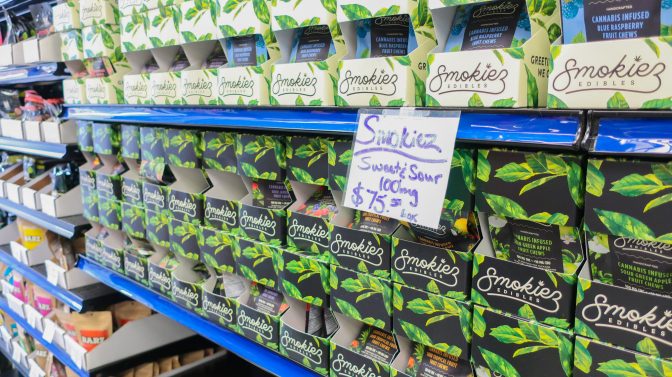 A variety of cannabis products line the shelves from floor to ceiling. The Lasis run the state’s only cash-and-carry warehouse.

The Lasis, like many cannabis business owners in Oklahoma, have navigated the murky waters of Oklahoma’s early medical marijuana days. While the Lasis have found success, unprecedented low barriers to entry have saturated the industry, creating a “wild west of weed” where some sink and some swim.

StateImpact and KOSU asked listeners how the cannabis industry is affecting their communities. Over 150 people responded in voicemails, texts, emails and social media posts to the callout for insights. One of the major themes that emerged was a focus on economic impact.

The economic impact of Oklahoma’s blossoming industry reaches far beyond cannabis business owners — from packaging and banking partners to storefront landlords and thousands of employees. But as for state and local revenue from cannabis taxes, officials hesitate to characterize the industry as a silver bullet to the state’s economic woes.

The Lasi family started with one dispensary that quickly became three. Arshad Lasi juggled going to school full time in another state with helping his father manage the shops, the first of which opened in January 2019. Lasi went to class Monday through Wednesday, took an evening flight to Tulsa, and helped his father open and close their dispensaries for the rest of the week.

“In the beginning, it was pretty rough,” Lasi said. “Sunday, I would fly out back to Houston. Monday, wake up, go to school… did that for about nine months,” Lasi said. “It sucked, but it was necessary. We had to do it.”

Lasi said a silver lining of the pandemic was being able to stay in Tulsa and take his classes remotely online. He hopes to graduate at the end of the summer.

After finding a rhythm with running their dispensaries, the Lasis began expanding their company and consolidating their supply chain. They launched their own brands of cannabis products, including edibles, pre-rolls and vape cartridges. They bought land, put down some greenhouses and a lab, and got to work cultivating and developing new products. 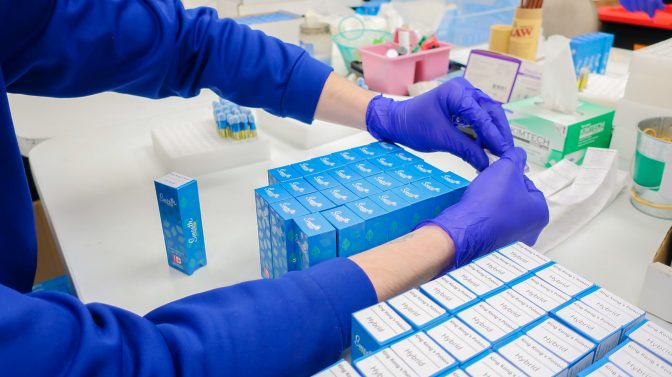 The Nirvana Group runs the state’s only cash-and-carry wholesaler, which allows dispensary owners to shop Costco-style for cannabis products to sell in their shops.

The Lasis aren’t the only ones benefiting from the company’s success. The Nirvana Group contracts with several partners: Philips RX makes disposable canisters, Greenlane does packaging and waste disposal, Distru manages the software for distribution and the point of sale system, LeafLink offers a business-to-business connection platform, and Regent Bank handles their financials.

Lasi said The Nirvana Group employs 150 employees, about 95% of whom are full time. He said the company is structured to encourage upward mobility.

According to a 2020 estimate in the Leafly Jobs Report, Oklahoma had over 16,000 full time equivalent employees in the cannabis industry — more than the number of construction workers in the state. 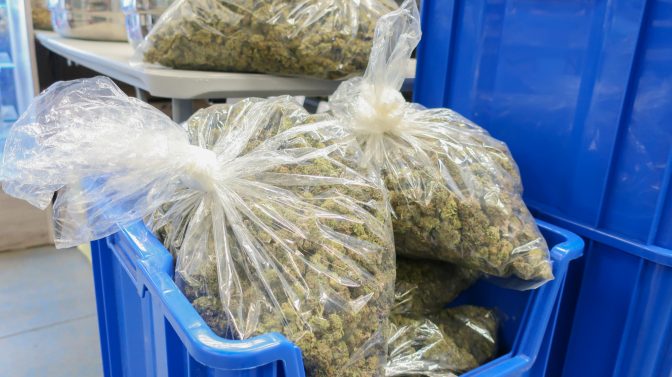 Bags of cannabis sit in crates at The Nirvana Group’s Tulsa-based warehouse.

‘They deserve an opportunity to be part of the industry.’

With business licenses costing $2,500 — compared to neighboring Arkansas with a $100,000 license fee and $500,000 performance bond — Oklahoma’s low barriers to entry have allowed thousands to flood the market, with about 13,000 business licenses issued since 2018. In a state with roughly 10% of its population being medical cardholders, the so-called Oklahoma “Green Rush” makes for big business opportunities.

Oklahoma has another policy that makes cannabis entrepreneurship more accessible: less limits. In states like Colorado, recreational cannabis is prohibited from being sold in localities that outlaw it. Arkansas allows only 40 dispensaries to operate in the entire state. But in the nearly four years since legalization, Oklahoma has doubled the number of Colorado’s recreational and medical dispensaries combined.

But not everyone sees Oklahoma’s accessible market as a positive. The state has had its share of black market marijuana busts. This legislative session, lawmakers are bolstering Oklahoma’s licensure process with more fees.

House Bill 2179 by Rep. Scott Fetgatter, R-Okmulgee, would require indoor and greenhouse-style commercial growers to pay the initial $2,500 as a base, then an additional $1.50 per square foot for canopies over 1,667 feet. Another bill, Senate Bill 1697 by Kingfisher Republican Sen. Darcy Jech, would require commercial growers to acquire at least a $25,000 bond for the purpose of land reclamation. A full list of current bills as of publication time can be viewed here.

For would-be business owners without much up-front capital, Oklahoma has provided a relatively easy way to break into the weed business. But critics of the proposed legislation argue efforts to raise the barriers to entry may disproportionately impact non-white business owners.

A 2017 Marijuana Business Daily survey found less than 10% of business owners are Black or Latino. Other states have tried to address this issue by creating equity laws, which are geared toward encouraging people from disadvantaged backgrounds to start businesses in the industry. In practice, results have been mixed.

California’s 2018 Cannabis Equity Act sought to provide financial and technical assistance to business owners from economically disadvantaged communities, or from communities that had been disproportionately impacted by the War on Drugs. The program has been widely criticized for its low overall impact, chiefly due to the fact localities can choose whether to participate in the program.

To qualify for the equity program in Denver, Colorado, at least 51% of a business must be owned by someone who can prove at least one of the following: the would-be owner or their family was arrested on cannabis-related offenses, they earn under 50 percent of the state’s median income or if they’re from a designated low-economic opportunity zone.

Critics of this program say existing retailers are using the arrest criteria to apply for social equity licenses, leading to 80% of the state’s social equity retail dispensary licenses to be issued to big names in the industry: Kind Love, Yuma Way and Star Buds.

“I think there’s a lot of people who have the right, and they deserve an opportunity to be part of the industry,” Lasi said. “And they shouldn’t be restricted because the license is so expensive that it’s just not feasible.”

The economic impact of the state’s burgeoning cannabis industry doesn’t just benefit the businesses themselves or their partners, but the state and local governments are also seeing a boost from tax revenue. Medical cannabis is one of the state’s few revenue-raisers of the last 30 years due to the passage of SQ640, which raised the threshold to pass revenue legislation. Whether the money will have a significant effect, though, is up for debate.

How are cannabis taxes collected, and where do they go?

Local and state officials are careful not to refer to cannabis revenue as a cure-all for the state’s budget. Though Oklahoma’s cannabis industry generated nearly $150 million in revenue last year — for context, Oklahoma’s 2022 budget was $8.8 billion — lawmakers like Rep. Scott Fetgatter say cannabis revenue is “not saving the state.”

“I had a gentleman at an event I spoke at a few weeks ago, he said, ‘marijuana is bringing in more money than oil and gas.’ And it’s just not even close, you know?” Fetgatter said. “I think it’s important for people to understand that there is an impact, but at the state level, it’s not [a] needle-moving impact. … While we’re appreciative of those tens of millions, hundreds of millions of dollars, in the grand scheme of [a] nearly nine billion dollar budget, they get that looted pretty quickly.”

Fetgatter said the revenue has helped benefit school districts through the Redbud Fund — over $38 million was allocated to it last year — but it adds up to about one percent of the total common education budget.

At the local level, officials also aren’t seeing a radical change in budget numbers that can be attributable to cannabis tax collection. Anthony Francisco is the Finance Director for the City of Norman — which usually generates the third-highest monthly revenue numbers in the state according to the Oklahoma Tax Commission — and he said the revenue increase from cannabis sales, while notable, is just one relatively small revenue source.

“To the extent that there has been an increase in general revenues, I would not attribute that solely to medical marijuana,” Francisco said. “The dispensaries combined make up a very small source of our overall general revenue funds.”

Despite the limited local impact, respondents to a statewide call for opinions on Oklahoma’s cannabis industry are hopeful about what it can do for their communities.

Below are three audio clips from listeners, voicing their views on how the medical cannabis industry is economically impacting their communities.

As for Lasi, he said he’s grateful to have gotten so far in Oklahoma’s cannabis industry, and he’s looking forward to making his business bigger and better.

“We came from a background where we didn’t have a million dollar fund to play with, and we didn’t know cannabis before we started here,” Lasi said. “And it’s changed our lives, and it can change other peoples’ lives too.”

StateImpact’s Beth Wallis and KOSU’s Kateleigh Mills produced this story as part of the America Amplified initiative using community engagement to inform and strengthen local, regional and national journalism. America Amplified is a public media initiative funded by the Corporation for Public Broadcasting.

Kateleigh Mills contributed to this report.