A herd of bison lounge around a dirt road at the Konza Prairie. Beth Wallis/StateImpact Oklahoma

‘A world of wounds’: Decline in grasshopper populations offers window into consequences of climate change

In a few months, the Konza Prairie will be teeming with jumping, chirping, munching grasshoppers. But more than likely, not as many as last year.

For the last two decades, the grasshoppers of the Konza Prairie Biological Station in Manhattan, Kansas, have been declining — even as their main food source, grass, has nearly doubled in abundance.

It caught the attention of Ellen Welti, who currently works as a research ecologist with the Smithsonian Institution. But while she was working on her first postdoc at OU, she led a study that measured long-term trends in grasshopper populations at the Konza Prairie. It was an undertaking that won her one of the highest honors in her field: the Cozzarelli Prize.

“[Konza Prairie] is kind of the perfect ecosystem for grasshoppers,” Welti said. “But when I looked at [the data] more in-depth, we do see this pretty striking 2%-per-year decline in grasshopper populations.” 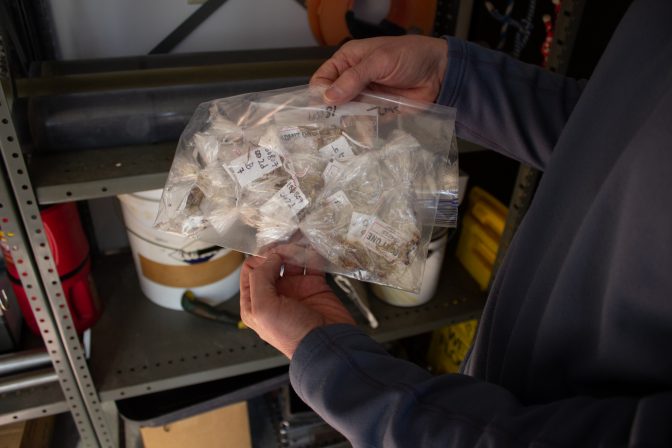 Kansas State University professor Jesse Nippert holds a bag of frozen grasshoppers collected from the Konza Prairie. He said the storing the grasshoppers allows them to be studied for years to come.

The Konza grasshoppers have declined by over 30% in the last 22 years. Welti and a team of researchers from the University of Oklahoma, the University of Illinois and Kansas State University decided to chemically analyze the grass to see what was going on with the insect’s food source. They found that even though the grassland’s biomass had nearly doubled, nutrients like nitrogen and phosphorus had been diluted by 40-90%.

The more carbon dioxide (CO2) that’s released into the air, the more the grass grows. But there is a finite amount of nutrients to go around, so each blade of grass ends up with less nutrients. The grasshoppers can only eat so much grass to meet their nutritional needs, and according to the research team, those needs are going widely unmet.

Welti said though nutrient dilution has been shown in previous studies to be associated with increased CO2, climate change may also play a role.

“It could also definitely be related to changes in climate,” Welti said. “So of course, we all know that if you water plants more, they grow bigger. And sometimes when the temperature is hotter, plants can have more growth as well. So these changes in climate are also affecting how much plants grow… in addition to increasing CO2.”

Jesse Nippert, a biology professor at Kansas State University who worked on the Welti study, explained some of the complexities that went into reading the data. He said climate drivers cause “boom and bust” years of insect populations. Changes in air temperature, as well as precipitation timing and amount, can also impact grasshopper populations. When the data was analyzed in the long-term aggregate, trends began to emerge. 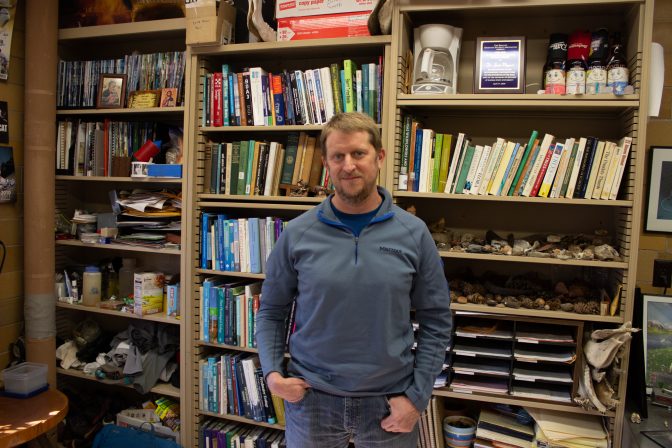 Professor Jesse Nippert stands in his office at Kansas State University. Much of Nippert’s work focuses on the Konza Prairie.

“It’s only with long-term ecological data, where you can look at responses potentially over decades, that it becomes a little bit more reliable to link changes in the population of an organism to discrete drivers like global change, nutrient dilution, climate anomalies, things like that,” Nippert said. “That’s really one of the key strengths of this paper, is this long-term data-related record that provides a little bit more strength for understanding what’s driving these responses.”

Michael Kaspari, an OU biology professor and researcher who also worked on the Welti study, said it’s one of few studies with access to long-term data. The study at Konza was unique — using decades of collected grass samples from an untreated, controlled prairie. It’s a study that, because of its utilization of long-term data, provides a more comprehensive and accurate look at what’s going on.

“One of the biggest challenges as an ecologist is to understand long-term trends,” Kaspari said. “And one of the problems with that is that it’s darn difficult for one person to organize something that they’re going to do every year for 20 years.” 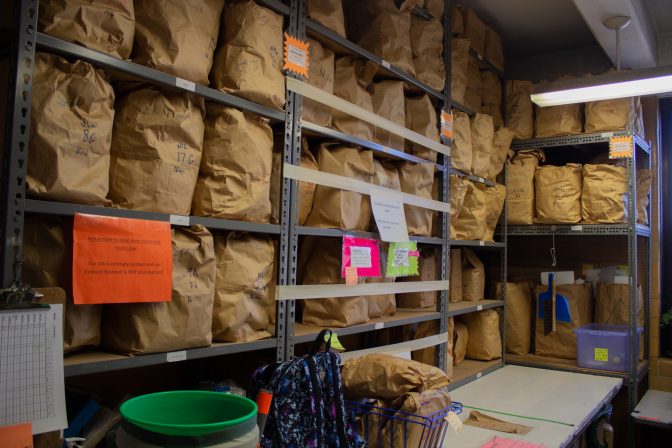 Bags full of grass gathered from the Konza Prairie line the walls in a storage room at Kansas State University. The decades of stored grasses allowed researchers access to a unique, long-term dataset.

The issue of nutrient dilution doesn’t exist only at Konza. Around the world, climate change, increased CO2 content and a concentration on agricultural yields have caused ecosystems and crops to become less nutrient dense. From the kelp forests of the coast of California to the wheat fields of England, plants around the world are becoming less nutritious.

Irakli Loladze has been raising the red flag on nutrient dilution for decades. His 2002 paper was one of the first to point to rising CO2 levels as the culprit for nutrient dilution, as well as how the issue could have detrimental effects on human nutrition, especially in developing countries.

In 2014, Loladze also published a meta-analysis of 7761 observations on the effect of CO2 on plants. The study showed a significant decrease in overall mineral concentrations, caused by an increase in carbohydrate production. In other words, when plant abundance went up, nutritional quality generally went down.

Loladze uses the term “hidden hunger” to describe the phenomenon in which people consume enough calories, but not enough nutrients. He emphasized the connection between CO2-induced depletion of minerals and human nutrition is an issue that’s far from settled in the scientific community, and more research is needed.

Loladze said the Welti study, combined with other research on declines in cattle growth due to low-quality forage, presents troubling implications.

“[The Welti study researchers] portrayed this worrying picture that herbivores, whether it’s insects or mammals, they might be affected by this continuously rising, year-over-year CO2 concentrations,” Loladze said. “I think it’s a great study.”

In addition to its effect on insects and potentially humans, nutrient dilution also has implications for more herbivores, like bison. Researchers at the Konza Prairie Biological Station track the bison living there, and they found in wet years with higher grass growth, the animals put on less weight than in drier years.

“The same ideas that we see in grasshoppers, we’ve also seen in our captive bison herd,” Nippert said. 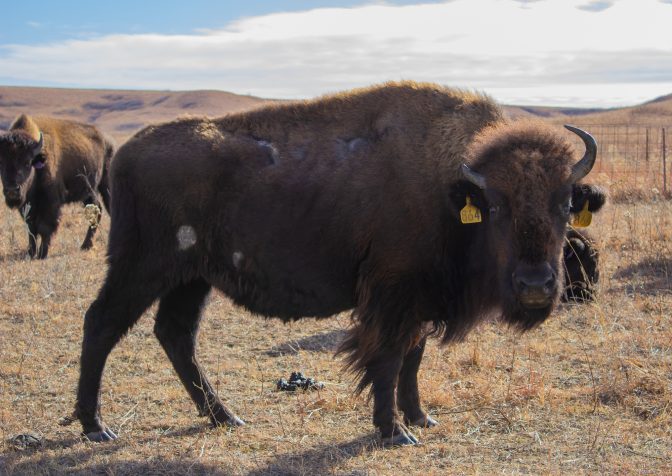 A bison stands in the grass at the Konza Prairie. Like grasshoppers, bison have also been impacted by nutrient dilution.

The idea that forage quality is declining is nothing new to ranchers, according to Oklahoma State University professor Sam Fuhlendorf. Fuhlendorf studies natural resource ecology and management, and he works with ranchers around the Great Plains. He said ranchers have been mitigating the problem with fertilizing, burning and supplemental feeding, but the costs add up.

“When fertilizers are cheap, then people can put a lot on, and you could potentially … lead to increased problems with water or something else,” Fuhlendorf said. “But when [fertilizers are] expensive, they tend to be a little more cautious, and they don’t want to put more on than they need.”

In 2021, fertilizer prices skyrocketed in part due to soaring prices for the natural gas used to produce it, as well as severe storms in the US that disrupted production. But even when fertilizer prices are low, it can come with a different kind of cost.

Fertilizer runoff is a major environmental concern, in part leading to catastrophic dead zones, such as the one at the Gulf of Mexico. Fertilizers, soil erosion, animal waste and sewage travel down the Mississippi River to the gulf, creating a nearly uninhabitable environment for marine life. Landowners are having to balance fertilizer use not only with their wallets, but also with their potential impacts on the environment.

Ultimately, Fuhlendorf said, agricultural conditions are changing, and farmers and ranchers will have to adapt.

“With landowners, I think they’re starting to recognize that thinking the world’s going to be the same as it was the last 30 years — it’s probably not a good idea,” Fuhlendorf said. “And that there’s a little bit of uncertainty in exactly where it’s going to go.”

The task of addressing climate change is daunting, and some researchers argue the world is already past the “point of no return” on reigning it in. Nippert said something people can do to get involved is participating in citizen science initiatives that help researchers get a bigger picture of what’s happening in local ecosystems. The Oklahoma Department of Wildlife and the University of Oklahoma offer these environmental citizen science programs.

Welti’s grasshopper study, while revealing, also highlights the bleak place humanity finds itself in as it reconciles a hunger for modernity and industrialism with the health of the planet. Kaspari said after the research team got the results of the study, he spent the next six months sitting with complicated emotions.

“Ecologists tend to be both pessimists — because we live in a world of wounds … [and] you see all the damage that other people don’t see — at the same time, so much of it seems to be fixable,” Kaspari said.

He said for example, if grasshoppers are declining due to pesticides, get rid of the pesticides. Science has helped fix problems with the ozone. If a prairie is being destroyed, plant more and preserve it. He said the solution to a problem like nutrient dilution, though, is something much more fundamental.

Because ecosystems are so interconnected, Kaspari said the effects of losing grasshoppers could also in part be contributing to loss for other animals that rely on grasshoppers as a major food source, such as grassland birds. Tugging on one string of an ecosystem’s web can cause ripple effects that stretch well beyond one species.

“This is the kind of existential problem that I think will eventually convince people that something like this is going on — if the chaotic weather doesn’t do it,” Kaspari said. “But it’s going to take time to get that out. And then it’s going to take time… to fix it. And I just realized, this is basically going to be the rest of my life that I’m working on trying to even get the word out.”

As the research on climate change continues, the Konza Prairie grasshopper study offers a window into this “world of wounds,” and humanity’s leading role in it.