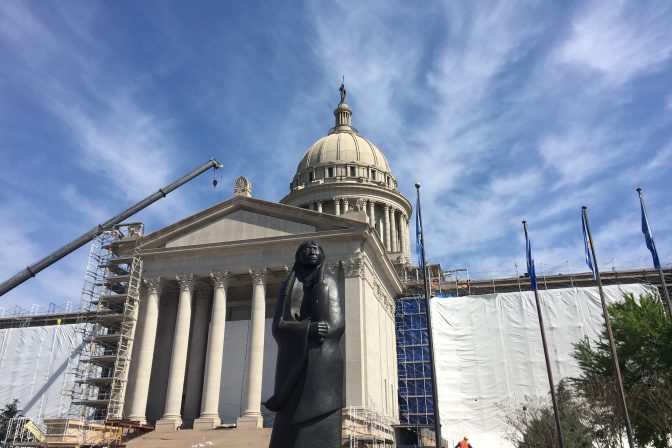 This session was far less contentious than last session in part because lawmakers were working with a budget surplus. Oklahoma teachers didn’t stage any walkouts, but education was still a dominant topic.

Most of the debate was focused on funding. Lawmakers approved a second teacher pay raise of about $1,200, which Gov. Kevin Stitt insisted on after taking office. It puts Oklahoma teachers on track to have the highest average salary compared to teachers in neighboring states.

Public schools will also receive an additional $74 million to use however they see fit, and lawmakers increased funding for higher education for the first time in over 10 years.

Republican leaders said the move will help attract business. Some Democrats, however, said the bill is merely cosmetic, because it doesn’t change the minimum number of instructional hours for students.

Before state revenue tanked in 2008, Oklahoma lawmakers eliminated the state’s school day requirement. The change followed a particularly bad winter, and it allowed schools to make up instructional time by extending school days rather than adding new ones, as long as they completed 1,080 hours. Nearly 20 percent of Oklahoma school districts have adopted the four day week in an effort to cut costs, though a 2017 study showed short weeks were costing some districts more money and savings elsewhere were negligible. Some lawmakers say short weeks have become popular with parents and teachers.

The legislation includes exemptions for schools that can prove economic and academic benefits, and it goes into effect for the 2020-2021 school year.

Additionally, lawmakers passed new regulations for online charter schools. House Bill 1395 brings them under the same accounting and conflict of interest requirements as traditional public schools. This legislation was seemingly a response to concerns about Epic Charter Schools, which is being investigated by state and federal law enforcement.

Criminal justice reform debates centered around several bills this year. Late in the session Gov. Stitt threw his weight behind several of those bills, and he added a few new proposals.

Many criminal justice reform advocates thought this would be the year Oklahoma addressed its prison population. It surpassed Louisiana in 2018 to become the state with the highest incarceration rate.

Several other bills did not receive final approval, but they could be reconsidered during a special session or during the next regular session in February, 2020.

However, legislators did approve some measures.

Many health-focused bills have also been tabled until the next legislative session.

Sen. McCortneyintroduced Senate Bill 605which failed to get a hearing before the first deadline, but some held out hope until late in the session that Medicaid expansion could be discussed this year.

Senate Bill 605 would have adopted something similar to the Arkansas expansion model using commercial health insurers to administer the program.

It’s a preferred method in Republican-dominated states. However, Governor Stitt seems to want to own this issue and has announced that he has over 100 people working with him from across the state to try to come up with a plan that will be announced this fall.

To complicate matters further, a petition is circulating that could put Medicaid expansion on the 2020 ballot. That ballot initiative may force lawmakers to do something next year. In the meantime, Oklahoma has the second highest uninsured rate in the nation and some of the worst health outcomes.

Like, other state houses the Oklahoma Legislature has also been considering abortion restrictions.

Early this session, Senate Leader Greg Treat proposed writing a trigger into statute that would make abortion in Oklahoma illegal if the US Supreme Court overturns Roe v. Wade.

Treat was criticized because some anti abortion groups didn’t think his bill went far enough. So, Treat proposed a constitutional amendment that would make it clear that nothing in Oklahoma law secures or protects the right to abortion.

Debate on that issue will likely resume next legislative session because a constitutional amendment question couldn’t go to voters until November 2020.

Kevin Stitt signed into law. It provides a framework for testing and labeling of smokable marijuana.

You may remember the heated exchange between the state’s optometrists and Walmart last fall.

They spent millions for and against a state question that would allow optometrists to set up shop in big box stores. Voters said no. But now, the two sides have come to a compromise under Senate Bill 100.