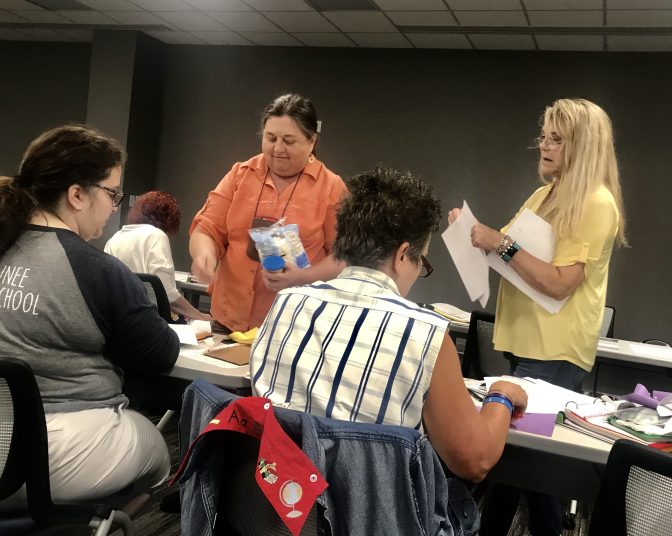 Jane Cronin (left) and Tara Barker (right) pass out materials at an OREEP workshop on June 9, 2018.

Jane Cronin and Tara Barker are retired middle school science teachers. Over the years they attended the science curriculum workshops put on by the Oklahoma Energy Resources Board, a state agency funded by oil and gas producers and royalty owners, that spends millions on K-12 science curriculum focused exclusively on fossil fuels.

StateImpact Oklahoma and The Center for Public Integrity originally reported on this energy-based science curriculum in 2017.

“Jane and I both had gone to those workshops, and we had gotten their materials, and they were really good.” Barker explained. “We were concerned about the environment, and we wanted to have something like what they have, but for renewable energy.”

With funding through The Sierra Club, one of the largest environmental groups in the country, Cronin and Barker teamed up with a local professor to develop the Oklahoma Renewable Energy Education Program, or OREEP.

The group held one of its first workshops on June 9, 2018. About a dozen teachers gathered at the Central Electric Cooperative in Stillwater testing various activities related to wind power.

Cronin and Barker offered incentives similar to OERB’s. Attendees received loads of free materials, such as mini solar panels that can be used to teach about electricity.

“Supplies are short where we’re at,” said Mallory Hudson, who teaches at Roosevelt Middle School in Oklahoma City. “So the fact that I don’t have to worry about paying for anything, the printing was already done…Even something that simple is a big deal.”

There is another advantage, too. The State Dept. of Education sets subject standards in Oklahoma, but it’s up to individual teachers, schools, and districts to find curriculum and meet them. With these free lessons from OREEP and OERB, that work is mostly done. The materials and curriculum are specifically designed to meet Oklahoma’s science standards.

OERB has been criticized for promoting fossil fuels under the guise of education. Following the workshop, Cronin was asked how she and Barker plan to walk the line between education and industry promotion.

“It’s not a question I’ve thought about. I don’t really know how to answer that,” Cronin replied. “I would refer back to whatever Sierra Club policies are. That’s what we’re going to follow.”

For the most part, Cronin and Barker appear to be following OERB’s playbook. They even created a mascot similar to OERB’s Petro Pete, a cartoon oil worker who lives in a make-believe town called Petroville, Oklahoma, and teaches kids the merits of all things oil and gas through picture books. OREEP’s mascot is described as a “tween scientist” named “Re” short for “Renewable”. Re’s robot sidekick, GEE, which stands for “Green Energy Explorer,” teaches her about renewable energy.  Soon, Cronin and Barker plan to roll out storybooks about Re and GEE’s adventures for elementary-age students. 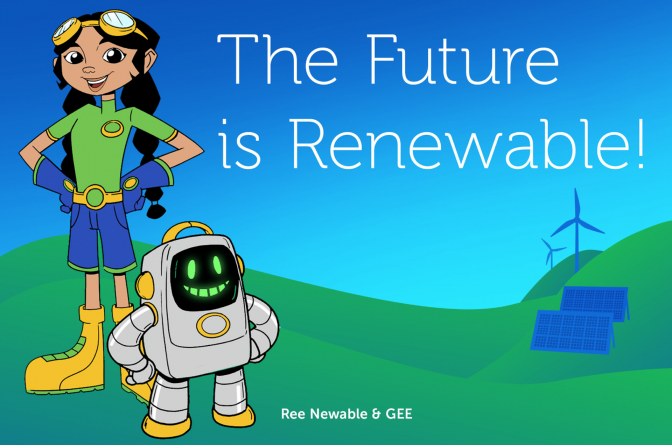 OREEP’s mascot is a “tween scientist” named “Re,” which stands for “renewable.”

“We have been very conscientious to avoid being funded by a specific industry,” Johnson said.

Johnson said OREEP will not take money directly from energy companies, though they received startup funding from the Oklahoma Renewable Energy Council, a non-profit with some industry support.

“We’re not promoting one industry over another. We’re sharing the truth about these industries,” Johnson said. “It’s simply focusing on the fact that these forms of energy are being deployed now. They’re becoming increasingly common. It’s like giving somebody both sides of an equation.”

This new renewable energy curriculum does come with some strings attached. As Cronin alluded to, the program is bound by the policies of Sierra Club, which prefers some renewables over others, focusing heavily on wind and solar, and rejects nuclear energy, a non-renewable that some argue is key to a stable, low-carbon energy supply. OREEP apparently falls within Sierra Club’s Ready For 100 campaign, which encourages cities and towns to transition to renewable energy entirely.

These selective curricula are part of what biologist and retired University of Virginia professor Paul Gross calls the “politicization” of K-12 science. Gross started writing about the trend decades ago.

“I could see that science, almost uniquely, was being impacted by a local, current politics,” Gross said.

One of the main problems, according to Gross, is teaching science through today’s affairs. Science is both deeper and broader than that.

“When you do science, you are asking about what reality is and how it works and testing your guesses,” Gross said. “I’m talking about real science, as opposed to the borderlands outside science that concern themselves with questions in which science plays a part, to be sure, but that are in fact principally questions of human behavior. In short, politics.”

In addition to teaching scientific concepts, Barker expressed a desire to influence students beyond the classroom.

“If we teach this in the schools, then the kids going forward as adults, they’re going to think, ‘Oh, this is what we should do,’” Barker said.

Their reach is small compared to OERB, which was established in 1993, but Cronin sees OREEP growing as large as its competitor someday.

“They’ve built over the years,” Cronin said. “We’re just starting, so hopefully in 20 years we’ll be like them.”

Barker and Cronin say over 100 educators attended their workshops this year, including representatives from the state’s two largest school districts, Tulsa and Oklahoma City. They estimate their materials may have reached over 10,000 kids, and now they’re seeking additional funding from Sierra Club to reach even more next year.