One year after the teacher walkout, has education taken a backseat? 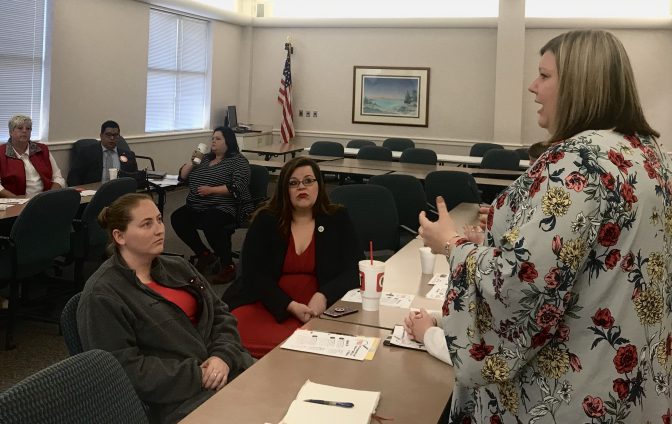 Oklahoma Education Association President Alicia Priest addressed over thirty educators gathered on March 26, 2019 before heading to the state capitol to lobby their representatives.

It has been nearly one year since the teacher walkout, when thousands of educators flooded Oklahoma’s state capitol demanding better pay and more school funding. After nine days and little progress, they turned their attention to the 2018 elections.

“We will go to the ballot boxes in June and in November. We will campaign for candidates who are friendly to public education,” said Ponca City teacher Zach Murray on the last day of the walkout. “No more will education be secondary to everything else.”

Lawmakers appropriated about $50 million more to education last year— a fraction of the $200 million demanded by the Oklahoma Education Association, the state’s largest teacher union.

That’s why teachers have returned to the capitol this year.

Putnam City teacher Nikki Craig was at the capitol nearly every day during last year’s walkout. She recently returned to talk to lawmakers about outstanding needs in classrooms.

“I feel like emphasis continues to be put on raises,” Craig said. “But a big issue on top of the raises is classroom funding.”

Craig told Democratic Sen. Julia Kirt she relies on two teaching assistants to manage her class of thirteen, but the position has high turnover due to low pay.

“A starting TA in my classroom, they bring home $948 a month,” Craig said. “And without them I could not function.”

Craig teaches the most severely disabled students at Will Rogers Elementary School. They range in age from five to twelve. Some are in wheelchairs. Others use feeding tubes. And most need to be changed multiple times a day.

“We do some academics, but we spend more time working on life skills,” Craig explained. “I have a student who has been at our school since he was three. He’s a fourth grader, and this is the first year he’s ever drank out of a cup without spilling.”

Craig is one of many teachers from across the state continuing to visit the capitol. OEA President Alicia Priest estimates forty to fifty union members have lobbied their representatives each week since the 2019 legislative session began, in hopes of swaying lawmakers to add more money to the school funding formula this year.

From Educator To Lawmaker

Dozens of educators filed to run for office in 2018. Just seventeen were elected, though education was a common campaign theme.

“Everybody wanted to talk about how education was the number one priority for our state,” remarked Democratic Sen. Carri Hicks, one of the former educators who took office this year.

But these educators-turned-lawmakers face the same underlying reality as last year’s legislature: revenue that falls short of agency budget requests.

Legislators are mulling a second teacher pay raise, in addition to the one passed just before last year’s walkout began, but there has been little discussion of boosting funding for things like supplies, support staff and teacher training.

Hicks supports another teacher pay raise and more classroom dollars, but she worries it’s become and either or scenario.

“The biggest elephant in the room has been education,” Hicks said. “I’ve been disappointed that there haven’t been talks about revenue raising measures.”

“Investing in the classroom, you know, maybe that’s going to be one of the things that we look at in the future,“ Sterling said. “You only got so many dollars to go around.”

Sterling recently retired after forty years at Tecumseh High School. When it comes to making budget decisions, he is looking to leaders in the House of Representatives for guidance.

“I’ve really been appreciative of how they’ve tried to help us,” Sterling said as he headed off to a a budget meeting for freshman lawmakers. “It is like you’re a freshman. I left school after 40 years to go back to school. So I’m literally studying my lesson.”

Thanks to continued economic growth and last year’s tax increases, the legislature has more than half a billion extra dollars to spend this year, but the education department’s request alone would eat up close to 75 percent of the surplus.

“It is our constitutional responsibility to express the needs of schools in meeting the needs of kids,” said Superintendent Joy Hofmeister.

On top of rising costs, Oklahoma’s student population has grown by over 50,000 since 2008, and Hofmeister says the needs of Oklahoma’s students have changed dramatically due to widespread poverty, incarceration and addiction.

“We now have children who have adverse childhood experiences that are profound.” Hofmeister said. “We are seeing increase in mental health issues that need support, and teachers are shouldering the brunt.”

Craig can attest to that, and it’s one of the reasons she believes schools need more money. She said she often gets pulled away from her students to address behavioral problems in other classrooms.

“We have more training in de-escalation techniques, and a lot of times the regular teachers don’t know how to do that,” Craig said.

However, education isn’t the only thing legislators have to fund this year. Other agencies have also asked for more money, and the state has existing obligations, like debt. Republican leaders are also interested in increasing state savings, something Gov. Stitt has advocated for as a way to avoid deep spending cuts during the next economic downturn.

Hicks says this is not the time to put money away.

“Time is precious and the lives of our children, and so I just have a really hard time saving for our future at the cost of now,” Hicks said.

Oklahoma law requires the legislature fund education by April 1st, but the House and Senate have yet to reach any agreement. The Oklahoma Education Association says they haven’t ruled out another teacher walkout.