Ready To Walk Out: Oklahoma Teachers Say Enough Is Enough 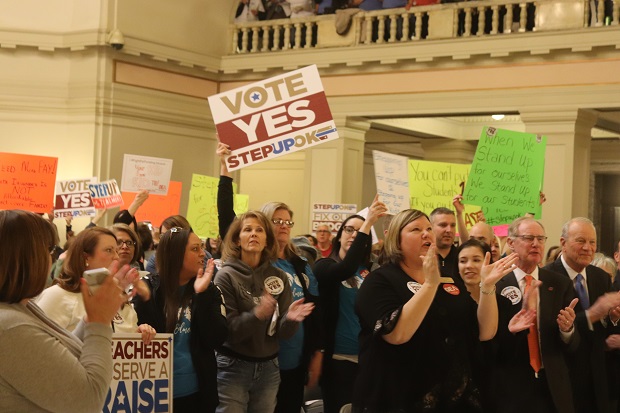 Many Oklahoma educators are fed up with state lawmakers who have promised teacher pay raises for years but have failed to actually deliver. At their wits end, these teachers are now planning to walk out of their classrooms to push legislators to act.

The Superintendent of Bartlesville Public Schools, Chuck McCauley, says the idea for the walkout started in his district in September. Staff that participated in the last Oklahoma teacher strike in 1990 proposed revisiting the tactic at a school board meeting.

“There was a lot of support for the idea, from staff, teachers, and parents,” McCauley said.

Talk of a walkout quickly faded because it looked like lawmakers had a plan to raise teacher pay. They introduced a bill to raise taxes during a special legislative session in November, but it failed.

After this second defeat, McCauley says some teachers and staff members were so angry they were ready to walk out right then. He asked them to be patient, and sent around a survey to other districts to gauge their interest in suspending schools.

“If we do this there has to be broad support,” he said.

McCauley quickly learned that the people in his own community were on board.

At a jam-packed school board meeting, teachers, students, parents and business leaders stood side-by-side and voiced their support for a teacher walkout.

“People have to let their voices be heard, they have to take to the streets, and they have to demand change,” he told the crowd.

High school senior Chloe Cunningham said the only way to stop this statewide problem “is to suspend school and show our representatives that we mean business and we want change.”

The passionate discussion in Bartlesville caught the media’s attention, which prompted similar meetings to play out in other districts and communities around the state.

A Facebook page called ‘Oklahoma Teacher Walkout – The Time Is Now’ popped up, and a week later has nearly 60,000 members.

Broken Arrow teacher Milli Reynolds is one of the Facebook page members. She says teachers have been fighting long enough for more pay, and more school funding.

At this point she thinks a walkout is the only way to force legislators to act.

West Virginia teachers even joined the Facebook conversation. Educators from the Mountain State just called off a nine-day strike over teacher pay, which pushed lawmakers there to give them the five percent raise they were fighting for.

They’ve been showing solidarity for Oklahoma teachers with comments like, “West Virginia teachers support you!” And “Stand strong!”

While all this buzz was happening, the state’s largest teachers union, the Oklahoma Education Association, was trying to organize a date for the walkout.

The union initially gave lawmakers a deadline in late April to increase teacher pay and school funding or face a statewide school shutdown. That was rejected by throngs of teachers across the state. They said it was weak. They wanted lawmakers and their union to move faster.

So, under the pressure of thousands of educators, union president Alicia Priest announced a change in plans on the OEA’s Facebook page.

“I have listened to the anger and frustrations of teachers from Atoka to Enid—Bartlesville to Altus,” she said in an online video. “Our members are ready to act now. And so we are accelerating our strategy. Today, we are putting lawmakers on notice. They must work swiftly to follow the law and pass an education budget by April 1st.”

If nothing is done, the union will call for statewide school closures beginning April 2nd.