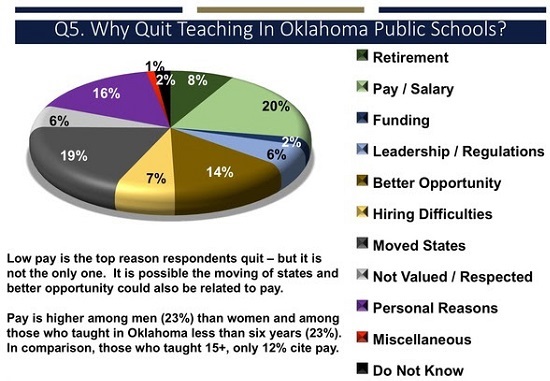 The State Department of Education surveyed thousands of former teachers about why they left the profession, and what it would take to get them back. The survey results, released Monday, suggest most quit because of low pay.

Survey Details: When asked the open-ended question, “Why did you quit teaching in Oklahoma Public Schools?” 34 percent of respondents cited pay or a better opportunity.

However, when given a multiple-choice question, 48 percent of respondents chose pay as the most important factor in their decision to quit teaching. Another 23 percent said the main reason they left was because they felt overburdened by education standards and curriculum requirements.

Nearly one-third of the former teachers said they would return to the profession if pay was increased.

State Superintendent Joy Hofmeister has asked lawmakers to raise teacher pay by $5,000 this year, in order to attract some of the people back to the classroom.

“As our state continues suffering the effects of an unprecedented teacher shortage, Oklahoma cannot afford to ignore the results of this survey,” Hofmeister said. “Pay is no cure-all to staving off this shortage, but without regionally competitive compensation, we are trying to win a home run contest with one arm held behind our back.”

About 7,500 people completed the survey, but the results focus on the 5,487 respondents under the age of 65.

Hofmeister says there are nearly 30,000 people living in Oklahoma with an active teaching certificate that do not teach.