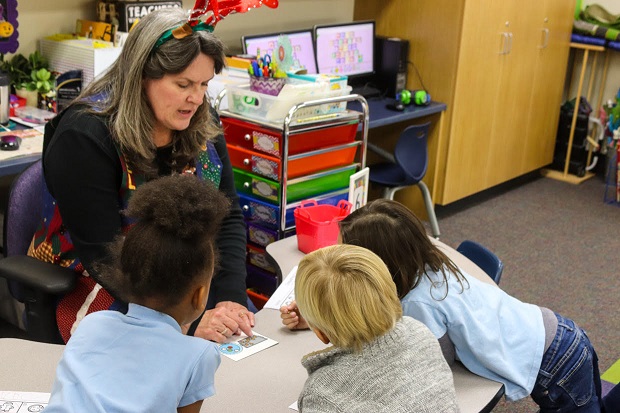 Preschool teacher, Irene Castell, works on counting with a small group of kids.

Kids are scattered around the preschool classroom at Zarrow International School in Tulsa. It’s loud and chaotic, but it’s organized. Some students paint pictures; others write out the letters of the alphabet. The small group sitting around teacher Irene Castell is learning to count and compare numbers.

Castell says many kids would not learn these skills if they stayed home, or went to daycare.

“We always hear back from teachers of kindergartners, ‘We can always tell who’s been to pre-K,’” she says.

Georgetown University Professor Bill Gormley has studied the effects of Tulsa’s preschool program for 16 years. Initially, his research focused on the short-term benefits. He found quite a few, but as his research continued, Gormley wanted to know if those benefits did, too.

In 2015, Gormley and a colleague published a paper on whether pre-K’s positive impacts lasted to the third grade — when students take their first round of state tests. The researchers didn’t have access to a lot of data, but they found that preschool’s boost on reading scores had fizzled out.

This finding led some policy analysts to question whether Oklahoma’s pre-K program was worth the $140 million annual price tag.

And for years, that’s where the debate — and the research —ended. Until now.

Gormley published a new paper in December 2017 tracking the effects of Tulsa’s preschool program into the seventh grade. This time he had a lot more data with which to work. He looked at GPAs, test scores, grade retention, enrollment in honors courses and absenteeism, among other things.

“The bottom line,” he says, “is that we have found that the positive effects of Tulsa’s early childhood education program do persist over time.”

Gormley found that students who were in pre-K perform better on standardized math exams, are more likely to enroll in honors courses and are 26 percent less likely to have been held back a grade level down the road.

He says the grade retention data is particularly important.

“Grade retention has been shown in a lot of other studies to have negative consequences for kids,” he says. “Therefore any policy intervention that reduces grade retention is worth celebrating.”

Also, apart from the higher math test scores, Gormley says kids who attended pre-K were more likely to take Algebra I early, or before the eighth grade.

“And that’s potentially a big deal because looking down the road that should mean that when these students graduate from high school… they will be more likely to have taken an advanced math course than other students,” he says.

Gormley is not sure why the reading scores didn’t stay boosted, but guesses it’s because verbal skills depend on so many outside influences, like parents and peers. Math skills, on the other hand, are impacted mostly by teachers.

Gormley says similar results are likely across the state because Oklahoma pre-K programs are strictly governed. There can’t be more than 20 kids in a class, for example, and teachers must have a bachelor’s degree and a certificate in early education.

These requirements make the program expensive, but Gormely calculates that for every $1 the state puts into preschool — it saves up to $4 in the long run.

Treat introduced legislation in 2015 that would have defunded the state’s preschool program. He says he wasn’t trying to get rid of pre-K entirely, but change it from being a mandatory, state-funded program, to one that schools could pay for using their own property taxes — if they chose.

“My hope was to shift that financial burden to the local district then shove more money in the state funding formula so we could increase our per-pupil expenditures for K-12,” he says.

Treat says he hasn’t read Gormley’s newest study entirely yet, but will. Regardless, he’s still skeptical.

“It’s a serious public policy concern,” he says. “Oklahoma has the oldest universal pre-K program, and it’s heralded around the country as a huge success. I want to make sure that we really are as successful as we say we are.”

Treat wants to see more long-term research, and he wants to know if pre-K has effects that can last through high school.

Gormley, the Georgetown professor, says that’s the next thing he plans to study.