Robert Romines is the Superintendent of Moore Public Schools. He says many administrators are very involved with classroom instruction on a day-to-day basis. 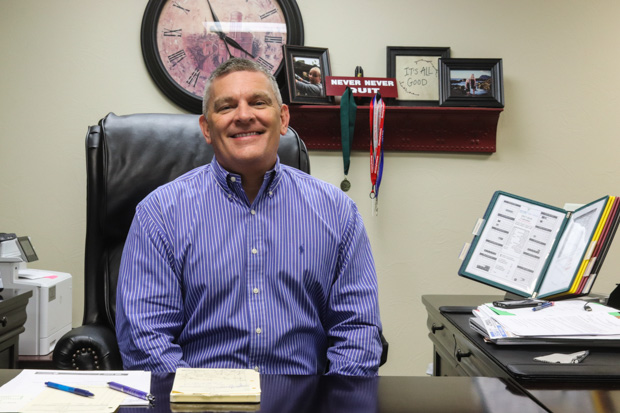 Robert Romines is the Superintendent of Moore Public Schools. He says many administrators are very involved with classroom instruction on a day-to-day basis.

The November 21 order directs school districts that don’t spend at least 60 percent of their budget on instruction to consolidate administrative staff with other districts. A strict interpretation of this rule would force most Oklahoma school districts to cut an administrator, or a support staff person, and then find a way to split that cost with a neighboring district.

Fallin’s executive order says any freed up funding should go to classroom instruction.

Moore Public Schools Superintendent Robert Romines says most education spending at local districts is tied to classroom instruction, even if it doesn’t look that way in a school’s budget.

“When people hear administrative costs they think of people like myself,” he says.

But many school employees classified as administrators often spend a majority of their day working with students, Romines says. Teacher’s assistants, for example, can be considered administrative in a school’s budget documents, even though they work in classrooms alongside teachers.

“School nurses, that’s another that falls under the administrative cap,” he said. “Counselors, elementary and secondary counselors. Media specialists is another one.”

Romines says the way employees are classified skews the picture of classroom and administrative spending. And he and other local school officials say it’s an inaccurate way of determining whether or not a position is necessary.

Fallin declined StateImpact’s request for an interview. We asked her office to clarify how it categorizes instruction and administration spending. Michael McNutt, a spokesperson, said the definitions are to-be-determined.

McNutt said the Governor wants to encourage districts to cut overhead and avoid duplicating services. The objective, he says, is to free up money for a teacher pay raise.

Shawn Hime, executive director for the Oklahoma State School Boards Association, says districts already share services to save money — and have done so for years. Also, he says years of budget cuts from lawmakers mean most schools have already eliminated every nonessential role.

“Do you really think there are inefficiencies in the schools?” he asked. “They’re having to lay-off teachers, other staff members, cutting anything they can.”

Hime says Fallin’s executive order is a political statement, a show for conservative lawmakers who refuse to raise taxes until more government inefficiencies are eliminated. A few legislators have said they won’t increase funding for education until some of Oklahoma’s 500-plus school districts are consolidated.

“At the end of the day they forget we have superintendents in Oklahoma making what principals make,” he says.

Oklahoma does have a large number of districts, but Hime says administrative costs are ultimately low because so many Superintendents of small districts often work double-duty as principals and teachers, and, sometimes, maintenance workers.

Data appear to support this. StateImpact analyzed the U.S. Census Bureau’s Public Education Finances report and numbers from the National Center for Education Statistics and found that, when factoring for the costs of principals and other support staff, Oklahoma’s total administrative spending is lower than every comparable state except Utah’s.

“If they want to have a realistic conversation about consolidation around academic achievement and educational opportunity — that’s what we should do.”

Furthermore, he says, giving teachers a raise is the easiest way to boost the amount of money schools spend on instruction.