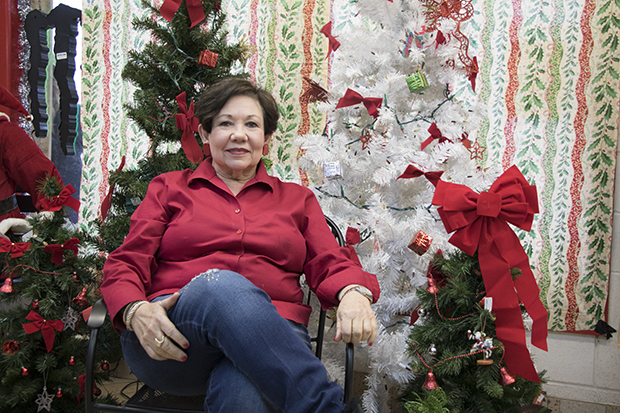 It’s Christmas season in North Pole, Okla., a blip on the map near Broken Bow. No one’s sure how this community along State Highway 3 got that name, but Charlette Hearne embraces the community at her North Pole convenience store, and holiday decorations abound. Hearne is from Colorado, but fell in love with Broken Bow Lake back in the 1970s.

“I was attracted to Broken Bow because you could ski and read the fine print on the skis five foot down in the water,” she says. I mean, it was so clear.”

Hearne’s water advocacy roots go back to a trip she made to Israel and Jordan with her family, most of whom forgot to pack water for a desert crossing one afternoon.

“As we drove for hours through the desert, we became thirstier and thirstier, and realized those people traveling on those camels — all around us they had no water,” Hearne says. “It just kind of was magnifying the need and how fortunate in America we were, and how we should preserve that life-sustaining water.”

Since then, Hearne has become one of the most vocal forces behind the resistance to out of state water transfers and the effort to pipe water from Sardis Lake to Oklahoma City. She’s organized thousands in southeast Oklahoma to rally around that cause. In the early 1980s, Hearne rallied local residents together against a Texas developer trying to get a permit to build a tubing and river rafting resort along the lakeshore.

“We opposed it and requested an Army Corps of Engineers hearing. At that hearing we had more than 700 people come,” she says. “So at that time, we made a statement that we care about Broken Bow Lake, we care about our water, and we will do what it takes to protect it.”

In the early 2000s, Texas was back with a plan to quench the growing Dallas area’s thirst with water from southeast Oklahoma. Hearne wasn’t having it.

“We formed the Southern Oklahoma Water Alliance, and in that we went to all 22 counties of the Chickasaw and Choctaw Nations and formed independent SOWA chapters,” Hearne says. “We developed a huge membership, and we would lobby.”

Hearne says it was at a Southern Oklahoma Water Alliance meeting that the idea for the 2002 moratorium on out of state water sales was first developed. Thanks to the U.S. Supreme Court, Texas didn’t get the water it wanted. But it wasn’t long before another plan to move water out of southeast Oklahoma was being pushed. This time, Oklahoma City wanted to pipe water from Sardis Lake to meet its future water needs. Choctaw Nation officials wanted Hearne’s help again.

“This was after we had actually told Texas ‘no you can’t have our water.’ And so I was really satisfied to stay at home. And all of a sudden you start hearing rumblings of the huge, massive transfer of water out of Sardis,” Hearne says. “Chief Baton now — and at that time he was the assistant chief — was holding meetings in communities in the area. And I didn’t go, and I didn’t go, and finally a lot of the SOWA people called me and said ‘Charlette you have to come.’ So I kind of dragged myself over there just to listen and see what was going on and left as president of the organization that same day.”

The organization was Oklahomans for Responsible Water Policy, which Hearne says has grown to more than 16,000 members. The group fully backed the Choctaw and Chickasaw Nations in their lawsuit against the state over who should have control over water across southeast Oklahoma. The case was settled in the summer of 2016, and approved by President Obama in December. It limits how much water Oklahoma City can take from Sardis, and gives the tribal nations a seat at the table when decisions about the area’s water are made.

Hearne recently stepped down from the water advocacy group due to health problems. She says that should not be taken as a sign she’s happy with the tribal water agreement.

“If I were truly happy we wouldn’t be giving them one drop of water unless they were thirsty,” Hearne says. “I am all for science moving us forward, and I think that you should use every drop of water available to you, which includes re-use, conservation, the water under your feet, before you start robbing from your neighbor. So we want science to lead the way. And I don’t think there’s any of us that would love to see anyone go thirsty, even a Texan. We’d carry them a barrel of water.”

Hearne has won most of the water fights she’s been in, but says southeast Oklahoma’s water still isn’t safe from outsiders. Hearne says the real test for the new tribal water agreement won’t come until the state’s next major — and inevitable drought.