Oklahoma Attorney General Scott Pruitt at the state capitol in 2016. 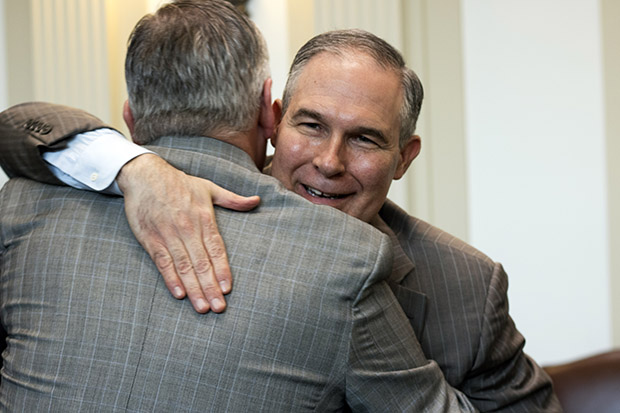 Oklahoma Attorney General Scott Pruitt at the state capitol in 2016.

President-elect Donald Trump has picked Oklahoma Attorney General Scott Pruitt to lead the U.S. Environmental Protection Agency. Pruitt made a name for himself fighting against the very federal agency he is poised to lead, and the pick is seen by many as a clear signal that Trump intends to dismantle the environmental legacy of President Obama.

Oklahoma’s attorney general is a vocal and persistent critic of the EPA and he has accused the federal agency of carrying out the Obama Administration’s “activist agenda.” He fought back Obama-era environmental priorities in testimony on Capitol Hill and in federal courtrooms across the country.

Pruitt’s office did not respond to interview requests, but in a 2013 interview with StateImpact, he said the Obama administration was working lock-step with environmental groups to hobble the coal and natural gas industries.

“The attitude with the EPA and certain environmental groups is that, ‘Fossil Fuels are bad. Period,’” he said. “And they’re doing everything they can to use the rule-making process to attack both.”

Pruitt has sued the EPA to block rules limiting carbon emissions from power plants. He also joined lawsuits against the agency brought by attorneys general in other states. Pruitt has railed against the Clean Power Plan, new water regulations, ozone and methane limits, endangered species designations and rules on regional haze from power plants. Pruitt has also sued the EPA for settling lawsuits. He accused the Obama administration of using these legal settlements to agree to environmental regulations that overstep federal authority.

Many of those efforts failed, while others gained traction. One significant win for Pruitt came in February 2016 when the Supreme Court halted implementation of Obama’s Clean Power Plan while legal challenges mounted. The high court appears likely to rule on the case next year.

Pruitt helped mastermind this coordinated legal effort to fight the federal agency through the courts, an alliance that’s made him popular among conservatives.

I am pleased that PE Trump has selected @AGScottPruitt to lead the EPA >>> full statement here: https://t.co/YRScv4w4Sm

#ScottPruitt is a proven leader who doesn’t believe we should create law out of regulations. He’ll do a great job cutting #redtape at #EPA. pic.twitter.com/4RBcOduKx9

Pruitt was a state legislator before he was elected attorney general in 2010.

Supporters in Oklahoma say Pruitt is aggressive and high-energy. Glenn Coffee was in Pruitt’s freshman class in the Oklahoma Senate, and the two worked together when Coffee became Secretary of State and Pruitt was elected AG.

“I think he has a head start on understanding what he views as wrong with that agency,” Coffee says.

Coffee thinks Pruitt will reform the EPA, but doesn’t believe the Oklahoma AG will be single-minded in installing change. “He’s capable of not just taking a firm position and fighting for those interests but also being a consensus builder and helping bridge the gap and find solutions with other parties,” Coffee says.

Corporation Commissioner Todd Hiett was the Republican house speaker when Pruitt was a state senator — they also battled each other in a primary race for Lt. Governor in 2006. Hiett says Pruitt is a tough opponent, but he expects Pruitt to be a pragmatic reformer at the EPA.

Hiett and other supporters point to the long-running Sardis Lake dispute between the state, Oklahoma City and Native American nations that was settled in August as proof that Pruitt is capable and interested in building a consensus on divisive issues.

Pruitt has close ties to the oil and gas industry —  a big financial backer of his political campaigns — and he has taken the unusual step of collaborating directly with industry to oppose the EPA and Obama. Pruitt has also cast doubt on the science of climate change and the role mankind and industry is playing in a warming planet. This has won friends at fossil fuel firms and among Republicans in energy-rich states …

As EPA Administrator Scott will be an effective voice for a balanced policy that safeguards our environment without undermining our economy https://t.co/9yaeGkMnkm

.@nytimes editorial : “Pruitt is the wrong person to lead an agency charged w/ custody of the nation’s environment” https://t.co/v7I4N26Znu

Tell your senator that you’re concerned about Scott Pruitt’s EPA nomination & what it means for our environment: https://t.co/RJqmnRMEmS https://t.co/eTVjOb5W8D

Pruitt has not been shy about his alliance with the fossil fuel industry, which will likely have a much bigger seat at the table when the EPA sets its regulatory agenda.