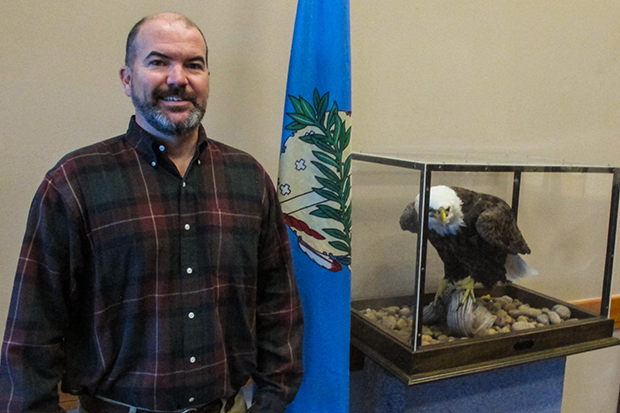 J.D. Strong has been an influential leader in Oklahoma water issues for many years, and served as Executive Director of the state water regulator since 2010. Earlier this year he left the Water Resources Board to head the Oklahoma Department of Wildlife Conservation.

StateImpact talked to Strong in his new office to talk about the water challenges that remain and the issues facing wildlife conservation that are now his problem.

Q: Did your decision to leave the OWRB have anything to do with a recent legal settlement between the state and the Choctaw and Chickasaw Nations over control of southeast Oklahoma water? Were you ready to go after that process?

A: It really was coincidence. I mean it wasn’t because of the fact that we’d wrapped that agreement up and I was looking for some new gig to jump into at all. It just so happens that we got that wrapped up at the same time Richard Hatcher decided he wanted to retire from the Department of Wildlife, and there was no pressure, outside pressure, or pushing, or anything else. So it really was propitious timing.

Q: As you leave the Water Board and you look back at your time there and what challenges they still face, what are some of the biggest issues still facing Oklahoma when it comes to water?

A: I think the biggest issue will continue to be how we can drought-proof our state. You know, we went through this recent five-year drought, and that was a big wakeup to a lot of people — in fact an entire generation of people that didn’t even really know what drought was really like. And now that we’ve had a year of wetness, I fear that many of them are forgetting those lessons again. So when it comes to conserving water, reusing water, recycling water, there will be additional droughts coming down the pike, and they could be — there could be some that are worse than we’ve ever experienced before or since statehood.

Q: Now the way budgeting works around here is quite a bit different than it does at OWRB. I know that was a huge issue, budget cuts at OWRB. It’s different here, right? This is not an appropriated agency.

A: Correct. Department of Wildlife is a non-appropriated agency. We rely completely upon sales of hunting and fishing licenses, as well as some federal tax collections that come in to help. Part of the federal taxes that are collected are on gun sales. So when you see surges in gun sales, you see huge tax revenues coming in for state fish and wildlife agencies like ours. And often times we see that, especially in middle America, when President Obama makes some — proposes some new gun control legislation or whatever. So you see fits and spurts in some of these pots of money that come into the agency that do require us to have to expand and contract programs accordingly.

Q: I’d heard some talk — because, obviously, the state is very desperate for money — that they could take some from this agency, for example, kind of dip into this. Have you anything about that, and what are your feelings on that if you have?

A: Well I don’t know that I’ve heard anything substantial in that regard. There are often rumors swirling around about people having pots of money robbed all over the place. So I think that those who pay the hunting and fishing fees for the services that we provide would probably be literally up in arms if they saw those proceeds stolen away from this agency to go to some other purpose.

Q: What are some of the challenges facing wildlife conservation in Oklahoma that you’re now having to face yourself?

A: A more and more urban population, and the fact that they — as you become a more urban population, you become a little more detached from the outdoors, rural Oklahoma, that sort of thing. Fewer and fewer people out on the farm, in rural Oklahoma, where hunting and fishing is just second nature, to finding ways to challenge a more urban population to get outdoors, experience the great eco-diversity that we have across the state of Oklahoma, the most eco-diverse state mile for mile of any state in the country. There’s so much abundant outdoor opportunity, whether it’s hunting and fishing, or it’s just wildlife viewing, bird viewing, that sort of thing. There are great opportunities scattered across this state where you can go see everything from alligators to antelope depending on where you want to go and what you’re into.

Q: All right, well you weren’t forced out. You didn’t get tired of it. It’s just the job you always wanted finally opened up after twenty-something years.

A: Exactly. When your New York Yankees job comes along, you’ve got to jump on it.