A worker with the Citizen Potawatomie Nation smooths out dirt and gravel poured atop a disputed water pipe laid alongside U.S. Highway 177. 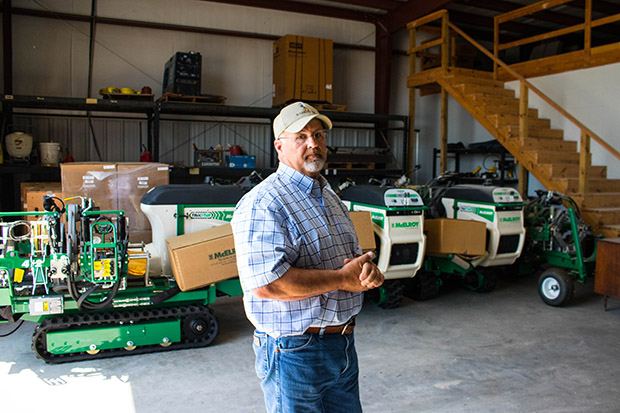 J.C. Goodson stands in the warehouse of Rainmaker Sales in Shawnee, Okla.

The State of Oklahoma and the Citizen Potawatomi Nation are clashing in court over the growth of a tribally controlled rural water district. The state is questioning the district’s legal status, but tribal leaders suspect the confrontation is about politics — not water pipes.

J.C. Goodson is in the plastic pipe business. He sells tons of the stuff — seriously, tons.

“That coil weighs 2,000 to 3,000 pounds depending on the diameter,” Goodson says, showing off truck-sized spools of polyethylene pipe that line the 10-acre gravel yard behind Rainmaker Sales in Shawnee.

The flexible pipe is a mainstay in the oil and gas industry and routinely sold to cities and towns. “We provide an awful lot of water to various other distributors and municipal systems for potable water,” Goodson says.

Which is ironic. Rainmaker sells pipe used by public water systems, but the business itself doesn’t have enough water to fill a hose.

“Can’t really even water the trees with the water we’ve got,” Goodson says. “It’s all we can do to flush our toilets and to have water for our employees. And we have to bring in water to drink.”

Rainmaker has two on-site water wells, but they’re no good. The water is undrinkable and the pressure is unusable. Goodson wants to upgrade his facility by adding a station to wash equipment, but he can’t do that unless he has better water service.

The company’s  location is too remote for city water, so the Citizen Potawatomi Nation agreed to add a small section of pipe and connect the small business park to service provided by Pottawatomie County Rural Water District No. 3, which the tribe controls.

But the Attorney General’s office and the Oklahoma Department of Transportation asked an Oklahoma judge for an injunction preventing the district from laying pipe in the right-of-way of U.S. Highway 177, which runs in front of Rainmaker’s office. 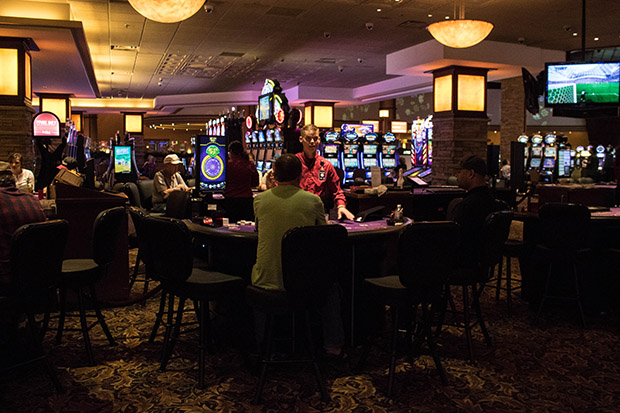 A dealer and players inside the Citizen Potawatomi Nation's Grand Casino Hotel and Resort in Shawnee, Okla.

“This should have been the easiest kind of transaction, one we’ve done hundreds of times,” says John “Rocky” Barrett, chairman of the Citizen Potawatomi Nation.

Rural Water District No. 3 was formed in 1997 by the Pottawatomie County Commission. In 2005, the tribe acquired the water district, which was saddled with debt and struggling with leaky pipes, unreliable service and lackluster customer growth.

County commissioners and the Oklahoma Water Resources Board signed off on the deal. County commissioners in 2008 approved an annexation of county land by District No. 3, allowing it to widen its territory and add more than 400 customers. The annexation was protested by officials in nearby cities who had hoped to add the rural customers as their communities grew, but Barrett says District No. 3, historically, had few problems with state agencies.

“We operated for 10 years without a hitch,” he says. “We absolutely didn’t have a hitch until this came along.”

Things changed in September 2014. Water district officials filed the paperwork, but the Department of Transportation refused to act on permits for the pipe extension along U.S. 177, records show.

“They simply decided to not respond and deny us the ability to lay the line there,” Barrett says.

The water district waited, and waited. Under state statute, rural water districts are allowed to lay pipe along “any street, road, alley or highway which is owned or held by the state, or any political subdivision.”

Attorneys for the tribe and District No. 3 contend inaction on the permit is unjust. “The law doesn’t really give them that option,” Barrett says. On April 26, 2016, they notified transportation officials of their intent to start construction without a permit. 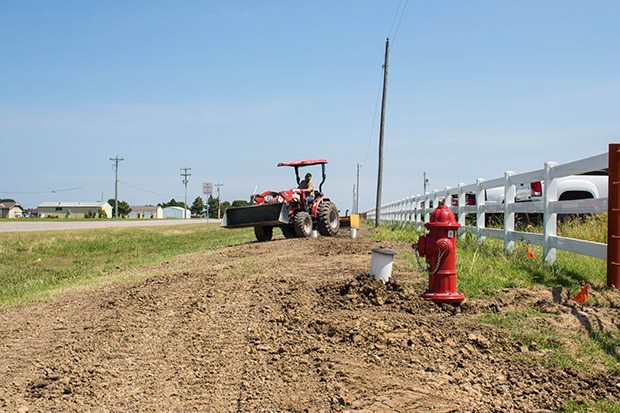 A worker with the Citizen Potawatomie Nation smooths out dirt and gravel poured atop a disputed water pipe laid alongside U.S. Highway 177.

A few weeks later, the Attorney General’s office requested the injunction in state court. The water district responded in federal court on June 15, firing back against the AG’s office, the Department of Transportation and Gov. Mary Fallin.

Representatives for the Governor’s office and Department of Transportation declined StateImpact’s interview request. The Attorney General’s office did not respond.

In court filings, attorneys for the state agencies argue District No. 3 hasn’t proved it was legally formed, and shouldn’t have started construction without a permit. Water district officials disagree.

Barrett and other sources close to the Citizen Potawatomi Nation suspect the pipe fight is petty political payback for a much bigger battle over sales taxes.

District No. 3 requested the U.S. 177 pipe permit a few months after state tax officials in May 2014 challenged $27 million in tribal sales tax exemptions and moved to revoke the tribe’s alcoholic beverage permits.

A federal arbitrator ruled in favor of the tribe in April 2016, and now the two sides are squaring off over highway rights-of-way.

“It really wasn’t about water and it wasn’t about compliance, it was really all about another way to bring pressure to bear on the tribe,” Barrett says.

At Rainmaker Sales, J.C. Goodson bristles at the politics, but he says the Citizen Potawatomi Nation has been good to his business. The state and federal court battles concerning the pipe in front of his office are ongoing, but a fresh construction scar of compacted dirt and gravel traces a line between the barbed-wire fence and U.S. 177 — the project is complete.

“We are plugged in. We’ve shut our wells off and pulled our pressure tanks, and now we have water to all three buildings here,” he says.

Now, the toilets flush, and employees don’t have to drink bottled water. Goodson says the section of water pipe in question came with another bonus: A fire hydrant.

“That’s going to bring us a pretty nice discount on our insurance,” he says.