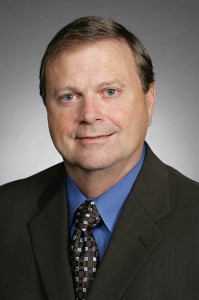 State Rep. Brian Renegar, D-McAlester, and three of his House colleagues on Monday wrote a letter to Oklahoma Attorney General Scott Pruitt asking for his opinion on whether it’s legal for members of the state Water Resources Board to stay on the OWRB even after their positions have been eliminated.

The language of Senate Bill 965, passed into law in 2013, states that upon expiration (May 2016) of the at-large position presently “held” by Richard Sevenoaks, he will be replaced by a member from the new Southeast Oklahoma District 9.

The letter comes after StateImpact reported June 16 that Gov. Mary Fallin, who fills OWRB vacancies, missed the May 2016 deadline to fill the now-expired term of Richard Sevenoaks. Sevenoaks is still on the Water Board. OWRB Director J.D. Strong told StateImpact it’s common for board members to stay on until their replacements are sworn in, even for years, and a 1998 attorney general’s opinion justifies it.

But Renegar contends in the letter the 1998 AG’s opinion doesn’t apply to the current situation because, not only has Sevenoaks’ term expired, the office he was serving in no longer exists as of May 2016.

We realize that in 1998 Attorney General Drew Edmundson issued an opinion that states “under specific provisions of Article XXIII, Section 10 of the Oklahoma Constitution, incumbent office holders are authorized to hold over and continue to serve until their successors are duly qualified.” We feel that this Attorney General opinion does not pertain to the question of concern because, subsequent to the enactment of Senate Bill 965, there is no longer and “at-large position” in the present makeup of the OWRB board. Additionally, there are many citizens in Southeast Oklahoma District 9 of the OWRB that would be “duly qualified.”

Senate Bill 965 changed the makeup of the nine-member water board. In the past, the governor appointed one OWRB member from each of the state’s congressional districts and four at-large members who could be from anywhere in the state.

Renegar is asking Attorney General Pruitt to tell Gov. Fallin she isn’t complying with the new law. OWRB appointments need Senate approval, too, so a new member couldn’t be confirmed until at least 2017, when the Senate meets again.