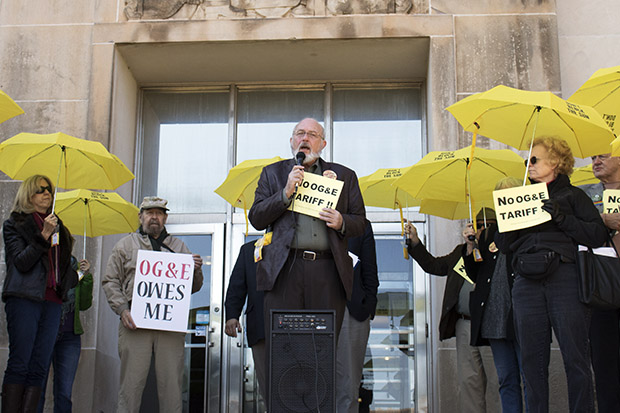 Oklahoma Gas and Electric, the state’s largest electricity utility, wants regulators to approve new fees for customers who install solar panels. The request is now in the hands of Oklahoma’s three-member Corporation Commission, which has to weigh the real cost of reliable electricity and put a fair value on power from the sun.

There aren’t many OG&E customers like Jim Long. The 76 year old is a retired engineer, which is exactly how he approached his solar energy project.

Long began with an experiment. He bought a single solar panel to power a computer server in his basement. Long tested the setup, tried different configurations — going as far as adding a battery — and measured everything. The small solar setup never provided enough juice to power the server without needing electricity from the outlet, but the data was invaluable.

“I’m a little too old to be doing this,” Long says with a laugh.

The numbers were so promising, Long went full-scale in the Spring of 2015 and installed 30 solar panels on the roof of his single-story home in Norman, Okla.

OG&E has about 800,000 customers, but fewer than 250 “distributed generators” in Oklahoma — customers like Long who generate electricity, usually through rooftop solar panels, and sell it back to the grid.

“My primary motivation was just to get my bill down,” Long says.

Long’s electric bills went down dramatically. His electricity tab during Oklahoma’s expensive, air-conditioned August was $224 in 2014. This year, his August bill was $36. It could be the last time Long sees a summer electric bill that low.

OG&E argues solar producers are getting more electricity credit than they deserve. The utility’s current rate structure recoups the cost of electricity and delivery — all those power lines, transformers and other equipment necessary for power to be available at the flick of a switch.

The utility’s proposal would measure a customer’s electricity use in 15-minute cycles to determine peak demand. A $2.68 per kilowatt per month charge would be levied on customers. With most customers registering peak demands between 6 and 8 kilowatt hours, typical demand charges would range from $16-21 per month, The Oklahoman’s Paul Monies reports.

In interviews with representatives and testimony filed with state regulators, OG&E says solar producers use the grid to make and take electricity — but aren’t paying their share of those demand costs. Regular customers subsidize a portion of those low bills, according to testimony from Roger Walkingstick, a retired OG&E regulatory administrator who now works for the utility as a consultant.

OG&E doesn’t have many solar producers today, but panel prices are dropping and the industry is expected to boom. 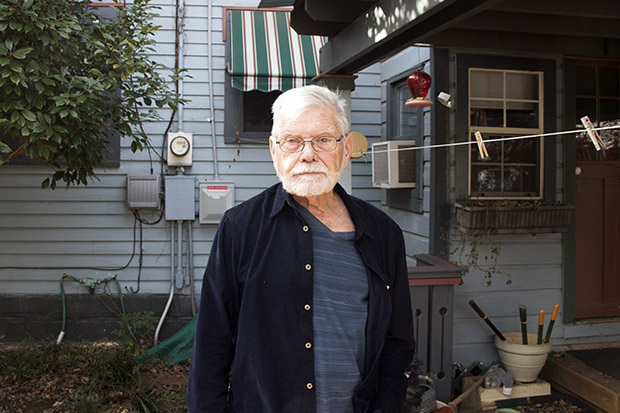 Jim Long installed a 30-panel solar system on the roof of his home in Norman, Okla.

The Alliance for Solar Choice, The Oklahoma Chapter of the Sierra Club and solar industry groups have protested the demand charges proposed by OG&E. In hearings and public comments, solar advocates, including customer-generators like Long, question the utility’s motives.

“My feeling is that this is an effort to stifle this, keep it from growing,” he says.

Ashley Brown, the executive director of the Harvard Electricity Policy Group at Harvard University says such arguments are a “false characterization of the issue.”

”They portray this issue as sort of the solar company Davids vs. the utility Goliath,” says Brown, who was hired by OG&E to help make its case to regulators. “It’s really a battle between customer groups.”

The debate over new charges on small solar producers centers on two key issues: the cost of maintaining the grid, and the value of the solar electricity those producers generate.

Solar advocates say OG&E’s cost estimates are outdated and the utility is downplaying transmission, distribution and environmental benefits that add to the value of solar energy. Brown says the solar industry is pushing for policies that protect its business interests.

“This is really a question of just how much money are these solar companies going to be allowed to extract from consumers,” he says.

Brown says the current rate structure allows wealthy customers who can afford to install solar panels to have their discounted electric bills subsidized by other customers.

Oklahoma’s three Corporation Commissioners are considering OG&E’s request. They have to make a decision by Dec. 31, under requirements of Senate Bill 1456, a 2014 law the utility pushed for.

The Commission might make a decision to meet the deadline technically, but turn around and ask OG&E for more detailed cost information in its upcoming general rate case — a recommendation Administrative Law Judge Jacqueline Miller made in a Dec. 14 report to the commission.

Jim Long is watching the case closely. He’s one of 15 solar producers who will be billed if the new charges are approved. Most of the the other solar producers will be grandfathered in to the old rate system.

Long spent $20,000 on his 8-kilowatt solar system. The savings should have paid for the system in 14 years. If the utility gets its way, Long says that payoff period nearly doubles. Still, Long says solar energy is a good investment.

“The other side of it was, you know, reducing the carbon footprint,” he says. “I’m not sure I’ll ever live long enough to pay it off.”

Long’s home is located just a few blocks from the University of Oklahoma campus. He says students and young people are eager to talk to him about his panels and solar power’s potential. Long loves it. The former engineer is excited that his little solar experiment is generating conversation.

“It was really encouraging to me to see college-aged students into this and thinking about this,” he said. “I think that’s a really good sign for the future.”