A dredging barge scrapes the bottom of Wuarika Lake and sends sludge to a holding pit via an underwater pipeline. 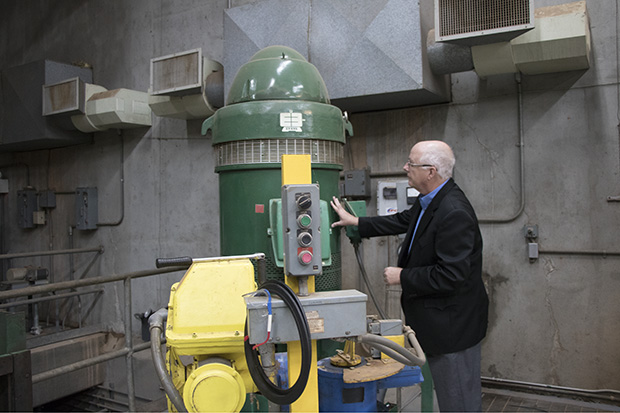 Dave Taylor, director of the Waurika Lake Master Conservancy District, checks on one of the water pumps at the lake's pump house, which send water to communities like Lawton and Duncan.

Oklahoma’s lakes weren’t built to last forever. Over time, dirt and debris are slowly filling them in. Right now, there’s no good way to solve the problem, but cities that rely on Waurika Lake are turning to costly and complicated efforts to save their water supply from silt.

At the Waurika Lake pump house, loud green engines are hard at work pulling water from the lake and sending it along pipelines, each labeled with their destination: Duncan 1, Lawton 2. The water pumped here supplies a large swath of southwest Oklahoma. When drought threatened to drive lake levels below the shallowest intake gate, lake manager Dave Taylor found another problem beneath the water’s surface.

“We couldn’t open or close the bottom set of gates,” he says. “And we couldn’t figure out what was going on. We found that we had about 20 to 23 feet of silt right up against the pump house.”

Waurika Lake was being squeezed by drought from above and silt down below. By early 2015, the lake was on the verge of being unusable as a water source. Something had to be done.

This spring, the cities that rely on Waurika approved a $10 million project to replace pump components and dredge part of the bottom of the lake. 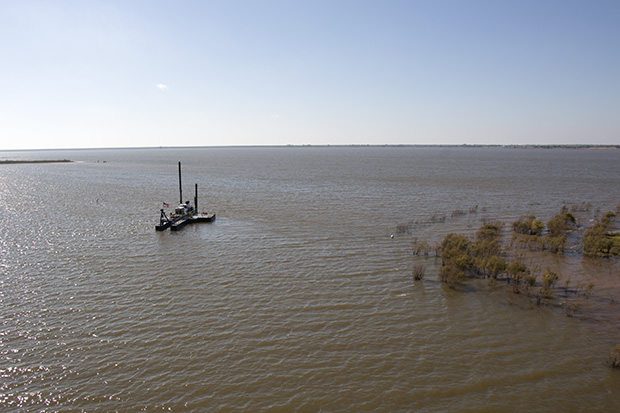 A dredging barge scrapes the bottom of Wuarika Lake and sends sludge to a holding pit via an underwater pipeline.

“This project lets us continue a vision that started about seven year ago,” Taylor told the crowd at the project’s opening ceremony on Nov. 3. “That vision was that this region never again run out of water.”

Taylor stands in front of a 17–acre hole where silt ends up after a dredging barge drags the lake bottom and pipes it there. As far as dredging projects go, this is small — only about 100 feet wide and 4,000 feet long. It’s the only dredging project happening in Oklahoma right now. But it likely won’t be the last.

“This is becoming sort of a hot topic,” says Greg Estep with the U.S. Army Corps of Engineers. “What are going to do with our projects once they start silting in?”

The Corps of Engineers built many of Oklahoma’s major lakes more than a half century ago. The waterbodies had projected lifespans of between 50 and 100 years before silt was expected to encroach into waters used for drinking and recreation. Estep says it could be another century before those lakes completely fill with sediment, but in the meantime, silt problems will mount, reducing the amount of water available for cities, recreation and conservation.

“We’ve seen a lot of it on Lake Keystone,” he says. “Twenty years ago an area may have been able to support a marina. Now it’s silted in.”

“It takes so much money, so much effort, so much time to dredge a small portion of a lake that it doesn’t even generally keep up with the average annual sediment into that reservoir,” Estep says.

“Just to keep up with the amount of sediment that comes into Lake Eufaula on an annual basis, you’d have to be running — I think it was about 3,500 six-yard dump trucks a day.” 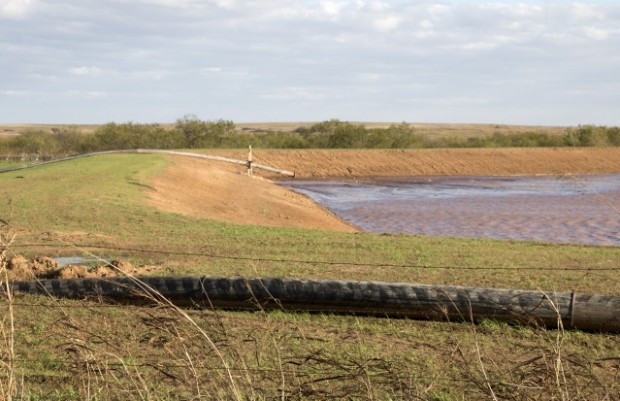 A pipe deposits sludge into a 17-acre pit near Waurika Lake, where it will be left to dry.

The truth is, for now , there’s really no fix to this growing problem. The Corps is doing studies, and hopes to make some recommendations in the not too distant future. Until then, communities and officials will have to face the silt situation in their own way, in their own time, like Dave Taylor at Waurika Lake.

“We knew we had about a year to 15 months worth of water left, and the project would take 11 months, so we got started just in time,” Taylor says.

All the recent rain has extended that deadline, but hasn’t dampened the urgency to stop the silt before drought strikes again.