Gary Matli, a field inspector supervisor for the Oklahoma Corporation Commission, checks on a disposal well located near Guthrie, Okla. 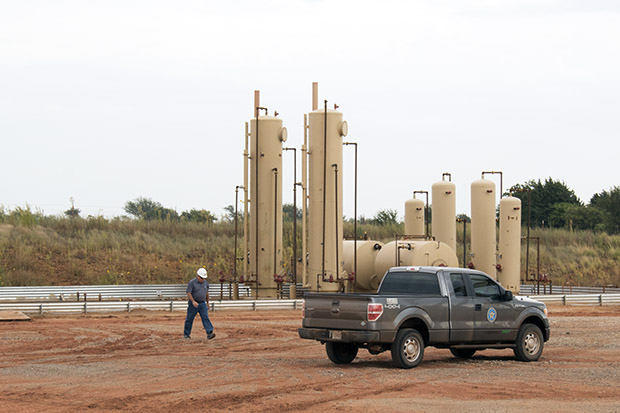 Gary Matli, a field inspector supervisor for the Oklahoma Corporation Commission, checks on a disposal well located near Guthrie, Okla.

The oil and gas industry practice of pumping waste fluid into disposal wells is likely responsible for Oklahoma’s exponential surge in earthquake activity.

State officials initially were reluctant to publicly acknowledge the link, which was made in numerous peer-reviewed scientific papers. That changed in 2015.

The Oklahoma Corporation Commission, the state’s oil and gas regulator, is now more frequently ordering plug-backs and issuing quake-related shutdowns and volume limits at disposal wells, which scientists say are likely fueling most of the earthquake activity in Oklahoma.

Here’s an updated list of the earthquake-related directives and actions issued by the the Corporation Commission.

The Corporation Commission on August 18 asked 11 oil and gas operators to shut down two wastewater injection wells and reduce the amount of fluid pumped into 19 wells near the towns of Luther and Wellston in central Oklahoma.

The wells regulators want to shut down are operated by New Dominion and Hulen Operating company. Both are located within three miles of concentrated earthquake activity, including 3.7 and 3.9-magnitude temblors on August 16 and 17, the commission says.

The wells receiving requests for volume restrictions are within 10 miles of the shaking.

The Corporation Commission is asking more than 120 oil and gas operators to reduce the amount of wastewater injected into over 400 underground disposal wells.

In total, the plan should reduce disposal volumes by more than 300,000 barrels a day — a 40 percent cut below volumes recorded in 2014, when the region’s earthquake activity started spiking.

“The central Oklahoma volume reduction plan covers an area where we have taken numerous, localized actions over the past 12 months, such as in the Cushing, Crescent and Edmond areas,” Tim Baker, the commission’s oil and gas conservation division director, said in a statement.

In a separate, but related action issued at the same time, the Commission expanded its area of heightened earthquake concern. That designation means companies operating an additional 120 wells will be asked to turn over more data and prove to state inspectors their wells aren’t drilled too deep.

The effort has been in the works since October 2015, officials say. It’s the largest action of its kind in Oklahoma, covering three-dozen companies operating nearly 250 wastewater injection wells over 5,300 square miles in north-central and northwestern parts of the state. The region has been rocked by waves of strong quakes, including a 5.1-magnitude temblor on Feb. 13 — the state’s third largest ever recorded.

The Oklahoma Corporation Commission wants to reduce disposal volumes throughout the region by roughly 40 percent. The expansive plan includes wells that are in the path of seismic activity that appears to be spreading to the northwest, says commission spokesman Matt Skinner.

“We’re trying to get out ahead of the movement of these quakes,” he says.

State authorities on Jan. 13 placed new limits on oil and gas operations in northwestern Oklahoma near the town of Fairview. The area has been hit with a string of earthquakes, including more than a half-dozen that were greater than magnitude-4.0.

The operators of 27 disposal wells received the directives, which are designed to reduce by 18 percent the amount of fluid pumped below the area.

There is also some preliminary evidence that recent storms and a related power outage could have contributed to the shaking near Fairview, Tim Baker, director of the commission’s oil and gas division said in a statement.

“We are also concerned about the possibility of a higher potential risk of earthquakes as a result of a number of disposal wells stopping operation at once because of a general power failure, and then resuming full operation when power is restored,” he said. “These conditions existed in the Fairview area. We are now advising operators to gradually restore operations in the event of a sudden shut-down due to power failures.”

State authorities on Jan. 1 placed new limits on oil and gas operations near the city of Edmond after a string of widely felt earthquakes recorded on Dec. 29, 2015 and Jan. 1, 2016. The early-morning temblors awoke many residents, knocked out power to about 4,400 customers, and fueled new calls for a political response to the oil-linked earthquake boom.

State oil and gas regulators on Dec. 3 ordered oil and gas companies to shut down seven disposal wells near Byron, Cherokee and Medford after a string of earthquakes in those areas. The shaking includes a 4.4-magnitude temblor recorded near Cherokee on Nov. 23, and a widely felt 4.7-magnitude quake that shook near Medford on Nov. 30.

The wells ordered shut down, owned by Sandridge Exploration and Production and Eagle Exploration Production are located within three miles of the shaking, Corporation Commission data show. Volume cuts were ordered for more than 60 other disposal wells.

The cutbacks ordered in the Cherokee and Medford areas build upon previous disposal restrictions issued by the commission in November.

State oil and gas regulators on Nov. 19 ordered two oil and gas companies to shut down four disposal wells near the town of Crescent after a 4.0-magnitude quake was recorded earlier that day.

The wells ordered shut down, owned by Devon Energy and Stephens Energy, are located within three miles of the shaking, Corporation Commission data show. The two companies voluntarily shut down a trio of disposal wells after a swarm of quakes in July. That wave of seismic activity peaked with a 4.5-magnitude temblor that damaged brick walls on the Crescent High School gym, The Enid News & Eagle reported.

The commission on Nov. 20 added additional directives for oil and gas operators in the Crescent area, ordering volume cutbacks at seven disposal wells.

State oil and gas regulators on Nov. 19 ordered two oil and gas companies to shut down operations at a pair of disposal wells and limited injection volumes at 23 wells after a 4.7-magnitude quake was recorded near Cherokee.

Korey Andersen, who works in Wichita’s City Hall, said the quake was “the most intense that I’ve felt.”

“It shook our whole apartment complex. It shook the whole building,” she said. “But there was no damage, nothing flailing off the walls or anything like that.”

The two wells ordered shut down — Aexco Petroleum’s McDaniel SWD 1-18 and Chesapeake Operating’s Dutch Harbor SWD 1-14 — were less than three miles from seismic activity. The 23 other wells given volume cutbacks were located within 10 miles of the shaking, commission data show.

“In addition, disposal wells within 10 to 15 miles of the earthquake activity are being placed on notice to prepare for possible changes to their operations,” commission spokesman Matt Skinner said in a statement.

State oil and gas regulators on Nov. 16 limited activity at two disposal wells after a 4.3-magnitude quake was recorded near the city of Fairview.

The two wells are located within 10 miles of the temblor, which was reported on Nov. 15. The Corporation Commission ordered D&B Operating to shut-in and plug-back the Rich 1-32 disposal well; PetroWater Solutions was directed to reduce by 25 percent injection volumes at the Bouse 1A-9 disposal well.

State oil and gas regulators on Nov. 11 restricted activity at disposal wells after a barrage of earthquakes near the town of Medford in north-central Oklahoma.

The Corporation Commission ordered five operators to limit injection volumes at nine disposal wells. One operator was also ordered to shut-in and plug-back, a procedure directed at wells suspected of being too deep.

The wells are all located within 10 miles of an region where a 4.1-magnitude quake was recorded on Nov. 7.

State oil and gas authorities on October 19 expanded limits on disposal wells near Cushing. The shutdowns and volume limits come amid renewed worry about seismic activity near one of the country’s largest crude oil storage hubs.

State oil and gas authorities limited activity at five disposal wells after a string of earthquakes recorded near Cushing.

The orders apply to five disposal wells. The Corporation Commission ordered operators to shut down two wells, and limited injection volumes at three other wells.

A wave of small quakes struck near the city, including a 3.8 to 4.1-magnitude event on Sept. 18. No damage was reported in or near Cushing, which is home to the largest commercial crude oil storage hub in the U.S.

State oil and gas authorities on Aug. 3 ordered the operators of 23 disposal wells in two counties to reduce the amount of wastewater pumped underground.

The directives were issued less than a week after two companies shut down a trio of wells near the town of Crescent, where a swarm of earthquakes culminated in a widely felt 4.5-magnitude temblor on July 27.