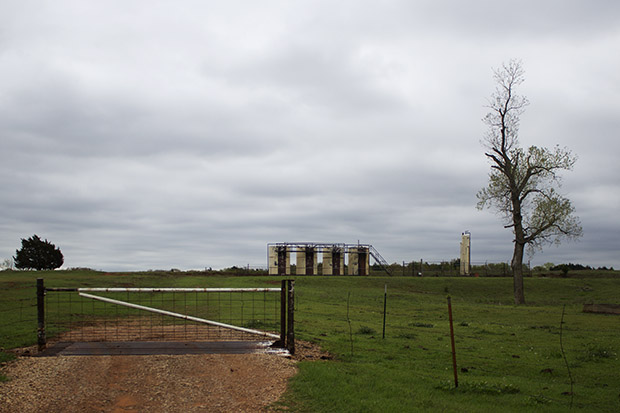 Oklahoma oil and gas authorities on Monday ordered the operators of 23 disposal wells in two counties to reduce the amount of wastewater pumped underground.

The Oklahoma Corporation Commission’s orders, known as “directives,” were sent to disposal well operators in Logan and Oklahoma counties. The move comes less than a week after two companies shut down a trio of wells near the town of Crescent, where a swarm of earthquakes culminated in a widely felt 4.5-magnitude temblor on July 27.

Under the new orders, companies have 60 days to reduce by 38 percent the volume of waste-fluid pumped into the wells. The targeted cutbacks are designed to reduce total waste-fluid disposal in the area by 3.4 million barrels, says Corporation Commission Spokesman Matt Skinner.

“This is an area that we have seen a sharp increase in seismicity and, most notably, this is an area for which we do not have […] the wells that are both deep and high volume,” he says.

Most of the agency’s previous actions have focused on those deep, high-volume wells, Skinner says. In March 2015, the Corporation Commission ordered the operators of about 350 disposal wells to prove they weren’t pumping waste-fluid into crystalline “basement rock,” a known risk factor for triggering earthquakes. The agency in July 2015 expanded a stricter version of the “plug-back or prove it” directive to cover 200 more disposal wells.

Scientists say disposal wells — which oil and gas companies pump full of toxic wastewater and fluid byproducts of drilling and fracking — are likely driving most of the earthquakes in Oklahoma, which is now more seismically active than California. Recent research has linked Oklahoma’s earthquake uptick with high-volume disposal wells and regions of concentrated disposal well activity.

The commission has previously ordered individual companies to reduce the volumes of wells in quake-prone regions, but this is the first time the agency has demanded cutbacks at a group of wells, Skinner says.

“We fully expect there will be other volume reductions,” Skinner says.

“This is an issue completely outside the scope of the experience of not only this agency, but all our partner agencies and stakeholders as well,” she writes. “There was a time when the scientific, legal, policy and other concerns related to this issue had to first be carefully researched and debated in order to provide a valid framework for such action. That time is over. Based on the research and analysis of the data compiled, we must continue to take progressive steps, and do so as quickly as possible as part of the continuing efforts to resolve this complex and challenging issue.”