A map from the Corporation Commission details the quake-related disposal well actions issued on Sept. 18, 2015. 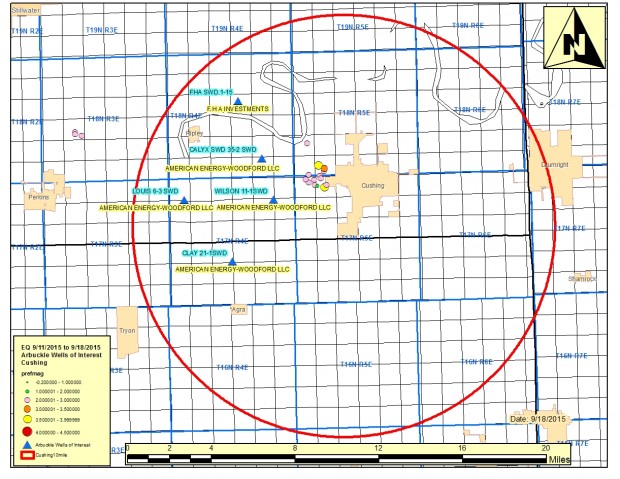 A map from the Corporation Commission details the quake-related disposal well actions issued on Sept. 18, 2015.

State oil and gas authorities on Friday limited activity at five disposal wells after a string of earthquakes recorded near the city of Cushing.

A wave of small quakes has struck near the city in recent days. On Friday morning, a magnitude 3.8 to 4.1-magnitude temblor was recorded. No damage has been reported.

The orders apply to five disposal wells located east of the city, which is home to a major storage hub that holds tens of millions of barrels of crude oil. Two disposal wells operated by American Energy-Woodford were shut down; volume cuts were ordered for the other three, including one operated by F.H.A. Investments.

“None of the wells are what we’d consider to be high volume,” said Corporation Commission spokesman Matt Skinner. “They are moderate volume, and each of them has different reasons suggested in the data as to their risk profile.”