A disposal well in northwestern Oklahoma. 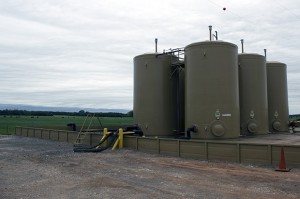 A disposal well in northwestern Oklahoma.

After a swarm of earthquakes recorded near the town of Crescent, which peaked with a 4.5-magnitude temblor on Monday, state regulators asked a pair of oil companies to limit activity at three nearby disposal wells.

“After being informed of the conditions and our concerns, before we even talked about a directive or a technical meeting, all the operators simply volunteered to do whatever is necessary,” he said.

All three wells were in active use and appeared to be injecting waste fluid into the Arbuckle, a zone near an underground formation linked to earthquake activity, Skinner says.

The Corporation Commission recently broadened its scrutiny of disposal wells, which scientists say are likely fueling most of Oklahoma’s earthquakes. That crackdown is likely to continue and expand further.