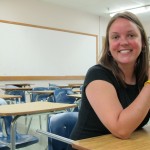 “We were notified during the day. It was on a Friday,” says English teacher Jillian Corey about her layoff notice last May. “Many of us still had to teach class. And the kids were very aware that there was something going on. I was honest with them. I didn’t get into the politics of the situation or the money. I wanted them to understand that it was not a personal situation, because they become very protective of the teachers. It was not for them to be concerned about.” 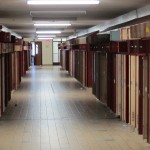 “At Memorial, we had the [most] reduction in force notices given. We lost 29 of our staff. In the English department, it was six alone,” says Corey. 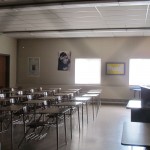 Teaching at Memorial High School is Corey’s first job as an educator. “I certainly thought I was perfectly safe from any sort of harm of this nature. You know, five years is a long time to be in a position,” Corey says. “So I was sad that the investment that I made in this community was being taken away from me.” 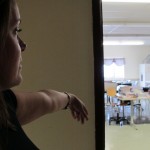 Corey says she still hopes to be one of the 62 teachers the school district calls back for this year. But, “I’ve certainly been looking for jobs in other districts. But when you have 29 English teachers let go alone in Manchester, there are certainly not 29 English teaching jobs in the state of New Hampshire right now.” 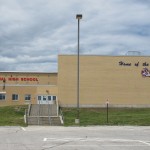 “I don’t pretend to have any sort of plan whatsoever about what’s going to fix this. I know we need more money. I know the kids need more money,” Corey says. “There’s hardly a person in this building that could tell you they have not lost their job, in this district, before. So this is an ongoing issue.”

As part of our weekly “Getting By, Getting Ahead” series, StateImpact is traveling across New Hampshire, gathering personal stories from the people behind the economy.  In our fifth installment, we talk with a recently laid-off teacher in the Merrimack Valley.

But Corey, a 32-year old English teacher, doesn’t work here anymore. She was one of dozens of teachers and staff laid off from the school district last spring. As she gives me a tour of the school, making her way past open lockers waiting for their final summer wash-down, the maintenance staffers and occasional educator aren’t bothered. Even if Corey doesn’t officially work here anymore, no one finds it strange that she would pop in.

When we arrive at her old classroom, however, a locked door shatters the illusion. “Um…unfortunately, I don’t think we’ll be able to get into this particular classroom of mine,” Corey says, as we try to track down another classroom where we can sit down and talk.

Jillian and nearly 140 other teachers were handed pink slips last May after a long budget stand-off between the city and the teachers’ union. It’s a familiar story in the Merrimack Valley, home to New Hampshire’s state government and its largest cities.  Since the economic downturn, the region has felt the brunt of deep cuts to state and local governments, as well as layoffs of public employees.

“Being five years in when I started the school year, I certainly thought I was perfectly safe from any sort of harm of this nature,” Corey says with a rueful chuckle.  “I’m fairly involved in this school.  I have my piddly little garden club where our kids get to play around in the dirt. I was on the faculty council while I was here.  And it made me very sad.”

Now, it makes her worried.  When the economy hit bottom a few years ago, she was able to buy a house in Manchester at an interest rate that a single teacher could afford.  She drives a modest compact car, and doesn’t really live the high life.  She feels like she did everything right.  Yet she lost her job anyway, and now is scraping by on unemployment benefits.

“Unemployment, to be very frank with you, does not cover half of my salary,” Corey says.  “It will not be enough to cover my bills, eventually.  And when I talk about not paying my bills, I’m not talking about, you know, my Gucci bill.  I’m talking about regular, day-to-day, flipping on the lights kind of thing.” But she is quick to add that she would look for work in another profession if she has to, “I’m certainly not going to lose my house over this situation.  That is NOT what is going to happen.”

Recently, she has been given a reason to hope.  The city and school district came up with about $4 million in one-time funding.  They’re calling back 62 teachers.  Corey is hoping to get a callback letter. But she says even if one comes through, teacher layoffs have been so prevalent lately in this area that the long-term future is not bright.

“There’s hardly a person in this building that could tell you they have not lost their job in this district before,” Corey says.  “And I’m very, very serious about this.  So this is an ongoing issue.  Whether I receive my job back this year or not, I will probably be faced with the same scenario next year.  Because it’s band-aids.  We’re putting band-aids on the problem.”

While she is attached to Manchester—and Memorial—Corey is hedging her bets, looking for work in other districts now, too.  But a lot of laid-off teachers are doing the same.  Competition is fierce. In Manchester alone, 29 English teachers were let go, Corey says. “There are certainly not 29 English teaching jobs in the state of New Hampshire right now.”