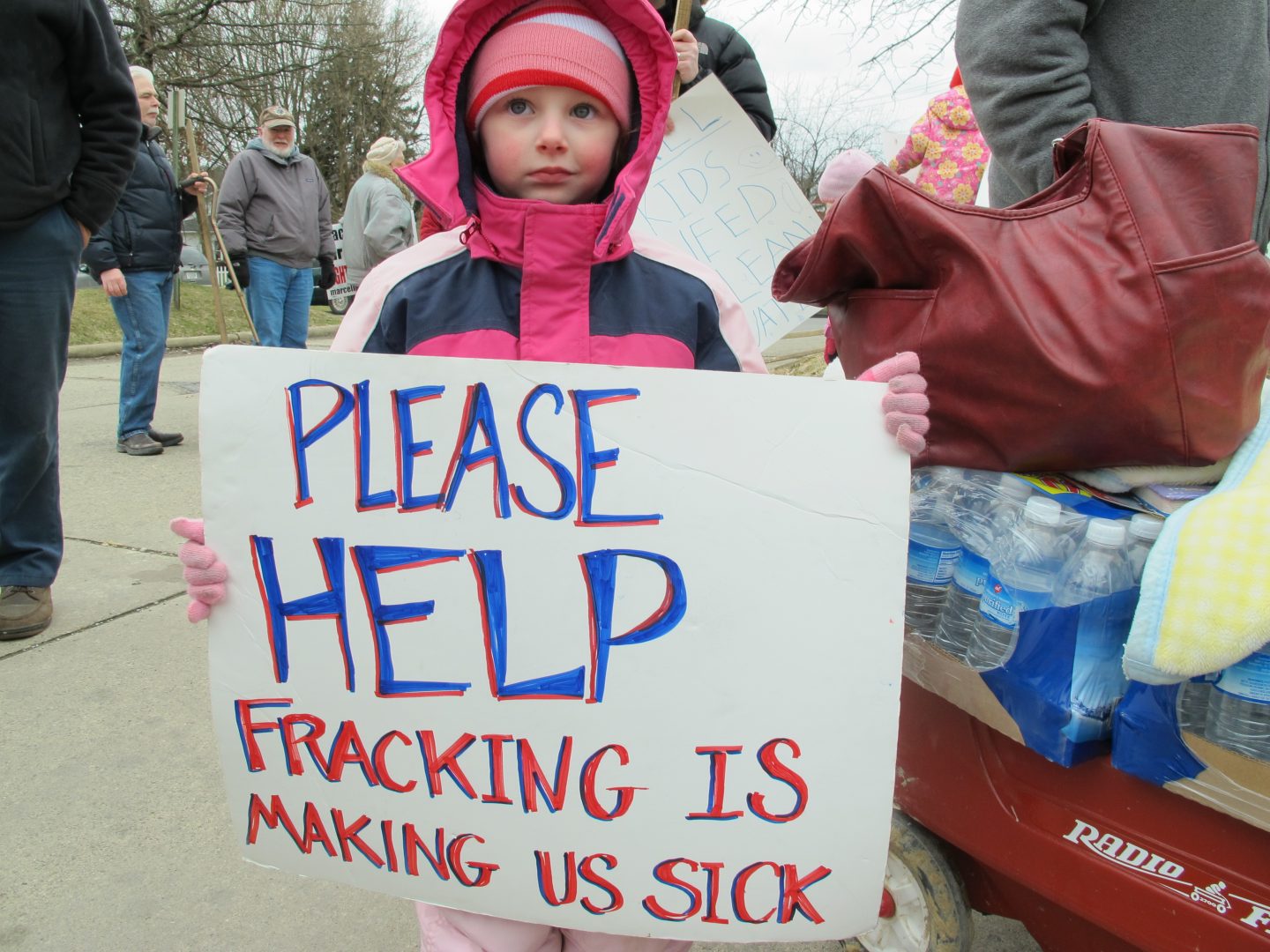 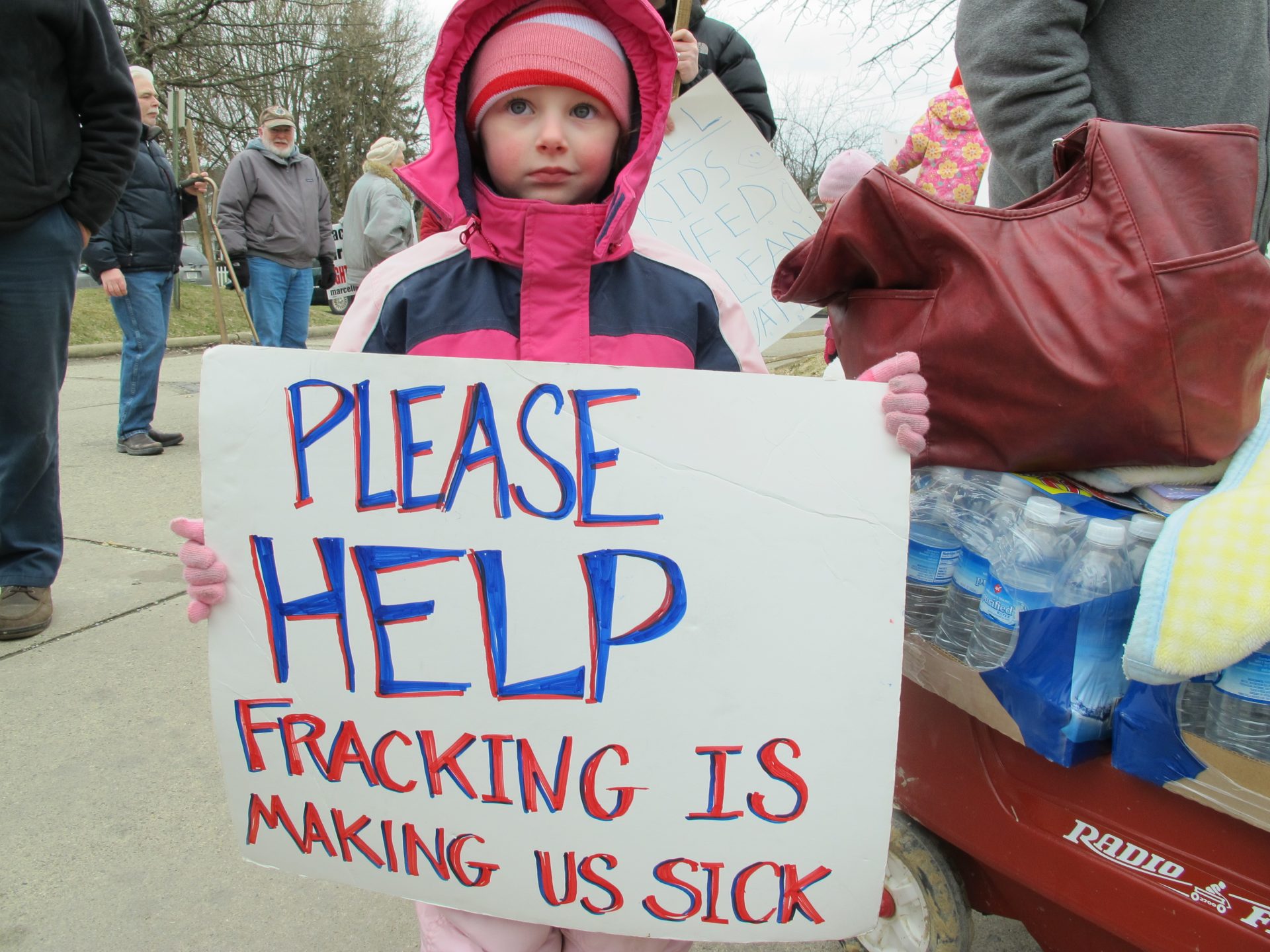 Anti-fracking groups released their latest compilation of research that says the industry harms human health, the environment, and the climate, drawing a stark contrast with Pennsylvania’s Republican candidates for governor who are urging more natural gas production just ahead of the primary.

The 577-page document cites hundreds of studies from universities, nonprofits, government departments, and journalists on the industry’s links to issues including air and water pollution, public health impacts, climate change, noise and light impacts of well pads, and radioactivity.

It says some aspects of the industry can’t be effectively regulated, and the weight of evidence against the industry is so great, it argues, that the only solution is an immediate shutdown.

The eighth edition of the Compendium of Scientific, Medical and Media Findings Demonstrating Risks and Harms of Fracking was released this week by Concerned Health Professionals of New York (a project of the Science and Environmental Health Network) and the nonprofit Physicians for Social Responsibility.

The report follows calls by Republican state lawmakers for more natural gas production to improve national energy security at a time of soaring global energy costs, and it contrasts with the platforms of the party’s gubernatorial hopefuls who are promising to boost output if elected.

State Sen. Doug Mastriano, running for the GOP nomination in next Tuesday’s primary, says on his website that he would encourage investment in the natural gas and coal industries; expand exploration and technology in the Marcellus Shale region; and lift taxes and fees imposed on the industry by Gov. Tom Wolf.

Pa. Republican lawmakers and the U.S. Capitol attack
As part of WITF’s commitment to standing with facts, and because the Jan. 6 attack on the U.S. Capitol was an attempt to overthrow representative democracy in America, we are marking elected officials’ connections to the insurrection. Read more about this commitment.
Sen. Doug Mastriano (R-Franklin) supported Donald Trump’s 2020 election-fraud lie by signing a letter urging members of Congress to delay certifying Pennsylvania’s electoral votes going to Joe Biden. The election-fraud lie led to the attack on the Capitol.

Former Congressman and Hazleton Mayor Lou Barletta, another contender for the governor’s race, says he will be a “champion” of the coal, oil and natural gas industries, and promises to defend them against “liberals intent on taking those jobs away from our citizens.” Montgomery County Commissioner Joe Gale, conservative activist and columnist Charlie Gerow, former U.S. Attorney Bill McSwain, businessman Dave White and cardiothoracic surgeon Nche Zama all have expressed support for Pennsylvania’s fossil fuel industry, fracking and/or pipelines.

The presumed Democratic nominee for governor, Attorney General Josh Shapiro, calls for “responsible fracking” that would expand “no-drill” zones to 2,500 feet from the nearest building; requiring the disclosure of all fracking chemicals before they are used on site; regulation of hundreds of miles of smaller pipelines; and conducting a “comprehensive health response” to the effects of living near fracking sites.

If elected as governor, Shapiro said he would implement the recommendations of the Attorney General’s 2020 Grand Jury report to minimize the hazards of fracking. The grand jury said, “We heard clear and convincing evidence that leads us to conclude that industry operations in Pennsylvania have made our children sick.”

“It’s an undeniable fact that safe, responsible natural gas development is an absolute winner for Pennsylvania’s environment and economy,” said the group’s president, David Callahan. “Our air is cleaner, our economy stronger and our nation more energy secure because of the natural gas being produced from underneath our feet.”

He cited a 2019 study from the Health Effects Institute-Energy, a nonprofit funded by the industry and the U.S. Environmental Protection Agency, which concluded that, “Studies tying shale development to negative public health impacts used imprecise measures, failed to consider other possible factors, and, in some cases, were poorly designed.”

The coalition also cited a 2016 report from the Susquehanna River Basin Commission which said it did not detect “discernable impacts” of natural gas development on water quality. But a year later, an SRBC fact sheet on natural gas development said the potential impacts of fracking were “cause for concern.” A 2020 report did not make conclusions on fracking’s impact on water usage or quality.

Meanwhile, the physicians’ compilation said fracking is now the source of 79 percent of U.S. natural gas production, and is responsible for a range of harms.

“As fracking operations in the United States and abroad have increased in frequency, size, and intensity, a significant body of evidence has emerged to demonstrate that these activities are harmful in ways that cannot be mitigated through regulation,” it said.

The industry is worsening climate change by allowing the escape of methane, the main component of natural gas, which is 86 times more powerful as a greenhouse gas than CO2 over a 20-year period, and is estimated to have caused 40 percent of overall global warming so far, the physicians’ report said.

It also took aim at liquefied natural gas, the form that is being increasingly used in exports from the U.S. to Europe to replace gas supplies from Russia because of its invasion of Ukraine. Chilling the gas to a liquid form requires large quantities of energy, which increases carbon emissions and worsens climate change, the report said.

It argued that the impacts of fracking disproportionately affect environmental justice communities that are more likely to live near natural gas operations.

Other emerging threats from fracking include leaks from idle or abandoned wells, and growing evidence that regulation is not capable of controlling fracking-related issues such as air pollution and even the risk of earthquakes, the paper said.

Although the objections to fracking raised by the compendium are familiar, its accumulation of evidence is designed to persuade policymakers and the public that the industry is dangerous and should be stopped, said Michael McCawley, a professor of public health at West Virginia University, who has studied the health effects of gas-drilling pads.

McCawley said the compendium is a broadly credible source of studies on the negative impacts of fracking. Although he agrees with most of their conclusions, McCawley accused the authors of “cherry picking” studies that help to make their case.

Among the papers that have been excluded from the compendium is his own, finding that the main health impact of gas drilling pads comes from their procession of diesel trucks polluting the air, rather than from the fracking itself. He said his research has been ignored by the compendium since he conducted it in 2011.

“The feeling is that they want to find something that’s associated with the actual drilling operation because that’s an easy bad guy,” McCawley said. “The independent truckers are not an easy bad guy. If you say they are causing all the harm then the people who are drilling are going to say ‘Well, it’s not our fault, we don’t have to do anything about it.’ Everyone is afraid that the industry will have an easy out.”

Joan Casey, an assistant professor of Environmental Health Sciences at the Columbia University Mailman School of Public Health, said the compendium provides ample evidence of a link between fracking and air pollution with harmful particulate matter and volatile organic compounds.

Casey welcomed the evidence of a link between fracking and climate change. “We must act on climate now and continuing to pull more fossil fuels out of the ground hinders that effort,” she said.